Radičová will not run for election in March

SLOVAKIA’S first woman prime minister, whose government collapsed after losing a confidence vote over Slovakia’s approval of changes to the eurozone bailout scheme, will not seek re-election in the next general election, due on March 10, 2012. But until then Iveta Radičová will remain prime minister of an interim government. 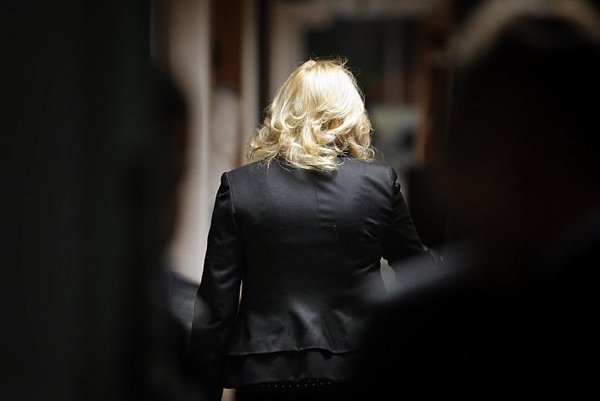 Will Slovaks soon see only the back of Iveta Radičová? (Source: Sme - Tomáš Benedikovič)
Font size:A-|A+0

SLOVAKIA’S first woman prime minister, whose government collapsed after losing a confidence vote over Slovakia’s approval of changes to the eurozone bailout scheme, will not seek re-election in the next general election, due on March 10, 2012. But until then Iveta Radičová will remain prime minister of an interim government.

Radičová decided not to seek the top slot on the election list of the Slovak Democratic and Christian Union (SDKÚ), the position she occupied at the June 2010 general election and which led to her becoming prime minister. For now, she remains one of the SDKÚ’s deputy chairpersons, but she has remained somewhat tight-lipped about her future political prospects.

Shortly after Radičová announced her departure, SDKÚ leader Mikuláš Dzurinda told the media that Radičová is not going to disappear and that she would lead the government until March. The leader of the main opposition party, Smer’s Robert Fico, immediately launched a ferocious attack on Radičová, calling her decision an “escape from responsibility”.

Nevertheless, Radičová said she could no longer offer people what she had in her bid two years ago, which was why she had given up her spot on the candidate list for the forthcoming election. She also pointed out that her cabinet had failed in a vote of confidence on October 11 so she had no right to aspire to the prime minister's post at this time.

“We ended up with an unsuccessful confidence vote in the government,” said Radičová, who also restated that she considered her decision to make the vote on the eurozone bailout scheme a matter of confidence the right one. “This fact is too serious for me to make any decision other than the one I have just made.”

When quizzed by reporters about her political future, Radičová said that she did not plan to establish a new political party and described questions about a possible bid for the presidency in 2014 as premature, the SITA newswire reported.

She thanked the SDKÚ for the opportunity she had been given and said that she had devoted all her abilities and energy to the post of prime minister.

The leaders of the SDKÚ’s coalition partners, Most-Híd and the Christian Democratic Movement (KDH), expressed regret over Radičová’s decision, with Ján Figeľ of the KDH suggesting that he could sympathise with her decision on a political and a human level. Béla Bugár of Most-Híd said that it was a pity to lose Radičová.

“She is the most trustworthy face of the right-wing coalition, it is a pity to lose her,” Bugár said, adding that the prime minister had a demanding job.

At the same time, Bugár used the occasion to warn that without Radičová the right-wing would be weaker, and proposed the creation of a right-wing block or some tighter form of cooperation.

Observers promptly pointed out that the loss of confidence in her government had taken a heavy toll on Radičová and that she might need some more time to come to terms with recent developments.

“What led her to the decision [to quit] is most probably that she has assessed her prime ministerial performance as unsuccessful, though I think that her cabinet was among the most successful in terms of defining and pushing for reform,” the president of the Institute for Public Affairs (IVO) think tank, Grigorij Mesežnikov, told The Slovak Spectator.

According to Mesežnikov, the fact that the government collapsed due to one coalition partner’s withdrawal of support, and that at other times Radičová might not have felt she had her own party, the SDKÚ, fully behind her, means that she could now be feeling bitter.

“On one hand she demonstrated leadership, but on the other hand she tried to do so in a way that would not make relations confrontational,” Mesežnikov said, adding that simple fatigue could have taken its toll on Radičová as well.

Fico, the opposition leader, called the developments which led to the current situation “a natural outcome of the failure of the concept of a broad coalition” and suggested that Radičová had “failed personally and politically”.

“She is a weak prime minister who isn’t able to govern,” Fico said, as quoted by the TASR newswire, adding that Radičová was shirking her responsibility for the chaos in the state and for what he called corruption scandals.

“Fico is no gentleman,” Mesežnikov said in reference to Fico’s unflattering assessment of Radičová’s performance.

However, Mesežnikov said that the situation represented an interesting political scenario: “Fico, for the second time in two years, has lost his target shortly before the elections. First [in 2010] he lost Mikuláš Dzurinda and was quite frustrated because of that, and then de facto lost the elections. He was now ready to attack Radičová as the prime minister but now she will not be on the candidate list.”

Mesežnikov noted that attacks on rivals who are no longer part of the electoral competition have much less effect.

Radičová, who also serves as one of the SDKÚ’s deputy chairpersons, will keep that post until a party congress is held within six months after the parliamentary elections, as required by the party’s statutes. The SDKÚ was quick to announce that its presidium had invited party members who would like to lead its list of candidates to submit their names for primaries. If no one shows an interest, the party’s chairman, Dzurinda, will automatically head the SDKÚ slate in March.

Before the last parliamentary elections Dzurinda withdrew from his party’s candidate list after some unanswered questions about the SDKÚ’s previous funding methods were reopened by Fico. However, in a recent interview with the Sme daily, Dzurinda said he feels ready to make a comeback.

“I have significantly paid the bill for the problems from 10 years ago,” Dzurinda told Sme. “I haven’t felt this moral strength for a long time.”

Dzurinda’s long-term ally Ivan Mikloš, who ran unsuccessfully against Radičová in primaries ahead of the last parliamentary elections in 2010, will not run for the top post on the slate. Nor will Justice Minister Lucia Žitňanská, another of the party’s deputy chairpersons.

Political scientist Michal Horský said that the departure of Radičová will not necessarily have a catastrophic impact on the SDKÚ’s election performance, SITA reported. He suggested that even while she served as prime minister the party was still governed by Dzurinda and Mikloš.

“Considering the style of politics their partners and opponents are using, I do not believe that the SDKÚ will lose its second place [in the popularity chart] in the elections,” Horský told SITA.

Mesežnikov said that the SDKÚ electorate is pretty stable. However, he noted that Radičová appealed to a certain group more easily and effectively than other SDKÚ politicians have been able to. In terms of support, the SDKÚ is what he called a “15+ party” and he said he did not think that the party would sink below 15 percent in the elections. Nevertheless, its clash with Freedom and Solidarity (SaS) over the eurozone bailout might play a role, Mesežnikov added.

Mesežnikov said he disagreed with observers who have suggested that the SDKÚ could perform even better without Radičová than with her.