HOSPITALS might be forced to postpone planned surgeries, merge wards and even layoff nurses if the doctors who are protesting against the Health Ministry’s plan to transform their hospitals into joint-stock companies do not withdraw their notices terminating their employment contracts. Slovakia’s health minister also announced that he is planning to tour the country to persuade doctors not to resign. 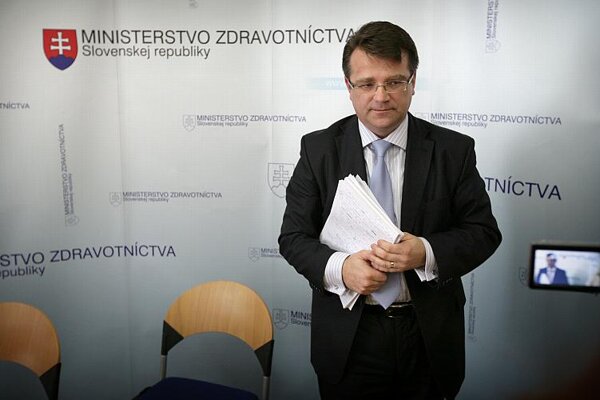 HOSPITALS might be forced to postpone planned surgeries, merge wards and even layoff nurses if the doctors who are protesting against the Health Ministry’s plan to transform their hospitals into joint-stock companies do not withdraw their notices terminating their employment contracts. Slovakia’s health minister also announced that he is planning to tour the country to persuade doctors not to resign.

About a third of the doctors working in state-run hospitals submitted notices en masse in September to demonstrate their opposition to the ministry’s plan to change the legal form of the hospitals and to demand more funding for health care, higher salaries and adherence by hospitals to the Labour Code.

Altogether 2,411 doctors in 34 hospitals out of a total of 6,500 doctors employed in state-run hospitals gave notices to terminate their employment contracts as of December 1.

Recently Health Minister Ivan Uhliarik announced that he will ask the other cabinet ministers to take a clear stance on whether his ministry should continue with steps to transform the hospitals into joint-stock companies. The SITA newswire reported that he is doing so because of doubts about the viability of the reforms after the government of Iveta Radičová lost a confidence vote in parliament on October 11.

The health minister said that as a political realist he needs to have an explicit mandate from the cabinet in the current uncertain situation.

“If the cabinet approves, I'll continue with the transformation in line with the law,” Uhliarik stated, as quoted by SITA. “If I get no mandate, I'll prepare all processes so that everything is ready for a decision by the new cabinet that comes after the early March elections.”

Abandoning the transformation process is one of the key demands of the doctors who filed their notices at the end of September.

An amendment to the law on health insurance companies which took effect in April of this year calls for the hospitals that are run directly by ministries to be transformed into joint-stock companies. The law requires these hospitals to do so by the end of 2011, but that deadline can be delayed by six months in certain cases.

The law stipulates that the state will be the founder and 100-percent shareholder of these joint-stock companies, but that the Health Ministry or another ministry such as the Transport or Defence Ministry will act on behalf of the joint-stock hospitals. The law also states that the new joint-stock companies will be responsible for all past liabilities and claims as well as obligations toward employees. Parliament has already approved €350 million to help settle the debts of the 31 hospitals that are to be transformed.

Uhliarik announced he was planning to tour the Slovak hospitals that appear most likely to be affected by the collective resignation notices.

“I will fight with every doctor to withdraw their notices,” Uhliarik said, as quoted by the Sme daily, with the minister reporting that about 200 doctors have already withdrawn their notices. The ministry advised the hospitals to accept withdrawals of the notices until the end of October, but to start hiring new doctors beginning in November to replace those who are ready to leave on December 1.

Uhliarik said the exodus of doctors could result in a very serious situation, SITA wrote. Hospitals which are left without enough doctors will probably need to combine some wards, for instance trauma and orthopaedic wards, but in that event it is also very likely that hospitals will need to layoff other staff, including nurses, the minister stated after meeting with directors of health-care facilities on October 26.