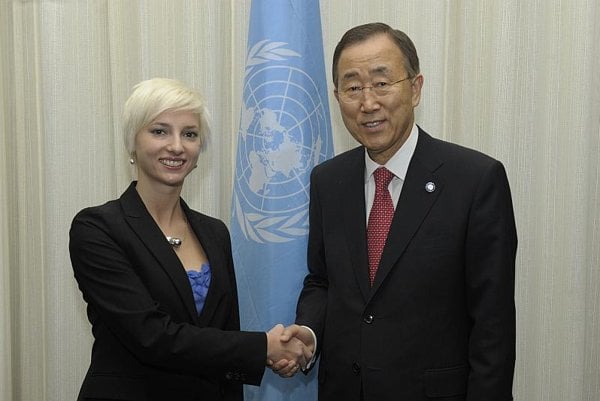 Since 2007, the UN Youth Delegate Programme has been administered by the Youth Council of Slovakia in cooperation with the Education Ministry and the Foreign Affairs Ministry. It provides an opportunity for young people aged 18 to 24 to participate in UN decision-making that has an impact on everyday life. Being Slovakia’s youth delegate is an honorary, volunteer post.

Monika Mareková was chosen to represent Slovakia’s young people at the 2011 edition of the UN programme from October 1-19 and was the fourth Slovak to participate.

The programme provides the opportunity to influence the decision-making processes of the United Nations and to offer ideas and expertise on issues related to young people, Mareková told The Slovak Spectator in an interview.

“There is still a lack of awareness of youth-related issues and in most cases young people are excluded from decision-making processes on issues that affect them, even though half of the world’s population is under 25,” Mareková stated.

In the world of the UN

Mareková, aged 23, is currently in her final year of law studies at Masaryk University in Brno in the Czech Republic. She has also had international experience during her studies, first at the University of Fribourg in Switzerland and more recently at Laurentian University in Canada.

The programme consists of more than just spending two weeks in New York City. Representing Slovakia requires considerable preparation prior to the actual travel in the way of attending various conferences and presenting the Youth Delegate programme to the media and Slovak school teachers. Mareková said some of these duties are continuing since her return from New York, particularly describing her experiences from the General Assembly to Slovak media and young people.

“I chose the topic because discrimination against girls and young women is a problem in developing countries and causes many additional problems that destabilise the entire society,” Mareková explained, adding in the same breath that she is interested in many other pressing global problems as well. Just before she wrote the essay she had participated in a conference on armed conflicts in Moncton, Canada where she heard “an excellent lecture on girls and young women being used in armed conflicts that inspired me to focus my essay on this pressing, but often very overlooked issue”.