Doctors not backing down

WHILE Slovakia’s teachers have curbed their rising frustration and announced on November 3 that they would continue negotiating with the Education Ministry over salaries rather than striking, the 2,000 or more doctors working in state-run hospitals who submitted notices to terminate their employment contracts in protest against conditions within their hospitals show no signs of backing down. 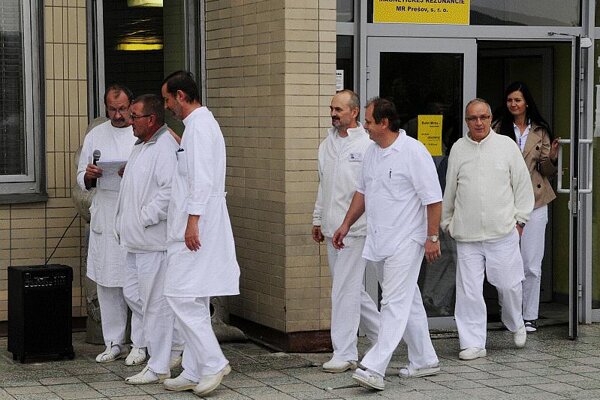 WHILE Slovakia’s teachers have curbed their rising frustration and announced on November 3 that they would continue negotiating with the Education Ministry over salaries rather than striking, the 2,000 or more doctors working in state-run hospitals who submitted notices to terminate their employment contracts in protest against conditions within their hospitals show no signs of backing down.

Health Minister Ivan Uhliarik met with the union representing the physicians on November 2 only to state after the meeting that a fundamental sticking point remained: the doctors insist on a halt to the process of transforming the state-run hospitals into joint-stock companies, while the government firmly believes that changing the hospitals’ legal status will improve their management and financing.

“Our meeting [with the minister] has not moved us a single step towards withdrawing our notices,” said Marian Kollár, the chairman of the Medical Trade Unions Association (LOZ).

Defence Minister Ľubomír Galko, after a meeting of the cabinet on November 2, said that transformation of state-run hospitals and medical facilities will continue, with the legal status of 20 facilities to be changed before the end of the year, the SITA newswire reported. The minister also announced that these 20 hospitals will receive the funds needed to pay off their current debts. The opposition Smer party is opposed to changing the hospitals’ legal status and made an attempt in parliament in October to kill the process based on a proposal submitted by former health minister Richard Raši.

Meanwhile, the doctors’ union and the chamber of nurses and midwives clashed over a piece of draft legislation that would increase the salaries of nurses, with the doctors calling it an “unsystematic move that discriminates against other professional employees in the health-care sector”. The Slovak Medical Chamber also tabled objections to the draft that would bring higher salaries for nurses.

At the end of September, 2,411 doctors working for state-run hospitals across Slovakia submitted notices to terminate their employment contracts, which are due to become effective on December 1 after a 60-day period.

Along with stopping the legal transformation of the hospitals, the doctors want higher salaries. Minister Uhliarik has described their wage demands as unrealistic while the offer on the table from the state has been rejected by the doctors.

The Slovak Medical Chamber called on President Ivan Gašparovič, who now has a stronger voice in the governing process because of the restricted mandate of the government since it fell on October 11, to halt the transformation process. The president responded that he wants to discuss the issue further with the government, directors of the medical facilities and doctors.

Prime Minister Iveta Radičová stated after the cabinet meeting on November 2 that she does not think Gašparovič has any serious objection to continuing the transformation process, while adding that the government and the president must still discuss whether it is necessary to transform some of the health-care facilities, SITA reported. Radičová restated that changing the legal status of the hospitals does not mean their privatisation. Nevertheless, the Hospodárske Noviny economic daily reported earlier that Gašparovič had recommended to Radičová that this issue should be dealt with by the government that emerges after the March general election.

Minister Uhliarik and LOZ differ on whether doctors have been withdrawing their notices. Uhliarik reported on November 2 that about 300 doctors had withdrawn their notices to terminate their employment contracts and stated that the directors of the hospitals currently have about 2,000 while Kollár of LOZ insisted that the doctors are not changing their minds.

Kollár stated that the hospitals have 2,386 notices, that only 141 doctors have withdrawn their notices and an additional 116 doctors have submitted notices to their employers, SITA wrote.

The minister warned that doctors who did not withdraw their notices before the end of October might never return to their positions because the hospitals were instructed by him to begin hiring new staff in November.