AFTER years of politically-charged debate over highway construction, a new 46-kilometre dual carriageway, dubbed Pribina after a historical Slav, has now been added to Slovakia’s highway network, which over the past two decades both foreign investors and Slovak travellers have sorely hoped to see expand across the country. The stretch of the R1 road connecting Nitra with Tekovské Nemce is the first tangible product of a public-private partnership (PPP) project. It was constructed over 26 months and carries a price tag of €800 million. 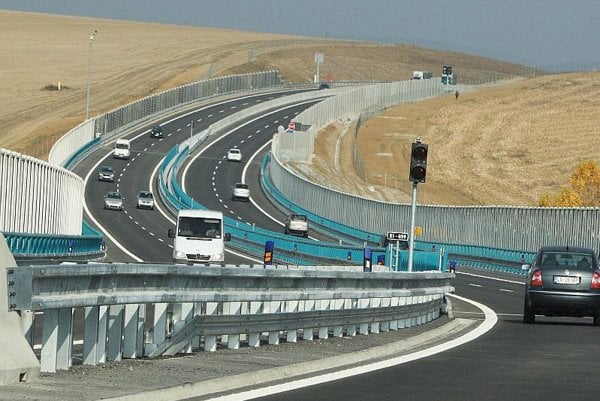 AFTER years of politically-charged debate over highway construction, a new 46-kilometre dual carriageway, dubbed Pribina after a historical Slav, has now been added to Slovakia’s highway network, which over the past two decades both foreign investors and Slovak travellers have sorely hoped to see expand across the country. The stretch of the R1 road connecting Nitra with Tekovské Nemce is the first tangible product of a public-private partnership (PPP) project. It was constructed over 26 months and carries a price tag of €800 million.

The Pribina section is the longest and fastest-built highway stretch constructed at one time in Slovakia, and has the heaviest price tag, said Transport Minister Ján Figeľ as he ceremonially opened the road on October 28, after a one-month delay.

“The current government and all future governments should continue with significant public investments, but in a sustainable manner which is advantageous for the state,” Figeľ stated.

The ribbon-cutting ceremony was not free of political tension and controversy as Figeľ had invited his predecessor, Ľubomír Vážny of the Smer party, to attend even though Figeľ from the Christian Democratic Movement (KDH) had roundly criticised Vážny for what he called “overpriced” contracts. The chairman of Smer, Robert Fico, was also asked to speak at the ceremony.

Prime Minister Iveta Radičová was critical of Smer’s presence at the ribbon-cutting, seeing more than an act of political politeness being behind the invitation. Fico responded that he did not understand the criticism since the project had been initiated under his government.

“We thank all the governments and parliaments that dared to enter this project,” stated Speaker of Parliament Pavol Hrušovský of KDH at the ceremony, as quoted by the Sme daily.

“The overall problem has been that highway construction is quite a politicised process and it would greatly help if the whole process were freed of politics,” Ľubomír Palčák from the Transport Research Institute (VÚD) told The Slovak Spectator.

Pribina, which links 14 municipalities in the Nitra Region with six interchanges and 84 bridges, was opened prior to the annual traffic rush linked to Slovakia’s All Saint’s Day public holiday. The Granvia construction consortium claimed that the new road will shorten the drive between Nitra and Tekovské Nemce by 26 minutes. The road is also expected to contribute to road safety since the previous single-lane road was nicknamed the “death route” because of its high number of fatal accidents.

The road had been expected to open in late September but Granvia did not provide all the required documentation to the ministry on time, a mistake that will cost the company about €8 million.

The PPP project for the R1 dual carriageway has an overall length of 51.6 kilometres divided into four sections: Nitra to Selenec, Selenec to Beladice, Beladice to Tekovské Nemce and a bypass road around Banská Bystrica. The first three stretches were opened to traffic on October 28 and the bypass should be ready in July 2012. Once all the sections are completed, drivers will be able to drive from Bratislava to Banská Bystrica on an uninterrupted, multi-lane road, the SITA newswire reported.

Granvia won the PPP concession and started construction work in 2009. Its total investment for design, construction, operation and maintenance of the highways is €1.8 billion, and construction costs make up €900 million of that amount. Remuneration to the Granvia consortium, 50-percent held by VINCI Concessions, will be in the form of an annual royalty payment of around €125 million from the state for the next 30 years, SITA reported.

PPP only used for the R1

The only PPP project that resulted in actual construction of highway stretches is the one awarded to Granvia for parts of the R1 dual carriageway. The government of Robert Fico had launched three PPP projects but the incoming Radičová cabinet in 2010 viewed this method of financing, building and operating highways as too expensive and completely killed two of the projects: the so-called first PPP package to build five stretches of the D1 covering 75 kilometres between Martin and Prešov, and the third PPP package to build about 30 kilometres of the D1 between Hričovské Podhradie and Dubná Skala near the city of Žilina. Of the three PPP projects, the third was considered to be the most technically-demanding because it included a tunnel almost 7.5 kilometres long between Višňové and Dubná Skala.

After Figeľ became transport minister, the highway stretches in the two cancelled PPP projects were divided into smaller portions and individual tenders were announced. The ministry’s stated plan is to complete the D1 highway and connect Bratislava and Košice with a backbone highway by 2017.

Nevertheless, the fall of the Radičová government and the uncertain outcome of the early elections in March 2012 might significantly modify future highway plans, with Fico perhaps toying with the idea of returning to the PPP method. At the moment, the Transport Ministry is continuing to prepare tenders as well initiate highway construction based on its plans for 2011-2014.

“Highways are not an interest of political parties, but primarily Slovakia’s citizens,” Martin Krajčovič, the ministry spokesperson, said on October 20, as quoted by SITA, adding that the ministry has enough funds approved for highway construction projects.

The construction of another section of the D1 highway will start soon as the state signed a contract with a €114.6 million price tag on November 2.

The contract between the National Highway Company (NDS) and the Doprastav-Strabag consortium covers the construction of a 11.2-kilometre stretch between Fričovce and Svinia in Prešov Region. Doprastav-Strabag won the public tender with its €114.6 million bid after another bidder, Hant, was excluded from the tender. The construction, which the ministry said will cost about €153 million less than if it had been carried out via a PPP is expected to be finished in November 2014, the TASR newswire reported.

Earlier this year, the National Highway Company signed a contract with the Žilina-based Váhostav-SK construction company to build an almost 16.5-kilometre-long section of the D1 highway from Dubná Skala to Turany near the city of Martin in northern Slovakia.

Váhostav-SK, which submitted the lowest bid in that tender, will build the road for €137.75 million, excluding VAT, which is 59 percent – or nearly €200 million less – than the initially estimated costs at €334.72 million, SITA reported.

The EU Cohesion Fund will finance 85 percent of the costs and the remaining 15 percent will come from the state budget via its Operational Programme Transport. Construction of the Dubná Skala-Turany section is the most urgent of all the yet-to-be-built highways sections in Slovakia, SITA wrote.

“I personally think that Slovakia has to rely on multi-source financing of its highways since today we still have a large share of unfinished highways,” Palčák told The Slovak Spectator. “Based on our calculations we need €20 billion for finishing highways and dual carriageways.”

Palčák added that the state must consider how much it has at its own disposal in the state budget, as there is perhaps up to €1 billion available from the EU-funded operational programme for highways and the state will need to find other financing sources for completion of the highways and dual carriageways. For this reason, Palčák views PPPs as a viable financing method that the country should certainly use, adding that highway construction debate has been over-politicised.

Palčák argued that the debate over whether the R1 sections were over-priced or not via the PPP method is being made using comparisons that are not proper because the classic way of financing highways and the PPP method are quite different and require a more complex analysis in order to make a valid comparison.

Regarding the sections of the D1 that run from Žilina eastwards, for which a recent contract has been signed, Palčák does not see any criticism from the current opposition or anything that might halt the ongoing process.

“I think that for the benefit of Slovakia it is important, regardless of the elections, to finish the ongoing processes [of tenders and construction],” Palčák stated, related to stretches of the D1 from Jánovce to Jablonov and a complicated section from Turany to Dubová near Ivachnová. But construction of the most difficult but most important section of the D1, from Višňové to Dubná Skala, will take at least five years to complete according to Palčák.

“If one wants to talk about actually finishing up the D1 all the way from Bratislava to Prešov, then it is decisive whether construction of this section starts,” Palčák stated, adding that if next year’s election does not significantly affect construction plans then the D1 could be completely finished by 2017.

Slovakia’s Office for the Fight Against Corruption recently filed charges against a person identified only as P.H. for manipulating an analysis of the costs of using a PPP project for construction of the D1 motorway between Martin and Prešov, Interior Minister Daniel Lipšic (KDH) announced on October 28.

The analysis was allegedly falsified in March 2010 when the ministry was headed by Smer nominee Vážny. The ministry had commissioned Wood & Company to draw up an analysis comparing the costs of financing that section of the D1 motorway from public sources with use of the PPP method. Lipšic reported that the analysis found that using the PPP method would cost €546 million more but that P.H. then manipulated the analysis so that the difference was only €29 million, which resulted in the ministry opting for the PPP project, TASR reported.

Jana Liptáková contributed to this report