MOST people cannot imagine breeding amphibians, insects and big spiders in a city-centre flat but doing so is a long-term passion for 25-year-old Marcel Bodnár, a cook from Košice. 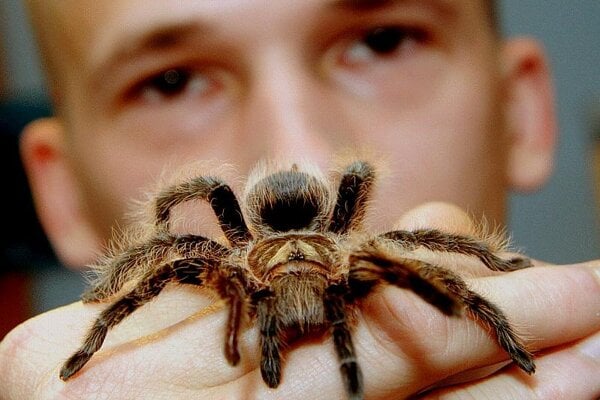 MOST people cannot imagine breeding amphibians, insects and big spiders in a city-centre flat but doing so is a long-term passion for 25-year-old Marcel Bodnár, a cook from Košice.

Bodnár told the TASR newswire that he started as a young boy with aquarium fish but gradually expanded his menagerie to include reptiles, various kinds of spiders and insects and several other exotic species. In his small room with a balcony in a Košice apartment building, his collection includes a tortoise, beetles, walking-leaves (tropical insects with flattened leaf-like bodies), newts, a piranha and axolotls, an aquatic salamander native to the western United States and Mexico.

When asked whether such an extraordinary “farm” can be managed in a modest city accommodation, Bodnár gave a clear yes “if one’s parents are okay with it – and mine take it as normal already”. Bodnár was 10 years old when he became fascinated with exotic animals. The hobbyist buys new species or adds to his existing collection through exchanges, saying a large exotic spider could cost between €3 and €100. “The price depends on the size and species,” Bodnár commented, adding that he likes the extraordinary character of his hobby and that “not everyone does this”.

He told TASR that breeding and maintaining exotic animals and insects is not necessarily expensive because he raises some insects as food for his other pets. “It costs me a maximum of €15 a month,” he said. He buys frozen items from pet-shops for some of his creatures and he feeds his cockroaches, used as snacks for larger animals, dried rolls and kitchen leftovers. Although Bodnár is an experienced breeder he confessed that parts of his menagerie have escaped several times. “Almost all species have run away; usually when I clean their vivariums and I am not careful or when I forget to close the door,” he admitted. Bodnár noted that his exotic pets are eye-catching but when he wants to enjoy games and petting he reaches for his trusty dog.