'Everybody is a walking journalist'

Everybody who wants to be a journalist can become one in the digital age, says Pulitzer-Prize-winning American journalist and academic Joshua Friedman. 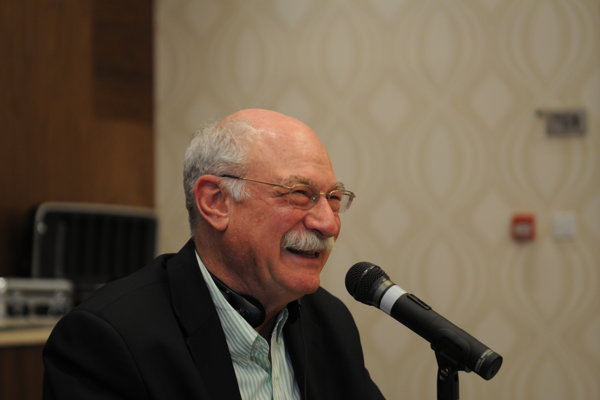 Despite that, he says, journalism is becoming a less satisfying and less attractive profession in the US nowadays due to technological and economic changes. Shortly before he set off for a visit to Slovakia in mid November 2011, Friedman spoke to The Slovak Spectator about this and other challenges that journalism now faces.

The Slovak Spectator (TSS): You were awarded the Pulitzer Prize for your series covering the plight of the starving in Africa in 1985. How has the coverage of this problem in the media changed compared to when you were covering it?

Joshua Friedman (JF): Nowadays, it’s no longer a shock to see people dying of hunger. When I covered it in the mid 1980s it was considered very unique to see this, especially on television. But we’ve been through some other humanitarian disasters since then and because of technological changes so many of these things can be seen very often on television. So we’ve become numb to this type of a story.

TSS: The media now tends to use amateur pictures when covering even major stories, such as the recent death of Muammar Gaddafi. How does that affect journalism?

JF: The nature of coverage has changed a lot, for a variety of reasons. When I covered the situation in Africa, for example, I was given a lot of time by my newspaper to research and do a lot of reporting before I had to begin my story. And I’d had a professional career in which I learned, starting at the bottom, how to cover complicated stories. But now many of the reporters that you would find covering such a story are amateurs – young people with not much experience. Also, when I was in Africa it was expensive to have all the equipment to take pictures and then send the images back to the US. We didn’t have such a thing as a digital camera. Now, anyone with a cell phone can take a picture. That means everybody is a walking journalist. That’s good in one way, but on the other hand it means that they don’t have the professional skills necessary to determine what they’re looking at or to explain to the viewer or the reader what the situation is. Also, media employers don’t have as much money anymore. It’s very expensive to have a foreign correspondent in Africa. So they just don’t send people to cover big situations like the one I covered and they rely on people who happen to be on the scene to supply whatever they manage to record on their telephone. That way you’re not getting a broad perspective on the story any more. On the other hand, you’ve got more people available to observe whatever is happening.

TSS: What challenges does blogging pose for the traditional media?

JF: Blogging is a platform on which people can send out information. It means that anybody who wants to be a journalist can be a journalist, which is in one way very good. On the other hand, there is no editor, so that traditionally the writer or reporter would prepare the information and then it would have to be looked at by another person, an editor, who could ask questions about what’s unclear and what needs to be accurate. Now everything goes out on the web immediately, without a second person looking at it, so it makes it harder to ensure that what you’re reading is reliable. So the negative side is that there can be confusing or contradictory information which may or may not be accurate. But [blogging] is good in a situation when the government is trying to control the press and that makes it much harder for the government to control the press.

TSS: Did this change the expectations of media audiences?

JF: I think so. People who grow up looking at information on digital media tend to read differently than people who read just newspapers. If you’re reading a newspaper, it’s slower and more deliberate. People who grow up with digital media tend to jump around on different things, they’re multi-tasking, but they have a shorter attention span. They’re not as patient in reading a very long story. Everything has to be presented to them in smaller bites.

TSS: Over the time you have been active in journalism, what were the most important changes that occurred in the US media market and how did they affect the media market in Europe?

JF: In the course of my entire career at first things were getting better and towards the end things began to deteriorate in the media industry.

A lot of that had to do with the ownership of newspapers. At first, when you didn’t have any digital information available, newspapers had a monopoly on in-depth journalism. People would watch television – but there were only three networks in the US – to get some of the news. But they knew that the newspapers would have more comprehensive coverage. There were fewer sources of information. But the newspapers were making a lot of money and they began to spend more and more on doing very responsible journalism. So for instance at the time I was reporting in Africa in the mid 1980s if you were working at a newspaper which had a lot of money, which is what I was doing, you could spend months or up to a year on a particular project. That meant you could do a lot of in-depth investigation.

What happened after that was a combination of technological and economic change. Technologically, in the US, people began to get cable television, and all of a sudden, instead of having three networks, they had a number of sources. That eroded the economic base of the three traditional networks, because they no longer had a monopoly on advertising. In the 1990s and early 2000s we had a huge economic boom in the US, fuelled mainly by borrowed money. Credit was very available, so corporations began to buy newspapers that had been run by families. The ownership of newspapers went to people who often weren’t from that particular community, as it had been before. At the same time, the government, which was under the control of George Bush Jr, began to relax the regulations for broadcasting in terms of ownership. So when I was starting out, newspapers and television networks were usually owned separately. Now large corporations could be buying up newspapers and television stations, and ownership became concentrated. In order to do that, they borrowed a lot of money.

Then, starting at the end of George Bush’s term, in 2008, we had a credit crisis in the US. The economy began to collapse and they couldn’t borrow any more to pay off their debts, plus the economy slowed down the advertising. As a result, they had to start saving money. So they cut back on expensive journalism: investigations, foreign correspondents, anything that didn’t support fundamental journalism. We lost a lot of the sophisticated journalism that we were doing. Instead of spending months on a story the reporter had to spend just hours. For instance it’s very expensive to have foreign correspondents, so they began to eliminate them. Then the public was less informed about Iraq, Afghanistan, and all the important issues that American voters have to know about. And it’s a very critical problem now in the US.

The other factor was the rise of digital media and now social media. The young people tend not to read the newspapers, they get their information on the internet. So newspapers were not only losing money because advertising was down, but also their circulation was dropping. So in some ways what’s happening to us in the US is probably what will happen in the future in Europe. It’s kind of a peek into the future for people in Slovakia.

TSS: What about the actual work of journalists, how did these changes affect it?

JF: Many of the older journalists lost their jobs, because they make more money. All these family companies that were bought by corporations would offer what they called buy-outs to the experienced journalists. They got a certain amount of money as a severance to leave. And then they would be replaced with younger people who would be paid much lower salaries. As a result, people doing journalism are less experienced and they earn less money and have less time to produce stories. And in the digital arenas they have to write shorter stories. So it’s made the practice of journalism in many ways much less fulfilling and less satisfying.

TSS: What are the main challenges that journalism graduates face now when entering the market?

JF: The biggest challenge is to find a job, because there are fewer jobs available now in the US overall and certainly in the journalism business. That’s because the traditional sources of jobs for journalists – newspapers – are shrinking, as I explained before. Some get jobs in the digital media but those places don’t pay very much money, so a lot of young journalists either go out of the business, or they work part-time and they have to take a different job to earn more money. It’s becoming a less attractive profession. When I was younger, it was a job in which I earned enough money to support my family with children. And I don’t know if that can be said now. It’s harder to do that.

Joshua Friedman will give an open lecture in Bratislava on November 15 organised by the Petit Academy Foundation, the Tatra Banka Foundation and Comenius University. For more information, visit www.uniba.sk/prednaska.