THE PROSPECT of a slowing economy has put Slovakia’s ambitions to reduce its public finance deficit for next year on thin ice, with the country’s governing politicians scratching their heads over how to mend a predicted deficit hole that could be as big as €600 million. The reduced powers of the government, now that many of its authorities have passed to the president in the run-up to next March’s earlier-than-planned general election, look set to complicate the situation. 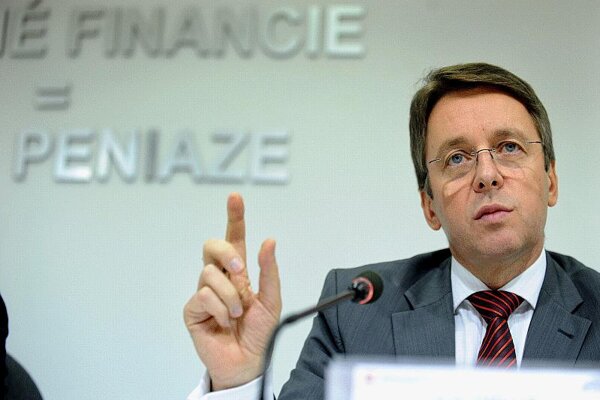 THE PROSPECT of a slowing economy has put Slovakia’s ambitions to reduce its public finance deficit for next year on thin ice, with the country’s governing politicians scratching their heads over how to mend a predicted deficit hole that could be as big as €600 million. The reduced powers of the government, now that many of its authorities have passed to the president in the run-up to next March’s earlier-than-planned general election, look set to complicate the situation.

The Finance Ministry revised down its estimate for economic growth in gross domestic product for 2012 from 3.4 percent to 1.7 percent on November 4 in response to turbulence in the financial markets and the declining economic outlook for the eurozone. As a result, Finance Minister Ivan Mikloš warned that next year’s public finance deficit could grow to 4.6 percent of GDP.

Parties across the political spectrum now agree that public spending cuts are necessary, though they differ widely over where those cuts should be made. With parliamentary elections due on March 10, the debate over the budget is assuming a more political character.

While Mikloš says that if there had been no early elections, an unfettered centre-right government would have been able to meet the original planned deficit target of 3.8 percent of GDP, the opposition Smer party has attacked the government of Iveta Radičová for what it called an inability to handle the public finances.

“It is a huge sum,” Radičová conceded in reference to the estimates on November 3, adding that her government would not pretend that it could meet the original target for deficit reduction.

The Finance Ministry’s reassessment of the country’s forecast economic growth in 2012 was the second adjustment it has made in just a short period: in late August the ministry cut its previous 4.4-percent estimate to 3.8 percent after growth in Germany stalled and uncertainty spread about the future of the eurozone. The ministry now expects the country’s economy to grow by 2.7 percent in 2013 and by 3.6 percent in 2014.

“It is assumed that growth in Germany could slow or completely stop in the fourth quarter of 2011 and the first quarter of 2012,” states an analysis by the Financial Policy Institute (IFP), part of the Finance Ministry.

According to the IFP, the situation in financial markets has not calmed since August and based on soft indicators this is now flowing into the real economy of Slovakia’s trading partners.

Mikloš explained that apart from the expected slower growth, an agreement with municipalities that granted towns and villages an additional €60 million as well as an agreement with the Freedom and Solidarity (SaS) party to cancel transfers to health insurance funds by the voluntarily unemployed will also add to the deficit.

“For me the important thing is that the deficit swells only by an unavoidable degree,” Mikloš said, as quoted by SITA, adding that if the budget draft foresees a deficit exceeding 4.6 percent he will withdraw it from parliament. However, Mikloš added that a deficit of 4.6 percent instead of the previous target of 3.8 percent would not necessarily mean that Slovakia’s creditors would regard the country as a less credible debtor.

The minister is investing some hope in a constitutional amendment now before parliament that would cap the deficit. It sets an initial limit on public debt at 60 percent of GDP, with the limit being reduced by a further 1 percentage point per year from 2018 until it reaches 50 percent of GDP. If a government were to hit the 60-percent debt ceiling, it would face an automatic no-confidence vote in parliament.

The draft legislation also triggers a series of preliminary steps as debt approaches the limit. The finance minister would have to write a letter of explanation when debt reached 50 percent of GDP, along with proposed solutions for its reduction. If the debt then grew to 53 percent, the government would be obliged to adopt a package of measures to reduce it, as well as to freeze state salaries. At 55 percent, spending would be frozen in the next fiscal year. If debt reached 57 percent of GDP, the government would be obliged to table a balanced budget.

Mikloš also foresees additional cash coming from higher revenues from some taxes, such as the excise tax on alcohol and real estate tax. It is here, however, that Smer chair Robert Fico chooses to differ, claiming that “the government of Iveta Radièová and Finance Minister Ivan Mikloš are not suitable to manage the public finances”. Fico argues that the centreright government is implementing consolidation at the
expense of ordinary people.

“To come up with proposals to increase taxes on consumption is the easiest thing because people cannot defend themselves,” Fico said, as quoted by SITA.

The Smer leader restated that his party would push for consolidation through heavier taxes on banks and companies with high profits, as well as through a tax on dividends paid to private individuals. He also envisions higher taxes on people whose income exceeds €33,000 per year.

The ruling parties tend to agree that it is better to have a budget for 2012 with a higher deficit than force the country to operate based on a provisional budget.

“Our highest priority is that the budget gets passed, even if this is without additional measures and would mean a deficit of 4.6 percent next year,” said Jozef Kollár, caucus chairman of the Freedom and Solidarity (SaS), one of the ruling parties.

The Radièová government collapsed after SaS refused to support a two-in-one vote over changes to the eurozone bailout mechanism and confidence in the government on October 11.

The IFP notes that a significant slowdown could affect Slovakia’s labour market as well. It estimates that employment might drop by 0.2 percent, in contrast to a 0.3-percent increase that had previously been forecast.

The number of unemployed Slovaks grew in September and the country’s unemployment rate rose to 13.37 percent from 13.13 percent in August, the Central Office of Labour, Social Affairs and Family (ÚPSVAR) announced on October 20. In September, district job centres in Slovakia registered more than 390,500 people as unemployed, including 34,025 school leavers.

The unemployment rate is the highest in six years, said David Dereník, an analyst with UniCredit bank, as reported by the TASR newswire. “Lines at the labour offices will not get shorter; we even expect a moderate increase in the jobless rate,” Eva Sadovská of Poštová Banka told The Slovak Spectator, adding that the high unemployment rate will also make consumers more cautious.