The second summer after recession - but is Slovakia facing another?

While 2009 witnessed the most severe recession in Slovakia since the fall of the Iron Curtain, by as early as 2010 the country was back on track, with one of the strongest annual recoveries among EU members. Both the swing down as well as the subsequent recovery were functions of external demand, which makes and breaks the economic fate of the small and extremely open Slovak economy. The eurozone sovereign debt crisis of 2011, in which Slovakia played a notorious role as near-circuit-breaker, then set the whole European economy back on track for the deceleration of growth. 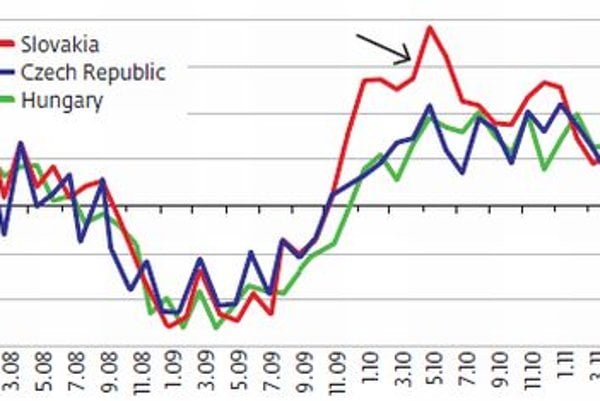 During the 2010 recovery, industry in Slovakia fared notably better than in comparable neighbouring countries Annual growth in manufacturing production (in%)
Font size:A-|A+0

While 2009 witnessed the most severe recession in Slovakia since the fall of the Iron Curtain, by as early as 2010 the country was back on track, with one of the strongest annual recoveries among EU members. Both the swing down as well as the subsequent recovery were functions of external demand, which makes and breaks the economic fate of the small and extremely open Slovak economy. The eurozone sovereign debt crisis of 2011, in which Slovakia played a notorious role as near-circuit-breaker, then set the whole European economy back on track for the deceleration of growth.

Year of global slowdown coupled with yet another electionh2>
As if this was not enough for a country where over one quarter of workforce is employed in export-driven manufacturing industries, in 2012 Slovakia is bracing itself for another general election. Though a politically legitimate choice, the vote comes in the midst of a precarious period of a three-year deficit-cutting plan that the government of Prime Minister Iveta Radičová successfully embarked upon in 2011. As the rating agency Moody’s briskly pointed out after a no-confidence vote took down the current government, such an occurrence is potentially a negative credit event - especially if it influences the deficit reduction plan.

No longer the lowest sovereign spread in the CEE

In the meantime, the threat of veto during the ratification of the enlarged EFSF in parliament coupled with loud domestic political debate on the issue earned Slovakia attention on the credit markets, which now price the Slovak sovereign risk at levels almost comparable with Poland, which is however rated two notches below Slovakia. When judging the year in review, it is hence apparent that amid a still uncertain and rather fragile global economic environment domestic Slovak quarrels among right-wing coalition partners have made the situation even more challenging.

In order to better understand the current situation of the Slovak economy, it helps to dissect the results for 2010, which at first sight recorded an impressive real GDP growth of 4 percent.
However, the figures for overall household consumption were rather stagnant, down by 0.3 percent in real terms for 2010. Two major drivers of economic growth in 2010 were external demand, with exports growing at a real annual pace of 16.4 percent, and an increase in fixed assets, which were up by a real annual pace of 3.6 percent. After a 15.5 percent annual drop in industrial production in 2009, even the robust recovery of export demand only soaked up the unused extra production capacity. As a result, such a structure of economic growth did not generate many news jobs. According to ILO (International Labor Organisation) methodology, employment in Slovakia was actually down by 2 percent in an annual comparison for 2010.

Having experienced double digit growth, the double digit recovery in industrial production in 2010 and early 2011 is almost self-explanatory. However, when looking at regional peers that are similar not only in the extent of their openness to exports but also in terms of where the export demand comes from, one can clearly see that benefits stemming from the euro helped to increase Slovakia’s competitiveness. In 2010, the pace of Slovak manufacturing production was twice as strong as in Hungary and the Czech Republic. Foreign exchange stability, lower interest rates and lower transaction costs in foreign trade thus fed into the improved competitiveness of Slovak exporters vis-à-vis their comparable regional partners.

After two years of record low inflation, the pace of consumer price growth gained traction due to developments in the global commodity markets, as well as the low base effect of the previous year. However, the ongoing uncertainty in the labour market helps to explain why, after taking out the increases in regulated energy prices, domestic demand inflation pressures remain almost nonexistent and should help to alleviate inflation in 2012.

Ongoing salient recovery of manufacturing production eventually, with a necessary time lag, brought about the fist minor increase in employment at the end of 2010, with employment growth accelerating to 2 percent in the first half of 2011. This was the strongest pace of job creation since 2008, a result of six consecutive quarters of real GDP growth exceeding levels of 3 percent (3.4 percent in the second quarter of 2011). However, with signs of significant slowdown in the eurozone in the second half of the year, the first warning signs about the end of this Slovak jobs boost arrived in autumn, as the rate of registered unemployment (13.4 percent) accelerated to the highest levels seen since June 2004.

Rating agencies were quick to warn of the consequences of early elections. After the no-confidence vote in the Slovak government, Moody’s warned: “The collapse of Slovakian Prime Minister Iveta Radičová’s government is negative for the country’s debt rating. It increases uncertainty and jeopardises the fiscal consolidation targets the Radičová government had committed to achieving,” Moody’s said in its Weekly Credit Outlook. PM Radičová’s government had committed to lower the budget deficit from 7.9 percent in 2010 down to 4.9 percent in 2011, then to 3.8 percent in 2012 and below 3 percent in 2013. Slovak FinMin has prepared a draft budget for 2012, which originally assumed growth as strong as 3.4 percent, and narrowing of the budget deficit to 3.8 percent of GDP in 2012. However, it is increasingly likely that growth next year will be significantly lower than originally forecast, resulting in the need to seek further expenditure cuts in order to maintain the deficit reduction targets. According to some commentary, finding the political will to seek further expenditure cuts might be challenging, if not impossible, ahead of the early elections.

Significant slowdown in the eurozone’s expected economic growth in 2012 brings commensurately pessimistic expectations for Slovakia’s economic outlook. Apart from bleak prospects for the labour market, the major pain both for politicians and for households will come from the need to push forward additional deficit reduction measures. The major opposition party suggests increasing the government’s revenue as a solution, focusing efforts on direct taxation including higher personal tax levels for high earners and possibly higher corporate profit tax, as well as the reintroduction of tax on dividends. However these revenue items are functions of economic growth (or lack thereof). Moreover, three quarters of the central budget tax revenue comes from indirect taxes, VAT and excise taxes, which the major opposition party wishes to leave untouched. Progress in painful cuts and reforms in the social welfare and healthcare systems, as well as streamlining of public sector employment, may also be hindered.

The author works as chief analyst for Volksbank Slovensko.