Complaining about a lack of qualified labour might sound like a bad joke given the continuing high unemployment in almost all European countries, including Slovakia. But the reality is that businesses operating in Slovakia often experience difficulty finding people who have the right skills, both theoretical and practical, to fill their vacant positions. 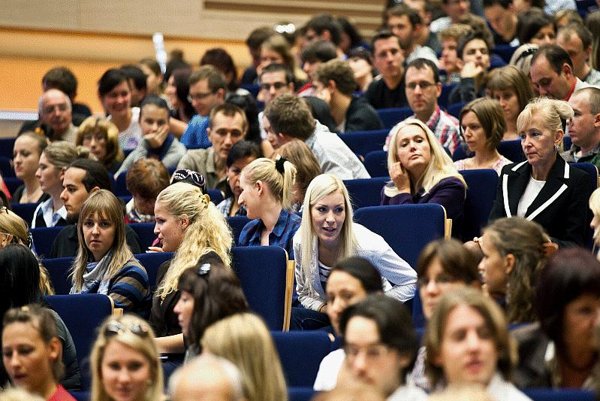 Tuning the education sector to respond to the needs of businesses remains a challenge. (Source: SITA)
Font size:A-|A+0

Complaining about a lack of qualified labour might sound like a bad joke given the continuing high unemployment in almost all European countries, including Slovakia. But the reality is that businesses operating in Slovakia often experience difficulty finding people who have the right skills, both theoretical and practical, to fill their vacant positions.

Skilled workers, be they university graduates or former students of vocational schools, have become a scarce commodity in some sectors of the Slovak economy. Foreign investors say that this lack of qualified labour, especially in industry, is an increasing problem in Slovakia, and the government also concedes that the structure of the country's labour force does not completely match the demand from companies who are creating jobs here.

Despite the ambitious immigration reform plans of the government of Iveta Radičová, which before its collapse in mid October 2011 had set out to introduce a more open policy designed to encourage newcomers to fill some vacancies, investors tend to the view that the country needs to focus on producing its own workers. Migration, they say, can only serve as an additional tool to supplement the needs of businesses operating in Slovakia.

“There are concerns among investors about the lack of a qualified labour force,” Jake Slegers, the head of the American Chamber of Commerce in Slovakia (AmCham), told The Slovak Spectator. He added, however, that there are many facets to this issue.

“There is a highly qualified labour force in Slovakia, but we also increasingly observe a disconnect between the available labour force and the market demands,” Slegers said.
German investors in Slovakia are also concerned about the availability of skilled labour, and the industrial sector seems to be most affected by this problem, according to Markus Halt, the spokesperson of the Slovak-German Chamber of Commerce (SNOPK).

“Production companies have been increasingly looking for skilled workers and engineers and do not rate their availability highly,” Halt said, noting, however, that this situation still is not as dramatic as it was before the outbreak of the economic crisis in 2008.

The concerns of some investors increased earlier this year as Germany and Austria prepared to open their markets to workers from Slovakia and other countries in central and eastern Europe that had joined the European Union in May 2004. At that time, Austria and Germany decided to impose the longest possible transition period – seven years – on these ‘new’ EU citizens before fully opening their labour markets.

The outflow of labour from Slovakia in search of opportunities abroad has continued to be a problem even during the recent economic crisis, and regardless of the increased accessibility of the German and Austrian labour markets, according to Slegers.

As it turned out, however, the opening of the German and Austrian labour markets in May 2011 had only a minor impact on Slovaks’ willingness to leave their homeland to pursue employment abroad.
Over recent months there has not been any significant outflow of skilled labour to these countries, according to Halt.

“The current problems on the labour market are home-grown,” Halt said.

Slegers listed several such home-grown problems, among them economic migration within the country, which is an issue that Slegers believes should be discussed more publicly.

Traditionally, Slovaks are not accustomed to changing their place of residence frequently – nor are they keen to do so – or to commute long distances to work. According to Slegers, AmCham is ready to contribute the expertise and experience of its member companies regarding economic migration, since it will have “some pending impact on Slovakia’s competitiveness and that is a really big issue”.
But aside from labour mobility, what foreign investors stress as being the major problem regarding the lack of qualified labour and associated problems in the education system, is the fact that “there is not much interest in vocational education”, as Slegers put it.

German investors also see the biggest challenge as lying in the field of vocational training, especially if the Slovak education system is to produce the labour force that businesses need, according to Halt.

“As education is a national objective the state should support such facilities,” Halt said. “Their integration into the educational system also needs to be flanked by acknowledgement of degrees.”

The lack of a strong link between theory and practice, which frequently forces employers to train people on the job, has been among the main faults of the Slovak educational system for years now, especially in the area of vocational training in industrial engineering, Halt said, adding that the government should not ignore the problem.

“In a survey among European investors in Slovakia the quality of education in universities and vocational schools was rated as one of the 10 worst location factors for Slovakia,” he explained.
Regarding university education, Slegers criticised the fact that the system of state payments to universities is for the most part based on the number of students attending the institutions.
“The fact that universities receive funding based on how many students they have makes quantity more important than quality,” he said. “We believe that this system of financial incentives should change.”

AmCham has also been pursuing more intensive business-academic cooperation, for instance by offering courses at the Center for North American Studies at the University of Economics in Bratislava, where business representatives offer a series of lectures to students.

“This allows the students to learn about practical issues and challenges that businesses have to
deal with,” Slegers said.

Additionally, in cooperation with Slovak universities, a special section has been prepared on the AmCham website featuring internships available at member companies. AmCham is now also offering its member companies the opportunity to cooperate with the Consulting and Development Center (PRC) at Comenius University's Faculty of Management.

“Through this new initiative, AmCham member companies can assist in the development of their future employees,” Slegers said.

To respond to the challenges in the education sector but also other areas, the Slovak government has come up with the Minerva 2.0 programme, bearing the motto ‘Slovakia to the first league’. It is not an entirely new programme: it was presented as long ago as the second government of Mikuláš Dzurinda (2002-2006). However, that government's premature end meant it never had the chance to carry out any significant reforms in the education sector as part of the programme.

The aim of the programme is to help Slovakia catch up with the more advanced European countries. It is overseen by the government’s plenipotentiary for a knowledge-based economy, working under the Finance Ministry, a post currently occupied by Martin Bruncko.

The point of Minerva 2.0 is to interlink the existing initiatives in various government departments that contribute to the development of a knowledge-based economy, under three main initiatives: education, science and research, and innovative entrepreneurship. Reform of how universities are managed is one of the main measures planned within Minerva 2.0. Most of the measures were supposed to be launched in the autumn of 2011, but after the fall of the government, it is not clear if or how the reform initiatives will continue.

Nonetheless, the government admits that the disconnect between teaching and practice is one of the
major problems facing Slovakia’s education system.

“The supply of existing professional training does not adequately match the current practical demands of the economy,” the supporting documentation for Minerva 2.0 reads.

According to those documents, the growth of a knowledge-based economy does not depend on high-tech innovation alone. It states that the spread of existing technologies and processes throughout the economy plays an equally important role.

Foreign investors are active in promoting measures which could help develop a knowledge-based economy in Slovakia. AmCham has, for instance, provided comments on Minerva 2.0 as well as on the Higher Education Act, Slegers noted.

“We support the involvement of external partners in the process of managing and teaching at the universities,” Slegers said. “Similar to the existing principle in the Vocational Education Act, we suggest that the state should motivate companies to take part in the university education system by recognising the associated costs as tax deductible.”

Halt of the Slovak-German Chamber of Commerce noted that his chamber has established a working group for labour market-related issues in which German companies can exchange their experiences, including those concerning educational matters.

The chamber also organises job fairs, the most recent of which were held at the universities of technology in Bratislava and Žilina. The chamber has also developed an online market for internships at German companies in Slovakia, “jobXchange”, Halt noted.

But for certain professions, such as varnishers or mould makers in the automotive industry, foreign investors “have switched completely to training on the job or seeking partnerships with vocational schools”, Halt said.