SLOVAKIA has finally adopted legislation that could begin to eliminate decades-old environmental burdens, with Environment Minister József Nagy calling it the “law of the decade” and representatives of the chemical industry and Slovakia’s Greenpeace environmental organisation calling the law a good compromise. Legislation to deal with hazardous sites that have been identified in about 30,000 locations in Slovakia has been kicking around in the government and parliament for nearly 20 years and finding consensus was not easy. 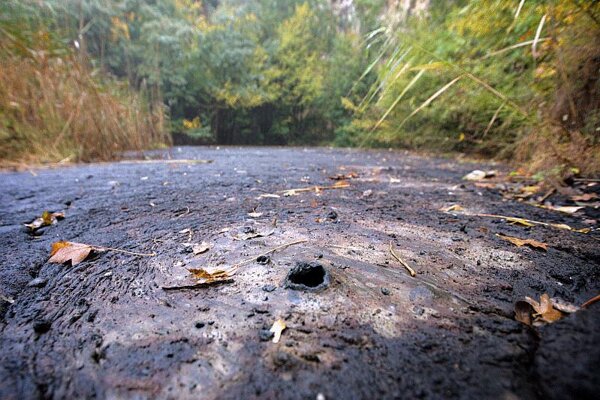 One of Slovakia's many polluted sites. (Source: SME)
Font size:A-|A+0

SLOVAKIA has finally adopted legislation that could begin to eliminate decades-old environmental burdens, with Environment Minister József Nagy calling it the “law of the decade” and representatives of the chemical industry and Slovakia’s Greenpeace environmental organisation calling the law a good compromise. Legislation to deal with hazardous sites that have been identified in about 30,000 locations in Slovakia has been kicking around in the government and parliament for nearly 20 years and finding consensus was not easy.

According to Rizman, the adoption of the environmental burdens law is a signal that Slovakia perceives deteriorating chemical storehouses, abandoned settling basins and contaminated properties of industrial companies that were left behind by the communist regime and the Slovakia’s period of wild privatisation, to be a serious problem.

“This law enables all of us – the state, the self-administration [i.e. regional and local governments], entrepreneurs as well as active citizens – to start solving the problem of environmental burdens in practice,” Rizman stated.

The Association of the Chemical and Pharmaceutical Industry of the Slovak Republic (ZCHFP), an association with member companies that have environmental burdens, views the law as an acceptable compromise that will enable gradual elimination of hazardous sites.

“ZCHFP especially appreciates that the state is willing to actively participate in their elimination and will take over responsibility for burdens where the originator cannot be identified,” Roman Karlubík, president of ZCHFP, told The Slovak Spectator.

Details of the law

Slovakia’s parliament adopted the law on October 21, President Ivan Gašparovič signed it on November 9, and it will take effect on January 1, 2012.

While Greenpeace stated that it can imagine a more strictly formulated law, ZCHFP pointed out that there will be significant financial costs in eliminating past environmental burdens and Karlubík regards a possible shortfall of funds in either the corporate sector or in the state budget as the most risky aspect of implementing the legislation.

“Current turbulences in European as well as world markets bring risks whose extent and impacts nobody can forecast today,” Karlubík stated. “Thus, the pace of elimination of old burdens will have to be subordinated to the ability of industry to remain competitive and keep its current labour force. The public has to be prepared that the whole process of removal of old burdens will be long and demanding from many sides. It is important that a legal framework now exists, which enables initiation of this demanding task.”

The number of locations across Slovakia with environmental burdens is estimated at about 30,000, and over 1,800 of those sites pose an immediate risk to human health and the environment. Karlubík said only a few percent of these sites are related to the chemical industry.

“Alas, these are the most extensive and most financially demanding burdens, such as dumping sites, settling basins, company premises, and so on,” Karlubík said. He told The Slovak Spectator that 57 companies with about 12,000 employees are members of ZCHFP and that the chemical industry in Slovakia is comprised of 186 companies with over 20,000 employees.

“Almost every bigger entity in the chemical sector has some relics of activities of their predecessors within their territory or vicinity, most often from the time of the communist regime, which can be classified as an environmental burden,” Karlubík stated.

Karlubík regards the €487 million that has been estimated as the total costs stemming from the legislation as a minimum sum and believes the final costs might differ significantly from this amount but noted that 84 percent of the costs will be covered from public sources and 16 percent will come from private companies. The new legislation also opens the opportunity to tap EU funds and the Environment Ministry expects these could amount to over €116 million. Karlubík also said Environment Minister Nagy had assured ZCHFP that his ministry is working on getting tens of billions of euros from the EU for remediation of environmental burdens in the countries of central and eastern Europe.

ZCHFP expects that dealing with these decades-old environmental burdens will be a long-term process.

“It took decades to create these burdens and we should be prepared for their elimination to take decades too,” said Karlubík, pointing out that chemical and pharmaceutical companies operating today are not primarily direct successors of the firms that created environmental hazards during the communist regime and only some of the successor companies specifically assumed the obligation to eliminate the hazards, for example during the privatisation process.

Greenpeace views adoption of the law as fulfilment of its main task and said that responsibility now resides with businesses and the state.

“I am very glad that after long years of words, discussions and negotiations the time for tangible acts has arrived,” Rizman stated. “The main task of Greenpeace is over – we identified a serious environmental problem, created civic pressure for its solution and we participated in a very constructive way in germination and adoption of the legislation, which can solve this problem in a systematic and comprehensive way."

Now it will depend on the state, regional and local governments, and entrepreneurs as to what stance they take, according to Rizman. Greenpeace will monitor implementation of the law and the actions of state bodies and the corporate sector in eliminating the burdens.

"If problems occur, we will certainly call attention to them,” warned Rizman.

ZCHFP said that each company which has not already done so must map out the existence and extent of environmental burdens on its property. Then the originator of the burden should be specifically identified and it should be determined if there is a successor responsible for remediation of the site. If not, then the state will become involved. A plan should be elaborated and approved for elimination of each burden, including a timetable and sources of funds. Karlubík believes finding funds will be the most demanding aspect, noting that past bureaucratic experiences in drawing EU funds do not offer much optimism.

Though the law seeks to remediate environmental burdens as quickly as possible while not damaging the viability of companies, it does not have any specific deadlines, Beatrice Hudáková, spokesperson for the Environment Ministry, told The Slovak Spectator.

The responsible persons must establish their own timetables based on their financial capabilities and these will then be approved by one of Slovakia’s regional environmental offices as part of a Plan of Works that assesses the timetable and its feasibility.

The Plan of Works must be prepared in accordance with the State Programme for Elimination of Environmental Burdens and the Water Plan of Slovakia. The law does set deadlines for submission of Plans of Works based on the risk level of an environmental burden within each location.