THERE is one thing all parliamentary parties gearing up for the election campaign can agree on: Slovakia needs an approved state budget for 2012. Avoiding a provisional budget next year is so appealing that even opposition Smer party has said it is inclined to support the draft budget tailored by the ruling coalition if some last-minute modifications are made. 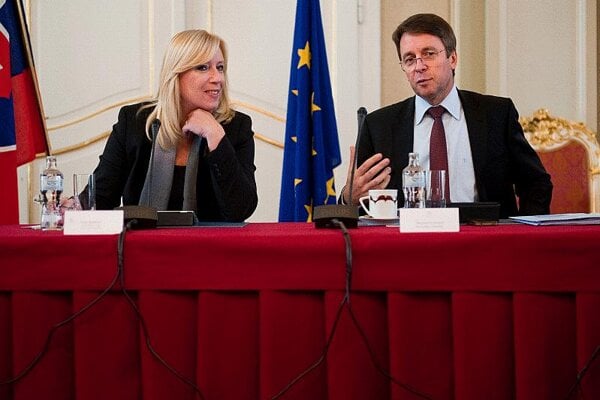 Iveta Radičová, pictured here with Ivan Mikloš, said further belt-tightening would not be at the expense of citizens. (Source: SITA)
Font size:A-|A+0

THERE is one thing all parliamentary parties gearing up for the election campaign can agree on: Slovakia needs an approved state budget for 2012. Avoiding a provisional budget next year is so appealing that even opposition Smer party has said it is inclined to support the draft budget tailored by the ruling coalition if some last-minute modifications are made.

Right now it appears that the four governing parties – the Slovak Democratic and Christian Union (SDKÚ), the Christian Democratic Movement (KDH), Most-Híd and Freedom and Solidarity (SaS) – will not need votes from Robert Fico’s Smer party, as all four parties have signed on to support the draft budget as well as reached agreement that next year’s deficit will have a target of 4.6 percent of gross domestic product (GDP).

“We view adoption of the budget as an important stabilising element for Slovakia’s credibility,” said Prime Minister Iveta Radičová on November 16, with Finance Minister Ivan Mikloš adding that the country needs to preserve its credibility in the eyes of creditors and financial markets.

The ruling coalition parties have also agreed they will refrain from approving any legislation that would widen the deficit, and signalled that any measures to further reduce the deficit will be advanced to parliament only if there is a clear agreement among the parties.

The finance minister will also have the right to veto any proposed legislation that could increase the budget deficit.

“Unanimous and unambiguous approval is the condition for any further savings measures,” Radičová stated, adding that this will serve a good basis for getting the proposed state budget through parliament.

In early November the Finance Ministry lowered its estimate of growth for the country’s GDP from 3.4 percent to 1.7 percent in 2012 due to turbulence in the financial markets and a disappointing economic outlook for countries in the eurozone. Based on the likely fall in economic growth, the government deficit for 2012 was predicted to jump to 4.6 percent of GDP rather than the 3.8 percent previously estimated.

Though Mikloš had tabled a package of proposals that he said could still trim next year’s deficit to 3.8 percent, Radičová said the government would not tighten its belt further at the expense of citizens. Nevertheless, the prime minister said she still remains optimistic about Slovakia’s ability to meet the 2013 deficit target of 3 percent of GDP, the country’s commitment under the EU’s Maastricht criteria.

The Freedom and Solidarity (SaS) party had been advocating further reductions in public expenditures so that the originally planned deficit target of 3.8 percent could still be achieved. But now Richard Sulík of SaS said his party would even give up its demand to terminate the requirement that those who are voluntarily unemployed pay their own health-insurance premiums. He said withdrawing this proposal would keep an additional €70 million in the state’s coffers.

Slovakia’s projected public finance deficit increased by €800 million for 2012 due to several changed assumptions in the budget: that €690 million in revenue will be lost due to reduced economic growth, that €70 million more will be required for health-care costs, along with €61 million more for local governments, and that €28 million will be needed to hold parliamentary elections next March, the TASR newswire reported.

Mikloš estimated that state revenues in 2012 could grow by €103 million due to other revenue sources, €47 million could come from EU funds, €7 million would be saved by freezing the salaries of public officials and €120 million could be received in dividends coming from Slovenský Plynárenský Priemysel (SPP), the 51-percent state-owned gas utility.

Slovakia’s political parties have also made adoption of a law capping the state deficit one of the conditions under which they will support the 2012 state budget. Radičová has said that the cap will also apply to municipalities and thus it will include all public administration. The law will establish an initial limit on public debt at 60 percent of GDP, with the limit being reduced by 1 percentage point each year beginning in 2018 until the debt cap is at 50 percent of GDP. If a future government hits the 60-percent debt ceiling it would automatically face a no-confidence vote in parliament.

MPs and ministers will also feel the budget squeeze as Radičová and Speaker of Parliament Pavol Hrušovský have agreed that their salaries and those of certain other senior public officials, except judges, should be frozen in 2012 at the level of their 2011 salaries. That proposal is awaiting action by parliament. Judges’ salaries will not be frozen as the Constitutional Court has previously ruled that doing so is unconstitutional.

Hrušovský and Radičová agreed that the salary freeze must be handled via a fast-tracked legislative procedure as Slovakia’s parliament will hold only one more session this year and it would be impossible to pass the law using normal procedures.

By law the salaries of MPs are based on the average salary in the national economy but under the previous government those salaries were frozen and continued to be based on 2007 wage levels. But earlier this year, based on a proposal from SaS, the current government agreed to unfreeze MPs’ salaries and linked future salary changes to the size of the deficit. Because this year’s deficit will be between 3 and 5 percent, MPs should receive 5 percent less. But because the 2010 deficit was higher and MPs’ salaries had been reduced by 15 percent last year, their salaries would have increased sharply in 2012 under the SaS-initiated legislation.

The agreement between Hrušovský and Radičová to seek a freeze in MPs’ salaries means that the methodology initiated by SaS may not be applied in 2012. But the government is not proposing to actually cancel that legislation and will leave that decision to the government that emerges after the March elections.

It appears that the idea of freezing MPs’ and public officials’ salaries is a popular step ahead of the early elections. Smer party has said it will support the fast-tracked legislation and one of its deputies, Peter Kažimír, stated that his party had already advocated such a move.

“We see this initiative on the part of the [governing parties] as them washing their hands of nonsense created by legislation that they voted for,” Kažimír told Slovak Radio.

On November 15 Fico called on the Radičová government to hold joint negotiations over the final details of the 2012 budget draft, saying that it is not acceptable to his party in its current form.

“The political price is that they [the government] will have to incorporate our views on the income side of the budget during the consolidation of public finances,” Fico stated, as quoted by TASR.