IN THE floodplain forests of the Danube River, a short distance from the Slovak-Hungarian border town of Komárno, a small NGO is attempting to harness traditional methods of working with nature to stabilise a disrupted ecosystem and combat climate change. BROZ, the Bratislava-based NGO behind the project, aims to restore animal grazing to the area and regenerate its indigenous population of willow trees. The NGO also hopes to bring employment, skills, and education to people in this deprived region, where unemployment reaches 16 percent. 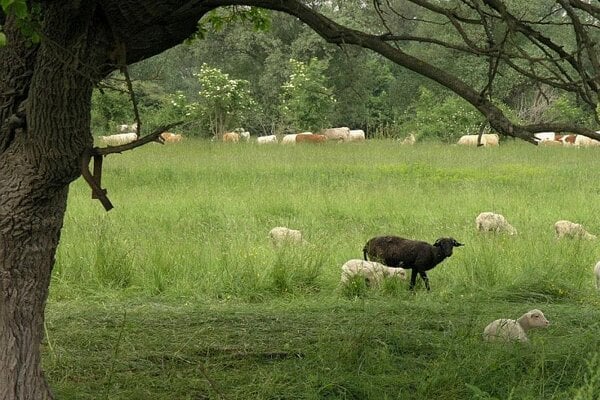 IN THE floodplain forests of the Danube River, a short distance from the Slovak-Hungarian border town of Komárno, a small NGO is attempting to harness traditional methods of working with nature to stabilise a disrupted ecosystem and combat climate change. BROZ, the Bratislava-based NGO behind the project, aims to restore animal grazing to the area and regenerate its indigenous population of willow trees. The NGO also hopes to bring employment, skills, and education to people in this deprived region, where unemployment reaches 16 percent.

“We are trying to encourage people to return to traditional methods of managing the land,” explained BROZ Director Tomáš Kušík. The project began in the summer of 2010, propelled by a $50,000 grant from the Global Environment Facility (GEF), the world’s largest funder of initiatives to improve the world’s environment. The grant came from the GEF’s Small Grants Programme (SGP) which seeks to empower local communities in achieving environmental aims.

As a result the sawn-off willow limbs stacked in Danube mud, and the cows, sheep and goats that graze the surrounding grassland now represent one of the 14,000 projects making up the SGP’s distinctive grassroots approach to tackling the deep environmental challenges facing the planet.

“The Soviet years involved a 50-year gap of neglect and indifference towards nature,” Kušík explained. “Previously these willow trees were carefully managed to produce firewood for the local community, but 50 years ago state policy introduced the use of fossil fuels for heating.”

This easy access to energy meant local people lost interest in traditional forest management, Kušík continued, so “the trees have had 10 to 50 years without management. Once a willow tree is cut it can die if it is not managed further. Animal grazing stopped fifty years ago, and so did much of the land management, so it has become very overgrown”.

This neglect and loss of traditional knowledge has caused a number of problems, outlined by Kušík in his presentation to the SGP representatives. On a global level, the increased use of fossil fuels is part of the pattern of industrialisation that has almost certainly caused climate change. On a local level, the willows’ disintegration allowed for both the growth of invasive species and the onset of sparse forest. Invasive species altered the area’s eco-system, reducing bio-diversity and threatening other species that depended on the willow tree. Sparse forests
reduced CO2 sequestration since trees remove CO2 from the atmosphere during photosynthesis.

Effective forest management, bringing together the knowledge of BROZ with the labour of local people, is once again yielding firewood from the willow trees. This firewood, a form of biomass, can be used as fuel by the local community.

“The nearest village has no gas and elsewhere in the region gas is getting very expensive,” Kušík commented. He added that the wood offers a carbon neutral source of fuel, because although burning wood emits carbon it is no more than what was taken out of the atmosphere by the growth of the tree.

“For the production of the biomass we try to include locals,” Kušík said, explaining that this generates employment for local people. Three people were employed over the last year, the first year of the project’s operation, and it is hoped that as capabilities expand more jobs will be created. BROZ provides in-situ forest management training in planting trees, cutting timber (both willow trees and invasive species) and cleaning up the branches.

BROZ also plans to make the project self-financing by selling the firewood that is produced and “the plan is for people to buy the biomass – local schools, households,” said Kušík. “So from off-cuts with no further use we can make something which produces a sustainable income.”

In order to render the wood saleable to the local community, however, BROZ needed to convert the unwieldy willow branches into easily-burnt pellets. A pellet-making machine costs at least €30,000 and its purchase was the primary reason the project needed the $50,000 grant.

Even with the pellet-making machine paid for, some of the SGP representatives were sceptical that the project would be able to achieve self-sufficiency, pointing to the intensity of labour needed to effectively manage the forest. An impassioned discussion ensued, with environmentalists from as far apart as Italy and Iran debating the importance of the project being able to eventually generate enough income to sustain itself.

Delfin Ganapin, a SGP Global Manager in charge of 8,000 projects within the programme, argued that this economic goal did not define the project’s success.

The grant enabling the project was awarded in August 2010 by the Small Grants Programme established by the GEF in 1992, which has so far provided over $500 million in grants to communities in 122 developing countries. The SGP began operating in Slovakia in 2009 and since then has provided $980,000 to initiatives around the country. BROZ’s forest management project – titled ‘Traditional forestry-recovery of employment and CO2 fixation’ – is one of 23 such projects currently running in Slovakia.

The national coordinator of SGP in Slovakia, Angela Čimborová, was one of the representatives – mostly SGP national coordinators of whom there is one in each participating country – who took part in the field trip to BROZ’s project site. The field trip was part of a five-day Regional Workshop for National Coordinators of the Small Grants Programme, organised to launch the implementation of GEF/SGP’s fifth operational phase in Europe and the Middle East.

“This is one of my favourite projects,” Čimborová commented, as she squelched through sodden willow leaves, “because it involves cutting across boundaries: protecting biodiversity, bringing employment to a deprived area, and decreasing carbon emissions. I think projects work best when they bring together several different objectives like this”.

Čimborová emphasised that while GEF and SGP are primarily concerned with the environment, socio-economic goals inevitably figure too.

“Over the years GEF found that you cannot preserve the environment without bringing economic benefits to the local population,” she said. “So the projects I most like are those that find a way of combining environmental benefit with helping the disadvantaged, who in Slovakia are often the long-term unemployed and Roma communities.”

“The main aim is the environment, but we also aim to improve the socio-economic situation of the people. This makes it more sustainable. Poorer people often feel the environment is not important, is a luxury – especially as it was rich people who destroyed the environment in the first place,” Saghier said.

While the GEF also operates full-size programmes involving individual grants of over $1 million, the SGP aims to meet the same global environmental goals by working at a grassroots level. Danielus Pivoriunas, senior operations officer with the SGP, argues that the programme’s success – its funding has increased fivefold since its establishment in 1992 – owes much to this approach.

“Working at a local level allows us to draw on the enormous creativity of people,” he stated. “The projects are owned fully by the people on the ground, there is not someone telling them what to do – they have full control. This guarantees that the NGOs implementing the projects are committed and passionate, that they will work towards their project’s success. We give local communities full ownership of results.”

And it is not only the project implementation that is delegated to such a grassroots level, Pivoriunas explained, but decisions on how to distribute funding are done in that way as well. National steering committees, of which there is one in each country, decide which projects will be given support. These committees are mainly constituted by local NGOs.

Delfin Ganapin also argued that the focus on empowering local organisations is central to the SGP’s success. He suggested that this strategy helps to channel broader benefits into the often-deprived communities in which the projects are rooted.

“We have seen the transformation of communities through these projects,” Ganapin stated. “At first, they are often indifferent, disorganised. But after a few years of the projects’ implementation they can be committed and organised.”

Ganapin elucidated this point by describing the SGP’s work in Mexico. In the protected area of Yum Balam, on Mexico’s south-east coast, SGP projects have worked with indigenous Mayan communities towards a typically broad range of aims. Local risk management strategies have been implemented to increase resilience to climate change and enhance the conservation of the area’s flora and fauna; carbon emissions have been reduced by teaching locals how to prevent forest fires after hurricanes. Previously, Ganapin explained, these communities had little understanding of how to get their voices and needs listened to in mainstream Mexican politics. But meeting the SGP projects’ objectives brought the communities into contact with larger political institutions, empowering them to solve other problems in the future.

“The projects expose and connect civil society and volunteer NGOs to governments,” Ganapin concluded. “It tries to get governments to recognise that communities and civil society are excellent partners in sustainable development work – and vice versa.”

These principles are embodied in the support that SGP has given to BROZ. By May 2011 the NGO’s project had saved 802 tonnes of CO2 emissions and harvested 537 cubic metres of firewood: a small contribution to the wellbeing of the global environment, joining those of SGP’s 14,000 other projects worldwide.