IN A LARGE Bratislava supermarket, two of the seven cashiers on duty are young women with university degrees, as customers can see from the academic titles on their nametags. It is not that one needs a university degree in economics to be a cashier in Slovakia but rather that the two graduates have not been able to find jobs that better match their qualifications. While working as a cashier in a supermarket may be a better option than the unemployment office, human resources professionals say it is often a lack of practical experience that makes it difficult for new university graduates to find suitable jobs and that employers are often quite hesitant about hiring people who have just graduated. 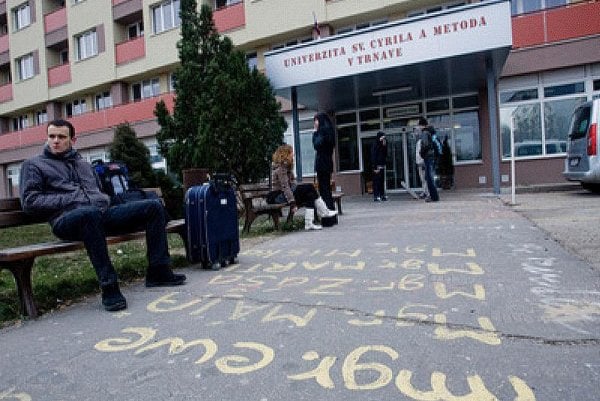 Having a university education is not always enough to find a good job. (Source: SME)
Font size:A-|A+0

IN A LARGE Bratislava supermarket, two of the seven cashiers on duty are young women with university degrees, as customers can see from the academic titles on their nametags. It is not that one needs a university degree in economics to be a cashier in Slovakia but rather that the two graduates have not been able to find jobs that better match their qualifications. While working as a cashier in a supermarket may be a better option than the unemployment office, human resources professionals say it is often a lack of practical experience that makes it difficult for new university graduates to find suitable jobs and that employers are often quite hesitant about hiring people who have just graduated.

“The biggest problem with graduates in general is their lack of practical experience, lack of working habits, personal immaturity and, at least in the past, exaggerated salary expectations,” Lucia Burianová of the Profesia job portal told The Slovak Spectator, adding that employers often prefer people with some on-the-job experience when looking to add to their staff.

If employers do not hire the available number of university graduates, then some of those individuals with higher education are likely to take jobs that require only the skills of a secondary school education.

František Palko, the director of the Economic Policy Institute, told the TASR newswire that the quality and amount of university education is not in harmony with the needs of the labour market and long-term communication between educational institutions and employers has not existed in Slovakia.

Human resources professionals have noted that employers no longer look strictly at graduates’ diplomas when filling certain positions, other than for those occupations that are highly technical or are in the medical field. A recurrent complaint among employers is that students do not receive a sufficient amount of practical training in school and they are not able to function efficiently in their first jobs. And university students studying economics also say they are not satisfied with the amount of practical training they receive from their schools.

“I expected the school to provide me with practical training from the very first year,” Michaela Pisarčíková, a third-year student at the Faculty of Economics at Matej Bel University in Banská Bystrica, told The Slovak Spectator.

Andrej Zreľak, a third-year student at the Faculty of Economics of the Technical University of Košice, had similar comments and added that his school provides little practical training and students must seek out such opportunities on their own.

Jana Sigotská, a fourth-year student of the University of Economics in Bratislava (UEB), noted that the only practical knowledge she has acquired came from courses in accounting basics, and added that her school has scaled back this aspect of its curricula.

One student at UEB had a clear idea of how she could receive more practical knowledge and skills.

“The school should have contracts with some firms where we could go during the term and gain some practical knowledge,” Adela Straková, a fourth-year UEB student, told The Slovak Spectator.

The University of Economics in Bratislava does have a Career Centre and its representative, Lucia Gunišová, told The Slovak Spectator that the centre mediates internships, work positions, short-term jobs and other types of opportunities in which students can gain some real work experience during their studies on a voluntary basis and that interest has been gradually rising among students.

“The number of students starting to use our services is rising and they are starting to come as well in person,” Gunišová stated.

The centre communicates with students through the internet, social networks and the student magazine, as well as through face-to-face contact.

This year the Career Centre organised its first job fair, called “Career Path”, where students had an opportunity to meet face-to-face with potential employers, distribute their resumés and get advice from experts.

Andrea Záhradníková, a fourth-year student at UEB, said she learned about the Career Centre from leaflets at the university and added that students would benefit more if the centre offered a wider range of opportunities.

Some employers are trying to reach out to students by offering internship opportunities that can help develop their practical knowledge.

Many businesses have also commented that they know they are not likely to receive fully-trained employees graduating from schools and now expect to have to do some of the training of new hires.

Henkel, a firm which frequently hires university economics graduates, does not consider recent graduates sufficiently ready for the jobs they seek.

“But we are prepared for that,” Martin Resutík, human resources manager for Henkel, told The Slovak Spectator. “We train our new employees without any complications.”

Resutík added that hiring new graduates also has its advantages.

“They do not have bad working habits, they are used to learning a lot at once, and they do it quickly,” Resutík stated, adding that the greatest disadvantage is the long period it takes for the firm to see a return on the investment it makes in training new university graduates.

Another major employer for graduates from economics faculties is KPMG, the global auditing and consultancy firm, which has been ranked second for the past two years in the “The World’s Most Attractive Employers” survey prepared by Universum, a consultancy involved in employer branding.

“Because we hire a large number of graduates each year they represent approximately 15 percent of our total number of employees,” Valéria Hanzelová, HR associate for KPMG in Slovakia, told The Slovak Spectator.

Hanzelová added, however, that KPMG must train all its new employees because they have minimal practical skills.

She also noted that KPMG offers a variety of workshops and lectures for students and recruits some of them into its audit department each year so that they can acquire practical skills.