THE CURRENT Iveta Radičová government might be an interim arrangement, but that does not mean it is immune to high-level changes. Seventeen months after Radičová and her ministers took office, and just over a month after they lost the confidence of parliament in a joint vote on the EU bailout mechanism, Ľubomír Galko, the defence minister, has become the first cabinet-level casualty. 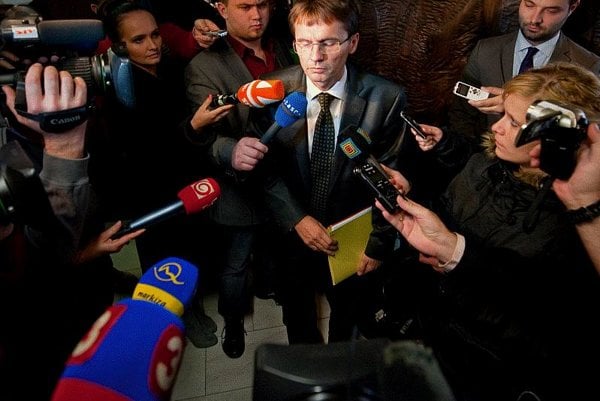 THE CURRENT Iveta Radičová government might be an interim arrangement, but that does not mean it is immune to high-level changes. Seventeen months after Radičová and her ministers took office, and just over a month after they lost the confidence of parliament in a joint vote on the EU bailout mechanism, Ľubomír Galko, the defence minister, has become the first cabinet-level casualty.

Galko did not have a smooth start in his ministerial position. With a background in retail management, he was seen by many as an inappropriate candidate to head the Defence Ministry. His critics went as far as to attack his poor English-language skills. Prime Minister Iveta Radičová said in July 2010, when her cabinet was sworn in, that she expected Galko to submit a certificate proving his proficiency in English by mid-October.

Over time, however, he has become one of the most visible members of the cabinet, particularly due to his constant attempts to uncover dubious tenders and deals agreed by the ministry under his predecessor, Smer nominee Jaroslav Baška.

When observers of the Slovak political scene evaluated the first year of Iveta Radičová’s cabinet in power, Galko was firmly among those ministers whose work attracted praise. Galko revealed cases such as disadvantageous contracts for the modernisation of military helicopters and for purchase of overpriced IT services.

Radičová admitted she was sorry that Galko had to go.

But the intelligence services of the Defence Ministry failed and the minister bears full responsibility for that, she said in explanation of her decision to dismiss Galko.

The reports about the wiretapping of Pravda daily journalists and the director of the TA3 news channel, Michal Gučík, which led directly to Galko’s departure, were not the first to deal with his oversight of the military intelligence services.

In August 2010 Galko appointed Milan Hudec as chief of the Military Intelligence Service (VSS), but removed him from his post within days, after suspicions emerged that some documents concerning his clearance certificate had been falsified. After only one month in office Galko was requested to attend a session of the parliamentary committee in charge of supervising the military intelligence services. At the session he voiced “a very serious suspicion that somebody has misused the VSS”.

“I’ll insist that [Smer chairman Robert] Fico explains where he got hold of the information that he has provided to the media,” Galko said. Fico strongly criticised Galko for denting Slovakia’s credibility as a NATO member-state by putting at the helm of VSS a person who did not hold a reliable security clearance. Extrapolating from the information obtained, Fico stated that Hudec had learned about the VSS’ organisational structure after being appointed to the post without proper authorisation.

That was also when Galko first mentioned he might have fallen victim to “intelligence games”.

“I’ve got a suspicion that some members of the intelligence services attack the defence minister in order to prevent him from publicising things that were happening here during the previous government,” he said, as quoted by the Sme daily.

Ľubomír Galko was born on February 14, 1968, in Klieština, near Považská Bystrica. He studied at the Faculty of Mathematics and Physics of Comenius University and in 1991 began working as a computer programmer. Between 1993 and 2001 Galko was in the software applications business. From 2001 until he took up his ministerial post he worked in senior managerial positions at various retail companies. Galko was a founding member of the Freedom and Solidarity (SaS) party. He is a deputy chairman of the party and a head of its committee for regions.