LAST year Bratislava’s Month of Photography festival celebrated its 20th anniversary and the event returned again this November, albeit in a slightly smaller format. The economic situation has restricted public resources flowing to the festival and companies in the photographic field as well as other firms have been less generous in supporting the event, leading to fewer exhibitions than in past years. Last year the festival sported almost 50 exhibitions but this year the festival organisers staged only 28 in order to preserve the quality of those offered. 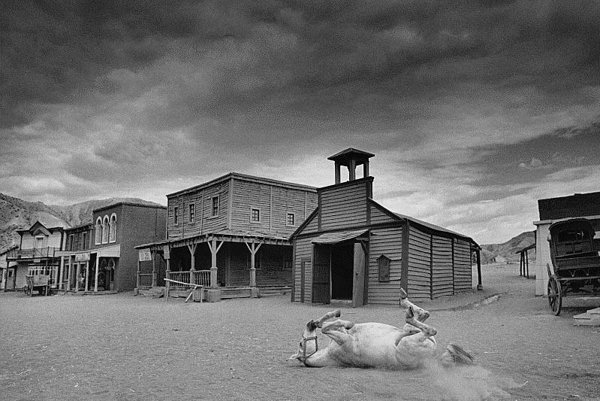 LAST year Bratislava’s Month of Photography festival celebrated its 20th anniversary and the event returned again this November, albeit in a slightly smaller format. The economic situation has restricted public resources flowing to the festival and companies in the photographic field as well as other firms have been less generous in supporting the event, leading to fewer exhibitions than in past years. Last year the festival sported almost 50 exhibitions but this year the festival organisers staged only 28 in order to preserve the quality of those offered.

“I cannot do the festival without money,” said Václav Macek, the director of the Central European House of Photography (SEDF) in Bratislava, when introducing this year’s programme in early November. “Each exhibition held within the Month of Photography costs money. It is necessary to pay for printing of photos, framing, insurance, and so on. Exhibitions brought from abroad to Slovakia cost between €3,000 and €14,000. Somebody always has to pay for this.”

Macek said the festival’s deteriorating financial situation began when it lost its general partner, Fujifilm, after the company replaced its national branch offices with only two promotional centres across Europe. Overall support for the festival from the corporate sector has fallen by half and the festival organisers have not been able to cover the gap with other resources.

Financial assistance from state and municipal sources has seen a similar drop, Macek added. The festival did receive €28,000 from the Ministry of Culture this year, but this was 40 percent less than in previous years. He added that the Bratislava city government has not been very supportive even though local residents as well as foreign visitors are accustomed to attending the festival and await its start each year. The festival has managed to inspire other cultural institutions to hold photographic events: the Bratislava Municipal Museum is holding two photo exhibitions in November; and the Off Festival, an offering of contemporary photography, is also running this month.

Macek said he is most concerned that state and municipal government offices have not developed proper financial support schemes for photography, theatre and music as well as other forms of culture, except perhaps for film.

Nevertheless, the festival has maintained its ambition to present the world’s top photography in Slovakia and also to get Slovak photography seen within Europe and other parts of the world.

“We managed this last year when we exhibited works by British photographer Martin Parr,” said Macek. “When we showed him our library of books dedicated to photography at SEDF, he came across a book by Karol Kállay, Deň plný zázrakov (Day Full of Wonders) and Parr chose it as one of the best one hundred photographic books of the 20th century, one of his projects.”

As in past years, the festival offered lectures by prominent photographers such as Christopher Steele-Perkins, a UK photographer and member of the Magnum Photos agency, who also taught a two-day workshop, and Czech photographers Jan Saudek and Viktor Kolář, as well as a popular portfolio review and a conference about teaching photography.

The festival’s exhibitions this year are presented roughly in three themes: the first is dedicated to Slovak photography; the second to schools of photography; and the third to Portuguese photography.

The most prominent Slovak exhibition is probably the one called New Slovakia, a 2011 flagship project by the Slovak National Gallery that presents the birth of modern Slovakia between 1918 and 1949. The Bratislava of Mine exhibition showcases photos taken by world-famous Slovak photographer Karol Kállay between 1944 and 1964. Jaroslav Žiak, another Slovak photographer, is also featured.

The Youthful Medium exhibition presents works by students from the Department of Photography and New Media at the Academy of Fine Arts in Bratislava marking its 20th anniversary. SEDF also brought presentations from photography schools in the Czech Republic, Poland, Hungary and Finland.

Macek highlighted a retrospective exhibition by Viktor Kolář, described as an ‘urban photographer’ in the festival catalogue, who has dedicated most of his photographic life to his home town of Ostrava in the Czech Republic as well as “to exposing ‘communist progress’ that brought devastation to the natural environment and to the human soul”.

An inseparable part of the Month of Photography is bringing to Bratislava the winning photographs from World Press Photo (WPP), considered photojournalism’s most prestigious competition, and the tradition continued this year with an exhibition that ran until November 22, giving visual insights into the many events that shook the world last year such as earthquakes, volcanic eruptions, and military and political conflicts. The exhibition included the World Press Photo of the Year, a portrait of an eighteen-year-old Afghan woman, Bibi Aisha, taken by South African photographer Jodi Bieber. Bibi Aisha’s face was brutally disfigured as retribution after she fled her home because of violent treatment at the hands of her in-laws.

“Jodi Bieber’s evocative portrait of Bibi Aisha is that combination of horrific and beautiful,” states the text that introduces the photograph. “The power of the picture lies in the dignity of its subject and in the thoughtful treatment by the photographer.”

This year’s edition of WPP also presented some new directions in photojournalism by including two series of photographs that received a special mention and an honourable mention for citizen journalism and use of new technologies.

The WPP jury gave special mention to a 12-picture series of photographs made by the Chilean miners trapped 700-metres underground for 69 days that feature Edison Pena, a keen marathon runner who kept up his exercise routine while waiting for his eventual rescue.

Photographer Michael Wolf was given an honourable mention in the category of Contemporary Issues for his “A Series of Unfortunate Events” which were all photographed using Google Street View with a camera placed on a tripod in front of a computer screen in Paris. Google Street View displays online panoramic views of different locales around the world taken by a fleet of specially adapted cars, which have raised privacy concerns among some people.

“This is a sort of combination of man and Google Street View,” Tessa Hetharia from the World Press Photo Foundation told The Slovak Spectator, adding that Wolf’s series has raised much discussion among people. “It is something new and 50 years ago these images wouldn’t have been taken.”


For more information about the festival, visit www.sedf.sk