Percussion as a globalising power

What do an Iranian student of classical music, a Polish graduate of geo-information studies, an Indian classical percussionist, a US percussionist and percussion-maker, a Czech band and Slovak musicians have in common? The answer is a love of percussion – as well as their participation in the first Slovak festival of drums. Taking place on October 28 and 29, World of Drums combined different musical styles, and artists of various nationalities, ages, and sometimes even professions. 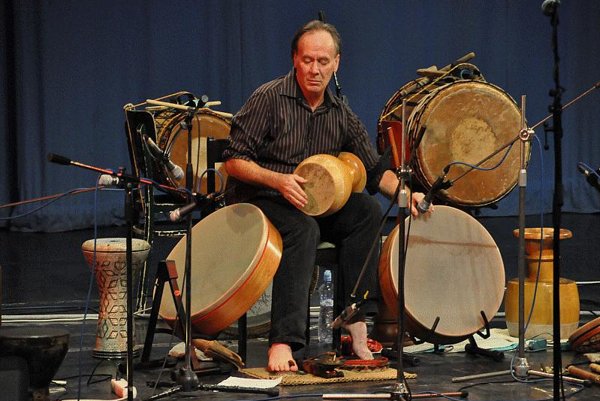 What do an Iranian student of classical music, a Polish graduate of geo-information studies, an Indian classical percussionist, a US percussionist and percussion-maker, a Czech band and Slovak musicians have in common? The answer is a love of percussion – as well as their participation in the first Slovak festival of drums. Taking place on October 28 and 29, World of Drums combined different musical styles, and artists of various nationalities, ages, and sometimes even professions.

“We met via Facebook, through our profiles – and thank God that Facebook exists,” Patrycja Napierala, a Polish multi-instrumentalist, said about her unusual meeting with Amirkasra Zandian, an Iranian musician now living in Vienna. In fact, they have not met very often while rehearsing for their joint performance and most of their musical practice is done through social networks too. Amirkasra has a musical background and received education and training mostly from his uncle; while Patrycja, although starting to learn music at the relatively early age of 12, picked up most of what she knows about percussion and drumming via the internet. Together, they opened the festival’s first evening programme and Amirkasra also led the first workshop of the festival, that of Central Asian rhythms and the doumbek, or goblet drum. The evening continued with Eddy Portella and his jazz-Latino El Poderoso 5tet band, Roman Kozák and Zuzana Došeková-Cenkerová and their Celtic melodies, and culminated with Abhijit Banerjee, a musician playing classical Indian music, who joined forces with Slovak violinist Barborka Botošová and later improvised with Slovak violinist Stanislav Palúch and Moldovan cymbalo player Marcel Komandant.

On Saturday, the festival continued with workshops, a drum circle with Tono Guth and Rytmika, and then the stage was handed to a US percussionist who now has been living in the Czech Republic for several years, Hearn Gadbois, who invited his students to support him under the name “Learned Hands”. His music has its roots in Middle Eastern rhythms but recently he has started to break loose from their stricter rules and make his own compositions and improvisations. African rhythms are a part of any drum festival, and a band from the Czech city of Brno, Tubabu, cheered audiences and made them dance with traditional rhythms from West Africa. Edy Portella then led the orchestra Batatimba which, uniquely in Slovakia, consists of a dozen locals playing Latin-American percussion instruments to create a sort of Samba-drome, or maybe Samba-drums, in the Petržalka house of culture that acted as the venue for the festival. Both evenings were rounded off by an ethno-disco with DJ Mooshak.

When asked how they came to play the rhythms they play, the musicians had varying answers. For some of them, the route was as natural as can be – they had grown up in the tradition and embraced it ever since. For some, especially those who had crossed borders – or built bridges – between traditions, the way was less linear and simple. Some, like Napierala, found inspiration on the internet.

Gadbois, meanwhile, said his focus had shifted. “I am not inclined to play traditional music any more. Once I used to travel a lot, to learn from local musicians. It is a great way to learn how to play an instrument, but I am not the right kind of person to play Persian or Arabian rhythms. If you want to find an authentic voice, you have to listen to yourself, to listen to what you are hearing. So now I rather tend to travel inside – and it’s less tiring,” he said. “Everybody probably arrives at a point when you are allowed to follow what you love. When I started, I had to go round people and immerse myself into their culture and study it. But today, you can also learn by going to Youtube, and become an instant master. I don’t want to judge it, although I think that a lot is missing [compared to] the live experience; but I also think the first way is more direct. My approach to music has become more and more like: ‘Use whatever you like’,” Gadbois concluded.

The festival is something new on the domestic scene: it occupied two days and included workshops, a small shop and bazaar in the entrance hall, shows of Oriental dance, a disco and every different kind of percussion instrument and drum, from a jazz-like xylophone through a “beat-box” (where a human voice is the only instrument), to ethnic and folklore percussion instruments. A similar project emerged from the Czech Republic some years ago called Zlet bubeníkov (Gathering of Drummers) but it attempted to bring several musicians of different styles together onstage at one time, rather than offering an exhaustive tasting and brief overview of different styles of music. After the Petržalka event finished, the hope remains that it was not just a one-off, but will become a fresh and interesting tradition.