THE 13th INTERNATIONAL Film Festival Bratislava took place between November 4 and 9 in seven movie theatres in the Slovak capital, including new venues in the Eurovea shopping centre and in Lumiere, the recently reopened cinema formerly known as Charlie Centrum. 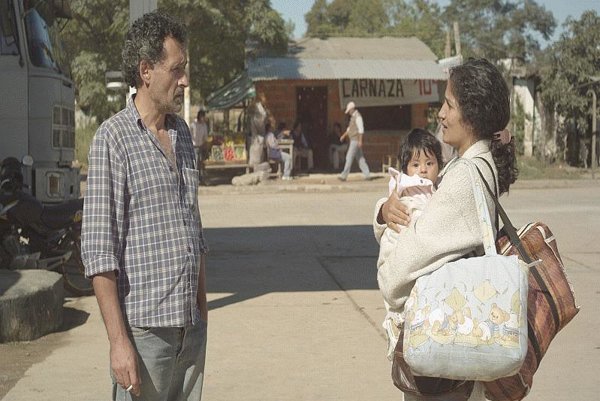 A scene from Acacias, the winner of the Grand Prix at the International Film Festival Bratislava. (Source: Courtesy ofMFF)
Font size:A-|A+0

THE 13th INTERNATIONAL Film Festival Bratislava took place between November 4 and 9 in seven movie theatres in the Slovak capital, including new venues in the Eurovea shopping centre and in Lumiere, the recently reopened cinema formerly known as Charlie Centrum.

“Since the festival moved from the Istropolis centre to Polus, then to Aupark and finally here, it has always been a change for better. I think Eurovea is the best place ever, with the Danube embankment and all,” Radovan Holub, the festival’s programme manager, told The Slovak Spectator. Holub is a Czech film reviewer and publicist who has helped organise the festival for many years; he managed this year’s Antidepressants and Stories sections. “But still, in a way I still look back to the times in Istropolis, when we as organisers first found out that people would queue for a totally unknown film – and fill the big hall – and that a small film could attract a relatively huge audience,” Holub reminisced.

When asked by The Slovak Spectator how he chose the films for these two sections, he continued: “The section Antidepressants has been maturing in me for several years. I saw that not only European, but global cinematography has been heading for a terrible depression – 80 or 90 percent of films are about refugees, people without a future, prostitutes who are beaten, etc. For me, there is also another world apart from these characters, who are a kind of virtual reality of film; a world where people can still laugh, understand each other and where things still work.” He continued to say that apart from one Austrian situation comedy, he did not want to choose just comedies for Antidepressants, but rather works combining both fun and deeper insights. “In my opinion, a good movie should not only address some issue or delve into psychology but also entertain. Thus this section.”

Festivals are not for critics

Even the art films from the Stories section should have some kind of added value, a story or some aspect that will intrigue the viewer emotionally, Holub explained. “Ultimately, who is this festival meant for? This is not a movie festival for 3,000 critics and reviewers like the one in Cannes: if there are 3,000 critics in one place, they can make such a fuss about one single movie that this can help it break through. But here, in Slovakia, it does not work in this way. Generally, festivals in smaller European countries need to be for audiences.” He explained that the trick when picking movies was to show different environments from where the picture plays, different characters and also films with different structures.

Apart from Holub, other programme managers who selected films were Nenad Dukic from Serbia, the festival’s main programme adviser; Slovak Pavel Smejkal; and Dutch film historian Erwin Houtenbrink. In total, about 21,000 people in Bratislava saw 140 feature, medium-length and short films at the festival and accompanying events. After its stint in Bratislava, the festival continued to Banská Bystrica and Brusno spa. From the films that competed, the Grand Prix went to the minimalist Argentinean road-movie Acacias by Pablo Giorgelli; it also received the FIPRESCI (International Federation of Film Critics) award. Among the documentaries, the Mexican-US movie Night Watchman won, while the Italian short movie Sundays was chosen as best in that category. The festival premiered four Slovak films: the animation Dust and Glitter; two horror stories, Interview and Monsterprocess; and a documentary about theatre personality, ...and me, Katarína Kolníková.

Most of the Slovak films were screened in the Made in Slovakia section, which also included the documentary Lunik IX by British director Michelle Coomber. Coomber flew to Slovakia to present her work in person and explained how she got the idea of making a documentary about a nursery school in the infamous housing project, which has become a symbol of the ghettoisation of Roma people in eastern Slovakia’s largest city. “I made a documentary in 2007 with Canadian producer Dana Wilson and when she was doing research, she was taken to that school. When she described it to me, I realised what an extraordinary place it was,” Coomber explained. “I used the method of observation. The whole work took three years, and it was not easy to get the trust of locals, but we had great help from teachers at the school, teaching assistants, especially one Roma assistant who was actually our vector into the families. We got accepted by the community when they understood that we were going to stay for longer.”

“When we conceived the film, I wanted to make it totally from the children's point of view, which was demanding due to the crew. What I wanted to do – and sometimes I felt I succeeded – is to give the evocation of childhood. It was hard to follow specific children in the shooting of the documentary, as many of them moved out, stopped going to school, or their families stopped cooperating with us. But I wanted to treat this nursery school as if it was a little universe. I think that after some time I realised how tough it really was for these children to attend, to learn, but how good it was for them too, showing them a different world to what they were used to. That was where I started from: I tried to make a film about childhood, rather than a Roma issue story,” Coomber said.

How far should creative licence go?

British director Daniel Whitney and cameraman Russel Nabb also attended the festival to introduce their movie Kandahar Break, a romantic story set among the dangerous minefields of Afghanistan in the late 1990s and early 2000s. When they described how difficult it was to make the film – although filming began in Pakistan and moved, after part of the crew was ambushed and shot, luckily with no fatalities, to Tunisia – they became involved in an exchange with a filmmaker of Afghan origin living in Slovakia, Sahra Karimi, who criticised their work for not being true to life. The debate evolved around to what extent creative licence can be used and how realistic a film about a foreign culture should be in order to be credible or plausible.

Such debates with authors, critics, film professionals, programme advisers and jury members helped to make the festival interesting and memorable for audiences, aside from the films. Most of the movies shown will not receive general distribution.