THE PRICE of a ski pass on November 25: free. This announcement welcomed wintersports enthusiasts at one ski resort in northern Slovakia on the first day of the ski season. Registration plates in the car park showed that the offer had attracted skiers from around Slovakia. Half a metre of manmade snow and sunny weather also helped, filling winter resorts across Slovakia with the hope that the upcoming winter season will be a successful one. 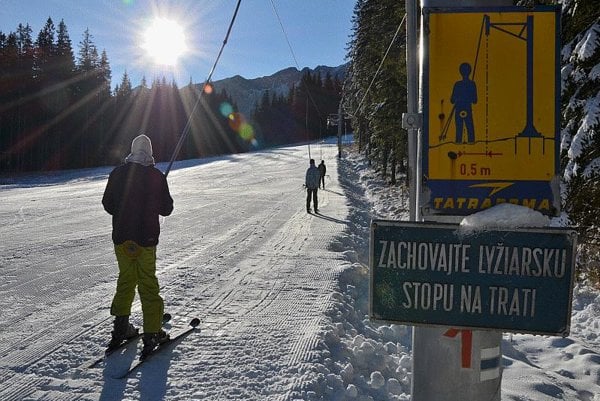 THE PRICE of a ski pass on November 25: free. This announcement welcomed wintersports enthusiasts at one ski resort in northern Slovakia on the first day of the ski season. Registration plates in the car park showed that the offer had attracted skiers from around Slovakia. Half a metre of manmade snow and sunny weather also helped, filling winter resorts across Slovakia with the hope that the upcoming winter season will be a successful one.

Even though there is currently very little natural snow on the ground in Slovakia, several resorts have already launched their ski seasons. During the last weekend in November the seasons began in Donovaly in the Low Tatras, in Roháče-Spálená in northern Slovakia, while ski lifts in Jasná in the Low Tatras, and in Tatranská Lomnica and Štrbské Pleso in the High Tatras should be turned on during the first weekend in December. But everything depends on the weather and whether it will allow production of manmade snow, as there is currently a lack of precipitation across Slovakia. Nonetheless, hopes are high at hotels and ski resorts of a strong start to the season.

“We have expectations for a good winter season,” Peter Chudý, the director of the High Tatras Tourism Association, told The Slovak Spectator, citing media reports of a positive outlook for the upcoming season. “We think that hoteliers are putting their hopes on orders for winter stays in their facilities as well as on information in the media about further investments in the ski industry in Slovakia.”

According to Chudý, the last winter season was about 10 percent better in terms of the number of visitors accommodated compared to the year before, but the growth in the number of people transported by cable cars and lifts was several times higher.

“I expect that a similar increase in the number of accommodated as well as one-day visitors might also be repeated this winter,” Chudý said, adding that the number of accommodated visitors from Ukraine and the Russian Federation as well as Slovaks and Czechs might be higher then last season. “We expect problems with regards to [the numbers of] Poles and Hungarians, especially as a consequence of the weakening of their national currencies against the euro, thus making holidays in Slovakia more expensive for them.”

Chudý does not expect any dramatic changes in accommodation prices and said this season’s prices should reflect only inflation. Prices in restaurants might be slightly higher, reflecting hikes in energy prices and inflation, and the prices of ski passes might also rise compared to last season.

Prepared for a lack of natural snow

Snow is the basic precondition for a ski resort to begin operating. To avoid slopes remaining bare despite sub-zero temperatures ski resorts across Slovakia have invested in snowmaking facilities. Now everywhere – weather-permitting – snowmaking devices are covering slopes with snow.

“The quality of ski slopes with a sufficient layer of snow, supplementary services and price will have the biggest influence on visitor rates,” Ladislav Kvak, director of Tatrawest, which operates the Roháče-Spálená ski resort in the Western Tatras, told The Slovak Spectator when asked about expectations for the upcoming season, adding that his company is recording interest in winter stays at the resort, especially in the form of money-saving ski packages.

At Roháče-Spálená a snow-making system has been installed which should result in better-prepared ski slopes. This winter some of its ski slopes will also be ‘allocated’ for snowboarders, while other terrain is suitable ski-alpinism (a combination of cross-country and downhill skiing, and mountaineering).

The Snow Paradise Veľká Rača Oščadnica ski resort said it has been preparing for the winter season since this summer.

“We have invested more in promotion than in previous years, whether in Slovakia, Poland or the Czech Republic,” Kristína Kočíová from the ski resort told The Slovak Spectator, adding that it also plans to pay more attention to the quality of the surface of the ski slopes. “Now people compare foreign ski resorts with Slovak ones and competition is high.”

Among novelties for this season Kočíová listed the resort’s extension of its parking lots, a new ski slope connecting the localities of Marguška and Laliky, and a new eight-hour ski pass that allows skiers to choose how much time they use each day. The resort also offers discounts on ski passes of up to 30 percent in combination with stays in local hotels or pensions. Polish skiers can pay for their ski passes in zlotys.

Preparations for the forthcoming winter season are also in their final stages in the biggest and most popular ski resorts in the High and Low Tatras.

“With respect to experiences from previous winter seasons, when we registered increases in visitor rates – the last season was one of the most successful so far – we believe that we will maintain this trend,” said Katarína Šarafínová, spokesperson for Tatra Mountain Resorts (TMR), which operates the Jasná ski resort in the Low Tatras and the ski resorts in Tatranská Lomnica, Štrbské Pleso and Starý Smokovec in the High Tatras. “Interest from clients is similar to previous years.”

Even though Jasná is already the biggest ski resort in Slovakia, with an extensive selection of ski slopes suitable for beginners up to seasoned skiers, TMR is continuing to invest there. This year it extended its snowmaking facilities, providing a guarantee of snow on 20 kilometres of ski slopes for at least five months a year. The company has also announced an end to the long waits for interconnection of the slopes in the northern and southern part of the resort, with the launch of construction of a cable car able to operate in winds of up to 120 kilometres per hour. It is scheduled to begin operating in the next winter season, 2012/13.

TMR operates slopes in the High Tatras covering almost 22 kilometres, where it also uses snowmaking equipment to guarantee snow for five months a year. At what is the highest altitude resort in Slovakia, in Tatranská Lomnica, it is this season putting into operation a new detachable eight-chair lift at Buková Hora, with the bottom station located at an elevation of 906 metres above sea level, near a car park. The top station is at an elevation of 1,040 metres. Šarafínová said this chair lift will be ideal for families with children. A new 2.7-kilometre blue slope, i.e. one designed for beginners and inexperienced skiers, on Buková Hora will be part of this project.

Skiers have in the past criticised individual ski resorts for failing to cooperate and selling non-transferable ski passes. This situation has improved and now skiers can buy a Slovakia Super Skipas valid in ski centres in the Low Tatras (Jasná), the High Tatras (Tatranská Lomnica, Štrbské Pleso and Starý Smokovec), at Park Snow Donovaly, at Snow Paradise Veľká Rača, at Malinô Brdo and at the Tatralandia aquapark, together covering a total of 94 kilometres of slopes.