Slovak wine tourism is still in its infancy

WINE has been made in the region of present-day Slovakia since ancient times but the country’s 40-year totalitarian regime suppressed small, private winemakers in favour of mass production, bringing a poor reputation to this traditional skill. The fall of the communist regime and open borders has brought new vigour to Slovak wine producers as well as more curiosity from wine amateurs as well as connoisseurs. There are now plenty of small and larger winemakers opening their cellars to more and more people who are interested in learning about wines made in Slovakia. But winemakers say Slovakia still has a lot of catching up to do to match the better-known wine tourism destinations in Europe. 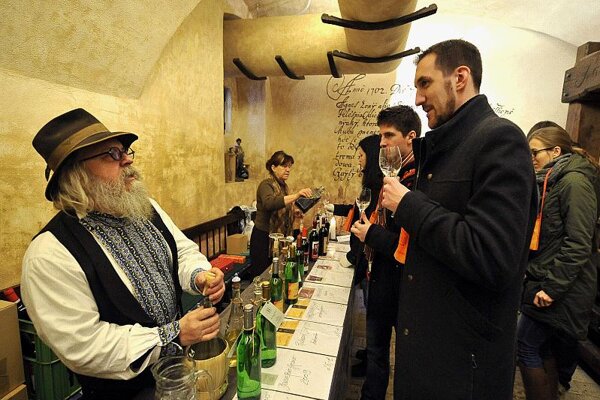 The Day of Open Wine Cellars in the Small Carpathians is popular with wine lovers. (Source: TASR)
Font size:A-|A+0

WINE has been made in the region of present-day Slovakia since ancient times but the country’s 40-year totalitarian regime suppressed small, private winemakers in favour of mass production, bringing a poor reputation to this traditional skill. The fall of the communist regime and open borders has brought new vigour to Slovak wine producers as well as more curiosity from wine amateurs as well as connoisseurs. There are now plenty of small and larger winemakers opening their cellars to more and more people who are interested in learning about wines made in Slovakia. But winemakers say Slovakia still has a lot of catching up to do to match the better-known wine tourism destinations in Europe.

“Wine tourism in Slovakia is still only at its beginnings,” Vladimír Mrva, a prominent winemaker and co-owner of the Víno Mrva&Stanko winery in Trnava, told The Slovak Spectator. But he sees a growing interest in wine in Slovakia. “Wine has become a phenomenon in Slovakia and that is a positive feature. People are interested in getting to know more about wine; they are actually hungry for more information.”

Mrva explained that during the communist regime there were only large wineries that were not interested in having wine lovers visit, and there was little interest among wine drinkers in learning more about Slovak wine varietals. He said the situation began to change after the mid 1990s when a new law on wines was passed, part of which included a wine classification system, as well as the fact that Slovaks were able to travel more easily to traditional wine-producing countries in Europe.

“They saw that wine is not only a beautiful drink but also has its traditions and history,” Mrva said. “They started to search for these [qualities] in Slovakia and required this as well from Slovak winemakers.”

The Small Carpathian Wine Route (MVC) is the oldest wine route in Slovakia and was developed in 1995 through the joint efforts of an association of winemakers, wine merchants, municipalities and tourism businesses in this region of the country. The aim of the association has been to foster the development of the Small Carpathian region, especially in tourism connected to its winemaking traditions.

MVC’s most popular event is its annual Day of Open Wine Cellars and its 12th edition was held on November 18-19. The region’s winemakers opened their cellars on these two days and offered young as well as vintage wines for tasting. A total of 130 cellars were open this year and, as in previous years, the 6,000 tickets for the 2011 event sold out quickly.

“This year was exceptionally successful,” Anna Píchová of MVC told The Slovak Spectator, adding that in spite of the growing interest as evidenced by the tickets selling out weeks before the event, the association does not plan to increase the number of tickets because it wants to maintain the comfort of visitors and allow them to meet and talk in person with the winemakers.

For those who did not have a chance to attend the November event, MVC offers a similar event in May, St Urban’s Day of Open Wine Cellars, which will be held for the 6th time in 2012, on May 26.

The Tokaj Wine Route is another well-known tourist destination, this one located in south-eastern Slovakia, in the historic Tokaj wine region. This is one of the few areas in the world in which three specific varieties of grapes can be successfully grown to produce the naturally sweet wines of the region, according to the association that sponsors the Tokaj Wine Route.
The Tokaj Wine Cellars Open Day is held each year in September and this year’s event on September 17 and 18 drew thousands of people.

Slovak wine routes are visited most often by Slovak and Czech tourists, but they also attract Austrian, Swiss, and French visitors as well as Poles who have discovered the fine wines produced in Slovakia.

“Poles have discovered Slovakia as a wine-producing region,” Píchová said. “They come here directly with the aim of tasting wines, not only while transiting Slovakia and travelling somewhere else.”

The Slovak Tourist Board (SACR) sees good prospects for the further development of wine tourism in Slovakia.

“We are preparing a new concept for promotion of wine routes and gastronomy and the Tokaj and Small Carpathian regions should be the key areas,” Peter Belinský, general director of SACR, told the Hospodárske Noviny daily in early October.

Mrva sees insufficient cooperation between wineries, hotels, restaurants and municipalities as being behind the underdeveloped state of wine tourism in Slovakia.

“Wine is only one part of a visitor’s itinerary,” Mrva stated, adding that since it is not easy to attract visitors to come to a region they should get a whole palette of opportunities: where to go, where to stay and eat, and what to see. “Now everybody is working on their own and the offer is not coordinated.”

He sees the short, 15-year history of modern winemaking in Slovakia as part of the problem.

“This is too short a time for germination of a network of facilities and preparation of an extensive offer as there is, for instance, in Austria, not to mention wine tourism areas in countries such as France, Italy or Spain,” Mrva stated.

Píchová also sees insufficient money as a problem, noting that winemakers in Morava, in the nearby Czech Republic, had a promotional fund of tens of millions of Czech crowns last year.

“We do not have such a fund,” Píchová said, adding that MVC must live on its own resources.

Nevertheless, Slovak wine-makers see a bright future in wine tourism and are expanding their facilities and offers. In addition to producing wines and arranging wine tastings, some are beginning to offer accommodation, along with gastronomic and relaxation services. J&J Ostrožovič, a producer of Tokaj wine, plans to build a golf course.

Víno Mrva&Stanko has also expanded its premises and now offers wine storage and accommodation in addition to wine tastings.

“We were inspired by what we saw at wineries in Australia and New Zealand, as well as in traditional European winemaking countries like France and Italy,” Mrva said. “We saw that it is ideal and each winemaker told us to let those who are interested in wine to come and see where our wine is produced, to touch the barrels and to breathe the aroma. This gives us the chance to explain our philosophy to visitors.”

This appears to have been a sound decision because Víno Mrva&Stanko now gets between two and three groups of visitors a day.

Some visitors are those who are just ‘starting with wine’ and seek basic information about wine varieties, how to select a wine to serve with individual dishes, and how to serve wine. Other visitors are wine connoisseurs with deep knowledge who, for example, ask for a vertical degustation in which they sample individual vintages of a specific varietal such as Cabernet Sauvignon and want a description and evaluation of individual years.

Other visitors are wine merchants and sommeliers who want to know more about the wine they sell or serve than is written on the bottle’s label.

Is rosé the future?

Mrva said Slovakia has diverse soil as well as different climatic conditions and this means several kinds of wines can be produced well, adding that the country belongs to the northern European wineproducing region and that provides Slovak wines with nice, piquant acids that make them very fresh and modern. He believes wines from southern regions, which are more alcoholic, lack this quality and the current trend among wine enthusiasts is to drink young and fresh wines. Mrva particularly sees rosé wines as an excellent opportunity for Slovakia and several rosé wines from his company have received prestigious prizes, with its Cabernet Sauvignon Rosé 2009 winning the Champion prize at the 2010 Vinalies Internationales in Paris.

“If Slovak winemakers work on it, Slovakia can become a country of rosé wines,” Mrva stated. “We have beautiful rosé wines that have won international prizes. These wines can show the diversity of our wines.”