MIDNIGHT on November 30, the moment at which hundreds of Slovak hospital doctors who had tendered their resignations as part of a labour protest became unemployed, saw the head of the Medical Trade Unions' Association (LOZ) in parliament, holding last minute talks with government representatives, via a mediator. But the talks eventually ended after nine hours without good news for patients. 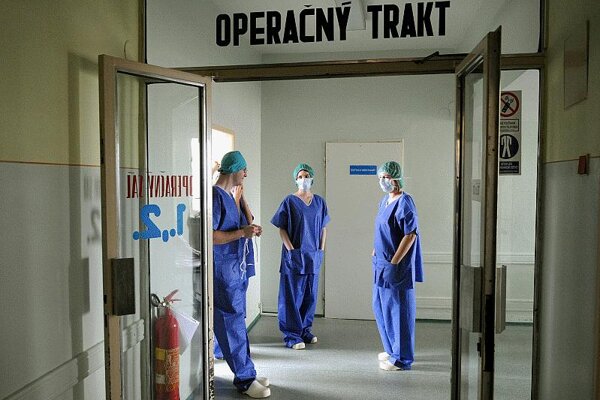 MIDNIGHT on November 30, the moment at which hundreds of Slovak hospital doctors who had tendered their resignations as part of a labour protest became unemployed, saw the head of the Medical Trade Unions' Association (LOZ) in parliament, holding last minute talks with government representatives, via a mediator. But the talks eventually ended after nine hours without good news for patients.

According to figures provided by the Health Ministry, 1,226 protesting doctors’ resignations became effective on December 1. The ministry reported that 2,439 hospital doctors, led by the LOZ, had originally filed resignation notices with their hospitals two months earlier.

Originally, the LOZ presented four demands: a halt to the process of transforming state-run hospitals into joint-stock companies; for the hospitals to observe the Labour Code when it comes to doctors’ hours and other working conditions; for the government to increase funding for health-care facilities; and for the salaries of doctors to be gradually increased based on a formula connected to average salaries in Slovakia. Only fulfilling these four demands would help improve the Slovak health-care system, the LOZ claimed.

“We offer a compromise solution, we are the carriers of the agreement,” LOZ representatives kept repeating at a press conference on December 1.

The talks on November 30 between LOZ head Marián Kollár, Health Minister Ivan Uhliarik, Prime Minister Iveta Radičová and Speaker of Parliament Pavol Hrušovský, mediated by the head of the Slovak Medical Chamber, Milan Dragula, were seen as the last chance to avert a walk-out, but they failed to produce a breakthrough.

Following the talks, LOZ representatives also blamed Finance Minister Ivan Mikloš for the deadlock, saying that he was not willing to allocate enough money to fulfil their demands.

“Today we really went with our demands under the mandate that we got from our people, to the level of €5.30 to €9.00 per hour,” Kollár stated.

Hrušovský, by contrast, said that the LOZ was not willing to reach a compromise.


“I heard from the trade unionists more about money than about patients,” he said following the talks.

But the LOZ blamed the government for not wanting to agree, complaining in a statement published on its website that the minister only wanted to count “how many of our fighters will leave the battlefield”.

“Then they offered us an agreement which you have already rejected once,” the LOZ told the protesting doctors via its website. The union leaders said they would demand new contracts for the doctors who had resigned, with salaries clearly stated and with no probationary period.

Uhliarik called on the doctors to return to their patients, adding that the legal issues surrounding the resignation and immediate re-hiring of doctors was a “minor issue” at that point.

In the last days before December 1 talks between the LOZ and the government were reduced solely to the issue of pay.

Following an extraordinary session of the cabinet on November 26 the health minister ordered hospital directors to prepare appendices to contracts for all doctors working in their respective hospitals, which would increase the salaries of doctors in such a way that as of January 1, 2012, their salary bases would be increased by €200 on average, with the result that no doctor would earn a basic salary of less than €807, and as of April 1, 2012, by another €100 on average, to guarantee a minimum basic salary of €900 to each doctor.

The basic salary increase would be differentiated so that it reflected a doctor's level of education, experience and expertise. The minister also ordered that the increase should not be compensated for by lowering other parts of the doctor’s salaries.

All the doctors who withdrew their resignations between November 28 and November 30 also signed the appendices granting them the stated salary increase.

Some doctors withdrew, some stayed at home

On November 28 the cabinet also passed a declaration of a state of emergency in 15 Slovak hospitals, to be ready in the event that hundreds of doctors left their jobs on December 1. This would allow doctors to be ordered to report for work, on threat of prosecution, in order to avert a threat to public health.

The 15 designated hospitals would be lacking, in particular, anaesthesiologists, a key profession for a hospital, since without them it is not possible to perform surgery and other major procedures. Many of the hospitals also expected to be missing surgeons, gynaecologists, and neonatal doctors.

Despite calls from the LOZ to protesting doctors to “not get corrupted by €300”, many of the resignations were withdrawn by midnight on November 30. With most of their doctors withdrawing their resignation notices, the ‘critical’ hospitals in Košice (both the teaching hospital and the hospital for children), Bojnice and Poprad, plus the hospital in Skalica, were able to open normally on December 1.

Several of the most seriously affected hospitals, however, had to switch to crisis mode on November 30, a day earlier than expected, after many protesting doctors did not turn up for work or left before the end of their normal shifts. Most of them claimed they were ill.

Widespread reports of simultaneous illness afflicting protesting doctors came after the LOZ, via its website, advised members on November 29 that if they were forced to work under the state of emergency, they should perform their job “very, very, very cautiously”, and should make their patients sign an “informed consent” form to say that they appreciated the risks of being treated by a doctor who was working under stress and exhaustion-inducing pressure. The LOZ advice added that the doctors should not hesitate to visit a psychiatrist if they felt like they needed advice on how to deal with stress.

In an attempt to relieve the crisis situation in Slovakia, Minister Uhliarik approached his counterparts in neighbouring countries to seek their help. He reported that Austria had offered to treat Slovak patients in its hospitals.

In a letter to his Slovak counterpart, Czech Health Minister Leoš Heger said he would do everything to help.

The Czech cabinet was scheduled to meet at an extraordinary session on December 2 to discuss sending Czech army doctors to Slovakia, the SITA newswire reported. Slovakia reportedly asked for specialists in surgery, anaesthesiology, traumatology and urology.

In response to the crisis in Slovakia, Hungary has also boosted emergency health care provision in border areas, where 13 hospitals are now ready in the event that they have to admit patients from Slovakia, the TASR newswire reported.

Meanwhile, the LOZ advised protesting doctors to “take a day to rest” and “finally be with their families”.

“Let us show them that we are irreplaceable,” the LOZ wrote on its website, adding that there was no need for doctors to report their newly unemployed status at their respective labour offices, as there is a seven-day notice period for that.

“The government wants to show us that hospitals don’t need doctors,” the statement reads. “Let us show them that hospitals are neither buildings nor machines, but people. People – doctors – who are not corrupted and have their pride and honour.”

LOZ was scheduled to hold further talks with government representatives on December 1. No further information was available as The Slovak Spectator went to press.