EVERY November Bosnia and Herzegovina celebrates the anniversary of the Dayton Accords, the peace agreement which brought to an end the devastating war that from 1992 to 1995 claimed 100,000 lives and dispersed a million people. However, the two primary political objectives agreed upon by the country’s government following the establishment of peace remain distant, made inaccessible by a number of entrenched obstacles. Over the past year, a Slovak NGO has been working with Bosnian officials to help the country to finally overcome these difficulties. 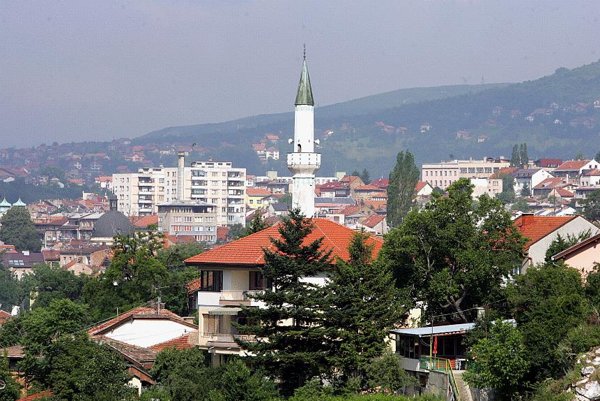 
EVERY November Bosnia and Herzegovina celebrates the anniversary of the Dayton Accords, the peace agreement which brought to an end the devastating war that from 1992 to 1995 claimed 100,000 lives and dispersed a million people. However, the two primary political objectives agreed upon by the country’s government following the establishment of peace remain distant, made inaccessible by a number of entrenched obstacles. Over the past year, a Slovak NGO has been working with Bosnian officials to help the country to finally overcome these difficulties.

“Immediately after the Dayton agreement we had two main political goals: full membership in the EU, and full membership in NATO,” said Fuad Šabeta, currently Director of the Department of Peace and Security within Bosnia’s Foreign Ministry. Šabeta has worked in the Foreign Ministry since 1992 and attended its first session following the signing of the Dayton Accords. He is clear on the benefits that joining NATO in particular would bring Bosnia.

“It [NATO] can guarantee a small country like ours security, and security brings stability, which encourages investment, and so creates jobs – we have 50 percent unemployment here, so that is very important,” Šabeta said. “Ultimately, it creates higher standards of living.”

He pointed to Slovakia’s development as demonstrating the importance of integration: “It is simply not possible to compare Slovakia today to Slovakia 15 years ago [before it had joined either NATO or the EU].”

Bosnia and Herzegovina, however, will enter 2012 yet to become a member of either institution.

To help Bosnia move towards successful integration, the Slovak Atlantic Commission, a Slovak NGO, established a project in November 2010 aimed at transferring the know-how gained from Slovakia’s own experience of accession in the 1990s. The project, ‘Improving Democratic Institutions – Door to Europe’, drew to a close in November 2011. During a conference held on November 23 members of the SAC and Bosnian officials discussed the project’s success, and the challenges still to be dealt with.

“We focused mostly on Security Sector Reform and on the strategic defense review, both of which are necessary for accession to NATO,” he said.

The SAC’s President, former Slovak Ambassador to the U.S. Ratislav Káčer, outlined why he felt Slovakia was well-placed to provide guidance to the Bosnian officials who had taken part in the project.

“We have many things in common,” he asserted. “Slovakia was born out of the decay of Czechoslovakia just as Bosnia and Herzegovina was born out of the dissolution of Yugoslavia. We are a small nation which didn’t play a superior role in our previous relationships. We have experienced life under a totalitarian regime, as you have.”

Fuad Šabeta outlined a number of areas in which Slovakia’s insight and expertise had benefited the project’s participants.

“Firstly I think the Visegrad group is very successful, and some kind of Visegrad group in this region would be good,” he began. “Secondly, you have fresh experience with European and NATO integration, all of which can help to reform our institutions. This is very important.”

On the other hand, he warned against assuming too great a similarity between the two countries, highlighting some major differences between the challenges faced by each in their ambitions to Euro-Atlantic integration.

“I always admire how Czechoslovakia divided, peacefully,” he said, emphasising that the experience of his homeland was completely different, resulting in many victims.

One particular aspect of this history places distinctive difficulties in the way of Bosnia’s efforts to join NATO. A significant challenge facing the government involves persuading the population of Republika Srpska, the Serb-dominated region in the north and east of Bosnia, to support integration. In this case too, Šabeta sees potential for the experience of Slovakia to assist Bosnia.

During the Bosnian War, between April 1994 and August 1995, NATO carried out sporadic air strikes against the military of Republika Srpska. In July 1995, Serb paramilitaries massacred the inhabitants of Srebrenica. In August, a market in the centre of Sarajevo was shelled by the Republika Srpska army, killing 37 people. This bloodshed triggered NATO’s launch of Operation Deliberate Force, a sustained air campaign against the Bosnian Serbs.

Four years later, during the Kosovo War, NATO bombed the Federal Republic of Yugoslavia, consisting of what are now the separate countries of Serbia and Montenegro. Codenamed Operation Allied Force, the airstrikes targeted strategic economic and military positions including installations in Belgrade.

Today, Bosnia and Herzegovina is divided into two entities. The Federation of Bosnia and Herzegovina is primarily inhabited by Bosniaks and Croats. Republika Srpska continues to be mainly composed of Serbs. As Šabeta explained, whereas the Federation has a huge majority in favour of joining NATO, over 90 percent, in Republika Srpska accession has traditionally had very little support, only 22 percent.

Bosnia’s decision to join NATO will have to be ratified by a national referendum. This makes convincing the inhabitants of Republika Srpska vitally important, Šabeta said.

“In 1992 we had huge problems with a referendum,” he explained, referring to the 1992 vote on Bosnian independence from the rest of Yugoslavia that was boycotted by the majority of the country’s Serbs. The result produced 98% support for independence, resulting in severance from Republika Srpska and sparking a controversy that ignited the Bosnian War.

“We have to do everything to have a majority in Republika Srpska in favour of integration,” Šabeta concluded.

Persuading the inhabitants of Republika Srpska will require Bosnia and Herzegovina’s officials to utilise skills beyond effective government administration. Whereas the Slovak Atlantic Commission’s project focused on institutional reform, particularly of the country’s Security Sector, Šabeta emphasized the need to communicate with those citizens opposed to accession. He told members of the SAC that it is in this area that Slovakia could provide guidance in the future.

“I want to concentrate on public diplomacy,” he said. “We have to explain to people in Republika Srpska that NATO is not a military organization, NATO is a civil organization. Ambassadors in NATO are creating decisions, not soldiers. The military is only a part of NATO.”

According to Šabeta, it is important that politicians from parliament understand enough about the issues to give a positive and persuasive speech.

“If we have cooperation with Slovakia, this will help inform our politicians and strengthen their arguments,” Šabeta said.

He added that Bosnia’s media could also benefit from collaboration with Slovakia.

While Šabeta’s concern was mainly with the future referendum, other participants in SAC’s conference focused on the debilitating political crisis that has left Bosnia without a government for the past year. This crisis presents further deep-rooted difficulties that must be disentangled before the country can join Slovakia as a member of NATO and the E.U.

Denis Hadžović, Director of the Centre for Security Studies, a research NGO based in Sarajevo which partnered the SAC in the project, suggested that Bosnia was in a desperate situation.

“I think this project has additional value, as it is being implemented by a country that fully understands how desperate we are in Bosnia in the current political environment,” he said.

According to Hadžović, this crisis began in 2005-6.

“Since 2006 we have experienced a steady deterioration of the political situation in Bosnia and Herzegovina,” he said. At this point, “the success story of the first ten years following the peace accords” came to a sudden halt.

As part of the Dayton Peace Accords, the international community created the position of High Representative in Bosnia and Herzegovina, to guide and oversee implementation of the civilian aspects of the peace agreement. The incumbent, who has been drawn from countries including Germany, the UK, and Slovakia, was invested with the power to impose legislation and dismiss elected politicians. Hadžović explained that it was the attempt to withdraw this undemocratic international control and reinvest sovereign power in Bosnian hands that precipitated the current political crisis.

“The crisis overlapped with the creation of an exit strategy for the international community,” he said. “From that period on we have been faced with a political crisis as we’ve tried to transfer their competencies to the state. We have had very long and unsuccessful political negotiations, we had elections more than one year ago and we still have not succeeded in establishing a state government, or a budget for this year.”

For now, the exit strategy remains unfulfilled. In 2008, the mandate of the High Representative was extended indefinitely. Simultaneously, a package of benchmarks was drawn up that must be met before the High Representative’s position is abolished. Certain of these criteria correspond to SAC’s work during their year-long project. In particular, one benchmark highlights security sector reform, and the case of 69 military properties that since the war have remained beyond the control of the central government, despite concerted pressure.

“The main issue concerning Security Sector Reform is the issue of the 69 military properties,” explained Tomáš Špavelko, “which are still owned by local structures (districts, municipalities, towns etc.). There seems to be no simple way to transfer these properties under the central government. This is the main recent obstacle in the NATO accession process.”

Unsurprisingly for a country without a government, another benchmark involves strengthening institutions and improving the efficacy of state-level governance. Špavelko suggested that an inefficient mechanism for state governance has caused many of these problems.

“The three nationalities (Bosniaks, Croats, Serbs) shift within a rotating presidency. This has proved to be extremely inefficient as they keep blocking and disagreeing with each other,” he said.

Together with persuading the citizens of Republika Srpska, these are the main challenges that face Šabeta if he and his colleagues are finally to achieve the goals they set themselves a decade and a half ago. They are daunting, but Šabeta remains determined.

“NATO and the EU are so important and we have to be inside, we must be inside. And we will be inside – not as soon as possible, faster than it is possible to imagine today.”