Observing the results of corporate philanthropy

CORPORATE philanthropy is now widely recognised in Slovakia and has become part of the DNA of many local companies. But whereas companies once donated time and money somewhat indiscriminately, they now consider very carefully where their donations, either financial or non-financial, go and closely observe the outcomes they generate. 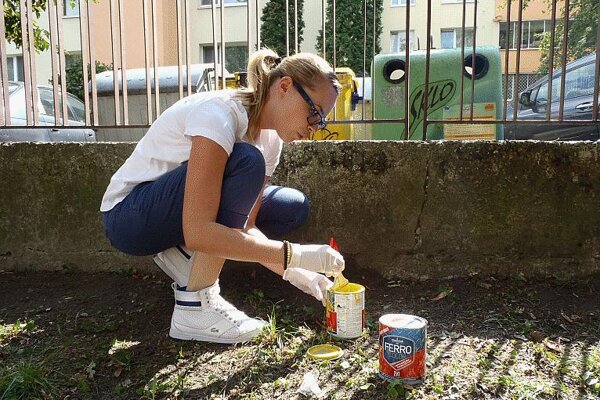 CORPORATE philanthropy is now widely recognised in Slovakia and has become part of the DNA of many local companies. But whereas companies once donated time and money somewhat indiscriminately, they now consider very carefully where their donations, either financial or non-financial, go and closely observe the outcomes they generate.

In the 1990s after the fall of the communist regime, as a fully-fledged private sector emerged, firms were just learning how to do business. There were no large foreign investments and many local nouveaux riche spent their first earnings on opulent villas and new yachts, recalls Pavel Hrica, programme director for corporate philanthropy and sustainability of non-profit organisations at the Pontis Foundation, an NGO.

In the first decade of the twenty-first century large international firms began to thrive in Slovakia and these brought with them the principles of corporate responsibility and philanthropy, Hrica told The Slovak Spectator. Local managers learned corporate philanthropy gradually. At first they supported ‘ad hoc’ causes that they found in their mailboxes and only later began to select target themes such as children, art or the environment. This led to measurement of how donations were used.

“This natural development has culminated in the current efforts to monitor the real impact, i.e. the change happening thanks to corporate philanthropy,” Hrica told The Slovak Spectator. “In the past a company gave a challenged person a computer. Later it found out that it is better to also support a PC course so that [the person] can use the computer or even use it to get a job. Today an aware company not only observes the number of participants in a PC course, but aims to monitor whether these people, thanks to their support, also manage to get jobs.”

Pontis itself offers companies a methodology which allows them to obtain a very precise picture about their donations, thus helping them to make better decisions.

Comparable with the West

Corporate philanthropy in Slovakia is comparable with the situation in the wider central European region, and in some respects is in a leading position.

“Corporate philanthropy is more developed in Slovakia than in neighbouring countries; here we can compare with the West,” Hrica said, pointing out that the system of assigning 2 percent from companies’ income taxes has helped to create a system of company foundations and funds, as well as standardised grant programmes. “Thanks to this companies are much more interconnected with the community than they would have been without the system.”

According to Hrica, critics say that assigning 2 percent from income taxes is actually a brake because it gives companies the feeling that they have already contributed to the community. He sees current legislation, which has decreased the assignment to 1.5 percent but allows a company to assign 2 percent providing it also donates an amount equal to 0.5 percent of its income tax, as being optimal.

“Alas, in the future this percentage of income tax is due to decrease,” said Hrica, adding that it will be necessary to seek different ways to support society. The Slovak parliament in late November preserved the current system for another year, while the long-term plan of the Finance Ministry is to increase the voluntary donations that companies must make in order to qualify for the 2-percent assignment.

The Slovak Donors’ Forum (FD) also disagrees with this change, arguing that it will lead to a fall in funds for the non-profit sector. It also argues that it would contribute to the misuse of terms such as assignment of income tax, donation and sponsorship.

FD says that while the most important thing is still for a company to thrive and generate a profit for its owners or shareholders it must, along with a long-term strategy for its own development, also observe how the values of the society in which it operates are changing.

“Firms whose strategy counts on the fact that corporate engagement in projects with a public benefit are an important part of how they do business, gain a long-term competitive advantage,” Katarína Podracká, manager of FD’s corporate philanthropy programme, told The Slovak Spectator, stressing that philanthropy provides new communication opportunities for companies to build their reputations.

According to FD surveys, employees appreciate and support the philanthropic activities of the companies in which they work. This strengthens loyalty and enables employees to gain new skills and experiences.

Hrica listed among the benefits that accrue to companies by giving as being the enthusiasm and loyalty of employees, teambuilding, new partnerships and contacts, the gratitude of the public and even increased sales. According to Hrica, the latter is not a myth: he cites the example of an IT company which developed an internal management system for Pontis for free but now realises it can sell the product to commercial customers. Here Hrica highlighted that companies have to be faithful in their philanthropic plans from the very beginning as people are not stupid and figure out if a company communicating its selflessness has commercial goals. His experience is that if companies behave selflessly, benefits and positive perceptions, even unexpected ones, occur spontaneously.

In the current economic climate companies are being more careful with their expenses, including their philanthropic donations. Hrica sees this as natural, as companies are behaving more thriftily in general and are trying to make their engagement in philanthropy more strategic.

“They support themes linked with their core business,” said Hrica. “They try to enlarge their social impacts and cut off various ad hoc support. They are also using more non-financial support. They engage their employees in volunteering and they provide their services or products for free.”

“BLF members pick their partners and projects strategically; they focus more on the quality of projects, since they have to justify all expenditure,” Ružická told The Slovak Spectator, adding that BLF members are developing more non-financial forms of support. They select long-term projects close to their fields of business and often involve their employees or external experts when deciding which projects to support.

The share of non-financial donations among all donations confirms this trend, with non-financial aid increasing from 17 to 21 percent compared with the previous year, according to Podracká.

With regards to new trends, Podracká said that the traditional perception that corporate philanthropy benefits either the company or the community is changing.

“Companies which have been engaged in society over the long term and strategically do not perceive philanthropy as a loss or as curtailing the profit of shareholders,” said Podracká. “On the contrary, they believe that through considering how to help, using effective tools, and monitoring the impacts, philanthropy can also have a positive economic effect on the company in the long-term.”