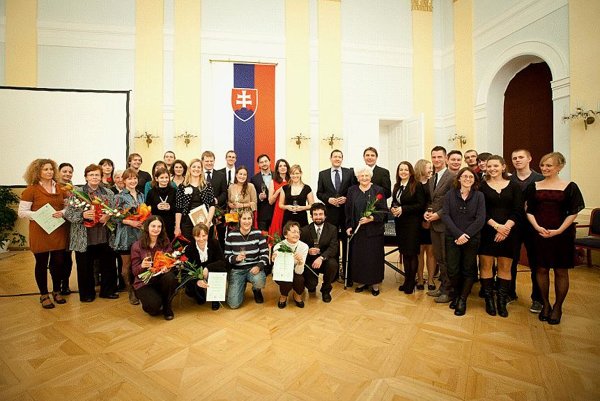 “We thank all volunteers who contribute to well-being and solidarity among people and give their abilities, enthusiasm, energy and hearts for the benefit of others,” stated Alžbeta Mračková, the executive director of C.A.R.D.O., Slovakia’s National Volunteer Centre, at the ceremonial evening, noting that this was an exceptional year for Slovakia. “It brought a law supporting volunteering that does not burden it with useless bureaucracy, as well as long-awaited research and various discussions and seminars. The year also opened other themes which we plan to work on together with the state, public administration and firms.”

The Iuventa organisation, part of the Ministry of Education, Science, Research and Sport, was the primary coordinator of the European Year of Volunteering (EYV) activities in Slovakia in cooperation with other active volunteering organisations who jointly established EYV goals for the country during 2011, such as research to get a current picture about volunteering in Slovakia, adoption of a law on volunteering, and more promotion of volunteering across the country.

“I view the course of the EYV in Slovakia positively,” Gabriela Gliševičová of Iuventa told The Slovak Spectator. “Many actions proved that people are willing to volunteer, to work without a reward and that what they need is only provision of such an opportunity and information about these opportunities.”

Alžbeta Brozmanová Gregorová from the Volunteer Centre (Dobrovoľnícke Centrum) in Banská Bystrica added that various activities during the EYV helped to fulfil the Slovak objectives for the year, such as making volunteering more visible and acknowledging the work of volunteers.

“But in my opinion some activities should have gotten better coverage in the media," Brozmanová Gregorová told The Slovak Spectator. "I do not see the problem as insufficient effort by organisers in getting media coverage but rather in the low interest from media in this issue.”

Experts from volunteer centres and universities conducted extensive research in 2011 to provide a comprehensive picture about volunteering in Slovakia, as its forms and relative importance have changed over time.

The research had two parts, the first a survey among a sample of 973 people, 15 years and older, conducted during May and June. The second, more qualitative, part adds to the overall picture of volunteering in Slovakia and conditions for its further development. The initial results of the research are available but further processing of the collected information and distilling it into appropriate findings is continuing.

“This is the first research of such an extent on volunteering in Slovakia,” Mračková stated, adding that the research was possible only because of money that came to Slovakia through the EYV. “Finally, we have solid, comprehensive data about volunteering. We now know what motivates people to volunteer and what distracts them from volunteering; we also now have information about whether organisations know how to or don’t know how to work with volunteers, and so forth.”

Brozmanová Gregorová told The Slovak Spectator that the research results showed that 27.5 percent of citizens over age 15 participated in formal volunteering, meaning that they volunteered for an organisation or via an organisation during the last 12 months. In the same time period 47.1 percent of those surveyed had participated in informal volunteering, meaning they had directly helped someone outside their own family and household. One-half of all those surveyed had engaged in at least one form of volunteering in the previous 12 months.

She noted that it is more typical for Slovaks to be engaged in volunteering based on altruism and regular and long-term help linked with a specific organisation.

“People volunteer because they want to help others but also because they realise a benefit from volunteering for their own personal development and self-realisation,” said Brozmanová Gregorová.

Mračková sees the results of the survey as positive because they show that people are interested in volunteering but added that the results show they often lack essential information.

“These results were surprising to me as I had expected numbers a bit lower,” Mračková told The Slovak Spectator, recalling results of similar research conducted in the past. “We are now at the average level of the EU, and that is very nice.”

Mračková said there are countries in western and northern Europe with a higher proportion of citizens who volunteer but added that there is a longer tradition of volunteering in those countries and that the economic situation of their citizens is better; something which she believes is interconnected. She noted that some countries, for instance Romania and Bulgaria, have less than 20 percent of their citizens involved in volunteer activities.

The survey found several barriers to recruiting volunteers: not being asked to help topped the list with 40.4 percent of the respondents noting that this applied to them, followed by lack of information about where to volunteer (36 percent) and lack of time (35.7 percent).

The fact that people did not volunteer because they were not asked to help is linked with the findings about a lack of information about volunteering, indicating there is still inadequate promotion among the public about where, how and what kinds of help a volunteer can provide.

To mark the EYV, Slovakia’s third year of holding a national Day of Volunteering was extended to two days, September 23 and 24, with volunteering events being held in 65 towns involving a record of 6,651 volunteers who gave a total of 23,870 hours of their time. The volunteers painted rooms and fences, did cleaning and gardening, spent time with seniors or patients in hospitals and also made gifts. The number of volunteers more than tripled in 2011 compared to previous years.

“The results exceeded all volunteer projects organised thus far in Slovakia,” Mračková stated, as quoted by the TASR newswire in late September, ascribing the high turnout to good weather as well. “But I think that we achieved this high number because of people who care for their environment and for those who need their help.”

Students in basic and secondary schools, company teams, small groups of seniors as well as individual adults all participated in the Day of Volunteering.

Another outcome of the EYV is a new joint Platform of Volunteer Centres and Organisations launched by C.A.R.D.O. and four other volunteer centres in Banská Bystrica, Nitra, Prešov and Košice Regions after the centres realised the importance of joining hands to lobby for their common interests.

“This is a new grouping that will try to take systematic steps to develop volunteering in Slovakia in cooperation with the state, local administration and companies,” Mračková said. “One of our tasks is to persuade the Slovak Statistics Office to monitor volunteering in Slovakia as statistical data should be collected not only about the number of volunteers and hours worked but also about the value of undertaken volunteer activities.”

Even though the activities in Slovakia within the European Year of Volunteering brought more information about volunteering and more respect for volunteers, organisations active in volunteering think the current situation is far from ideal. Nevertheless they are optimistic about the future.

“I believe that volunteering will develop in Slovakia and especially the number of people involved in formal volunteering will increase,” Brozmanová Gregorová said, adding that she expects that volunteering in Slovakia will keep its traditional form but admitted it is necessary to consider new trends such as more professionalisation of those organising volunteers, raising the number of people who volunteer to achieve personal self-fulfilment goals as well as those who are motivated by activities focused on their personal interests.

Brozmanová Gregorová and her centre also believe it is important to continue conducting research about volunteering and ways to better support it.

“It is also important to pay attention to development of volunteer centres and programmes and their support from the side of the state and local administration,” said Brozmanová Gregorová. “In cooperation with Matej Bel University we would like to convey the service-learning concept into education in Slovakia.”

Mračková also has ambitious plans for herself and for C.A.R.D.O. for 2012, which has been designated by the EU as the European Year for Active Ageing and Solidarity between Generations.

“We want to continue with respect to these European themes for next year because volunteering by seniors and by older people is a topic that interests us, one which we have been working on for years,” Mračková stated.

In describing her expectations for the further development of volunteering in Slovakia, Mračková had a ready list of goals she plans to pursue.

“My expectations are rather visions that I would like to fulfil,” Mračková stated, listing in addition to better statistics on volunteering: better cooperation with the state not only at the level of state bodies but in support for regional volunteer centres and building an infrastructure for volunteering so that each region has its own volunteer centre that promotes volunteering and interconnects volunteer organisations; educating organisations to work better with their volunteers; achieving more cooperation with municipal governments; introducing the theme of volunteering into curricula at schools; involving the schools more in volunteer activities; and joining young people with the communities in which they live through volunteer work.

“This is also why we launched the [joint] platform: to persuade the state that there is a need to develop these centres,” Mračková said, highlighting the importance of volunteer centres and their quality in advancing volunteering in Slovakia.