BRATISLAVA is perhaps not the veritable cultural hub of Europe but its central location and its proximity to other nearby capitals makes it a good base for a dance company that wants to offer its performances to a wide audience. Balet Bratislava, a new dance company, recently established itself in the Slovak capital and on November 11 premiered its first piece – Romeo and Juliet – choreographed by Mário Radačovský, the company’s artistic director, to the music of Sergei Prokofiev. 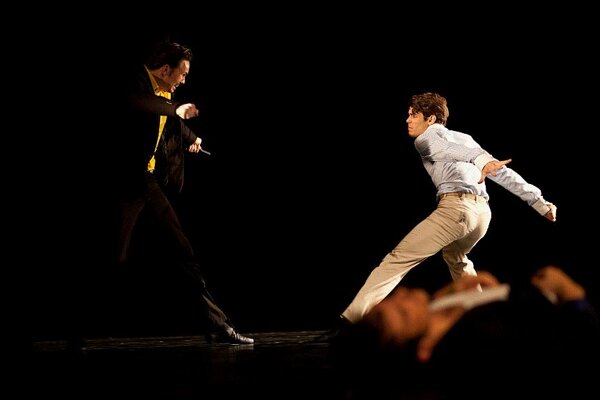 BRATISLAVA is perhaps not the veritable cultural hub of Europe but its central location and its proximity to other nearby capitals makes it a good base for a dance company that wants to offer its performances to a wide audience. Balet Bratislava, a new dance company, recently established itself in the Slovak capital and on November 11 premiered its first piece – Romeo and Juliet – choreographed by Mário Radačovský, the company’s artistic director, to the music of Sergei Prokofiev.

“I think Romeo and Juliet is a great piece for both dancers and the audience. It is right in between classical and modern styles and is rich in emotions and movement,” Artur Abram, 22, who plays Romeo in the second alternating cast, told The Slovak Spectator. Abram, of French origin, met Radačovský in Montreal where he studied classical dance and said performing in this ballet was very enjoyable as he was freed from some of the rules of classical dance and it incorporated some aspects of modern dance.

“We are a neo-classical ensemble – somewhere between classical ballet and contemporary dance,” Radačovský told The Slovak Spectator, adding that the new dance company wants to attract receptive audiences in the 18 to 50 age group and does not plan at this time to attract younger audiences. His vision is to offer a high-quality medley of classical and modern dance.

“We want to be progressive, like the ballet used to be when it first appeared,” Radačovský stated. “It was kind of a breakthrough, something new and visionary. Dance now asks for something modern and surprising, too. But this kind of combination must be clean and perfect in technique. ”

Balet Bratislava consists of only about 16 full-time dancers and Abram said he found that setup very practical and appealing.

“We alternate; when I am not Romeo I am in the corps de ballet and I dance from the first minute to the last,” Abram said in describing his work in the small, but international team. “I really enjoy it – we never sit on our bottoms and that is exciting. Our company is what you might call a ‘chamber ensemble’ and that makes it easier to give guest performances in other cities as we do not have many props and accessories and use just a small van to travel around.” He added that the dancers engage in “healthy competition”, explaining that working in this dance company is both challenging and energising because the dancers do not come from only one dance school or from a narrow environment where everyone knows everyone else and there are no surprises.

Balet Bratislava has its home base at the Nová Scéna theatre and is planning to present its newest production to the public on January 22, a three-piece ballet choreographed by Radačovský and two other Slovak choreographers, Šárka Ondrišová and Stanislava Vlčeková. Radačovský said Balet Bratislava will first concentrate on performances in Bratislava and its surroundings (it has already performed in Nitra) but also plans to travel to Hungary, the Czech Republic and other countries.

The ensemble has already danced in Bucharest and it will give its first performance with the Prague Chamber Ballet on December 11 with a piece called Three Duets, created by Radačovský to the music of Frederic Chopin. Balet Bratislava is also seeking to collaborate with the ballet company in Győr, Hungary and with other well-known choreographers. In March, Balet Bratislava will offer two performances choreographed by well-known Czech choreographer Jiří Kylián, Falling Angels and Šesť tancov (Six Dances), as well as dances choreographed by Libor Vaculík, also from the Czech Republic.

Radačovský offered his opinion that audiences will more often forgive a slight slip by a dancer than lack of enthusiasm, adding that losing an audience’s attention, the emotional grip on them, is the worst thing that can happen to a dancer and that this connection is very fragile. He said five minutes of a weak performance can cause an audience to lose its focus and it can then take thirty minutes to regain it.

Abram added his view on how dancers can maintain this enthusiasm.

“Sometimes, a small change can keep performers alert and improvising. Merce Cunningham, the famous choreographer, used to rehearse an entire piece with different music until the premiere, and then at the premiere add the real, original music. This gave the dancers a different approach, forcing them to be more attentive and avoiding routine.”

“We had a bit of a problem with the lighting and Radačovský kept changing it, so every time it was something new, creating a new challenge,” Abram said. “Thus we had a tendency to improvise. For example, I liked the staging in Nitra where the stage was completely different than at Nová Scéna. We had to fill the stage in another way and since we did not have much time to rehearse, everything was sort of a surprise and it was fresh and full of energy.”

Abram added that it is not always easy to find the right balance between freshness and pressure. “Performers maybe give their best with some tension. But too much pressure – like at an important premiere – is not good, either, and it can cause dancers to virtually freeze.”