Slovakia can be a final destination for migrants

ALTHOUGH hundreds of Slovaks leave the country every year to look for a better future abroad, Fernando, a young man from Guatemala, found happiness in Slovakia after he fell in love with a Slovak woman, the Slovak traditional dish, bryndzové halušky, and the cold weather. 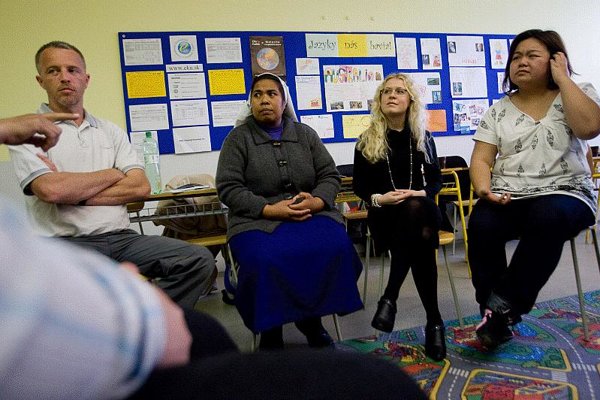 ALTHOUGH hundreds of Slovaks leave the country every year to look for a better future abroad, Fernando, a young man from Guatemala, found happiness in Slovakia after he fell in love with a Slovak woman, the Slovak traditional dish, bryndzové halušky, and the cold weather.

Slovakia is increasingly changing from being only a transit country to becoming a final destination for many immigrants. The number of foreigners residing in Slovakia has almost tripled over the last few years from 22,108 in 2004 to 62,584 in 2010, according to data from the Bureau of Border and Alien Police of the Police Corps Presidium.

The number of foreigners residing in Slovakia in 2009 corresponded to 1.16 percent of the total population. In comparison, around 50,000 Slovaks lived and worked in the UK alone in 2010 according to the British Office of National Statistics.

Migrants choose Slovakia for diverse reasons. The results of a research study entitled Public Attitudes towards Foreigners and External Migration to the Slovak Republic conducted by the International Organization for Migration (IOM) showed that Slovaks often perceive foreigners as refugees.

However, only 822 asylum seekers were recorded in 2009 compared to 6,092 labour migrants, 841 students, 4,565 migrants who were granted a residence permit for the purpose of family reunification and 9,994 migrants who came for other reasons, as stated in the report Slovakia – the Extended Migration Profile, prepared in the framework of the IOM’s Building Migration Partnerships initiative.

Fernando is one who came for ‘other reasons’. He met his Slovak wife 10 years ago during his studies in the US. After several years of living together in New York they came to a point in their relationship when it was necessary to make a decision about their future country of residence.
Since life in Guatemala seemed more dangerous than life in Europe, they moved to Slovakia.
Little did he know when he arrived in March 2010, how much time and energy the whole process of acquiring a residence permit would take.

Neither he nor his wife was familiar with all the requirements they had to fulfil so they began to search for relevant information the day they arrived in Slovakia. Unfortunately, the majority of people they were dealing with at different state agencies did not speak English so the language barrier made Fernando dependent on help from his wife and her family.

“The very first three weeks we were having a hard time,” Fernando said in an interview with The Slovak Spectator. “We went to different places and all of them had very little or no information at all. They [Slovak institutions] were just sending us back and forth.”

Their struggle continued until they discovered the IOM’s Migration Information Centre (MIC) in Bratislava.

The MIC provides counselling to migrants who are already living legally in Slovakia, or those who are planning to live and work here for a longer period of time, through personal consultations in its Bratislava and Košice offices or through its information helpline 0850 211 478. The centre focuses on providing legal assistance and job counselling – including requalification courses – and cooperation with migrant communities.

“It was a breakthrough step in our quest to find out all the things we needed to do,” recalled Fernando. After he found all the information in one place where it was possible to communicate in English, he could begin to apply for his residence permit.

The MIC also works on capacity-building among police officers and employees of state institutions and local governments who deal with migrants by improving their intercultural skills.

Likewise, with the help of cultural mediators who represent migrant communities and are aware of the problems faced by migrants, the MIC supports meetings, social events and the cultural life of these communities in Slovakia.

Getting a residence permit

Because Fernando was married to a Slovak citizen he could directly apply for a permanent residence permit. But Fernando still had to submit various documents to the Border and Alien Police unit.

One of the biggest problems which foreigners usually face when applying for their permit is proving a clear criminal record by submitting extracts from the criminal register of the Slovak Republic, criminal records from their country of citizenship and from any other country where the applicant has resided within the last three years.

Documents from countries other than Slovakia must be apostilled or superlegalised, i.e. verified, and then be translated into Slovak by an official translator.

Fernando faced some further complications, such as the 2010 volcanic eruption in Iceland that delayed the arrival of an aeroplane delivering Fernando’s documents from Guatemala that resulted in the expiration of some of them, and the fact that the nearest Guatemalan embassy is in Austria.

It turned out that the whole process of submitting and assessing his case took more than the three months for which he had approval to stay in the country, so he had to leave the European Union. He returned from Guatemala in September after his application had been approved.

“Once I moved here, my passport was in my pocket nonstop until I got my residence card,” Fernando said. “It is a relief that I do not have to take my passport with me everywhere now.”

But according to the new law he will be obliged to carry his passport with him again from the beginning of 2012.

“At a certain point it seemed that we could not stay here,” Fernando said, looking back at the lengthy process. “But we could. We just needed to work to fulfil all the requirements.”

After the residency issue was settled, it was time to move his life forward and find a job.

Initially Fernando considered setting up a language school but instead he decided to look for a job in an international company. However, his inability to speak Slovak limited his choices as many potential employers required proficiency in the local language.

Based on research conducted by the Institute for Public Affairs in 2010-2011 entitled Economic Aspects of Migration and Integration of Third-Country Nationals in Slovakia, the language barrier faced by migrants in the Slovak labour market presents a serious obstacle to 27 percent of those surveyed and they were unable to find a job suited to their qualifications.

His lack of Slovak skills also had an impact on Fernando’s personal life because his wife’s parents do not speak English. Enrolment in a language course is one of Fernando’s New Year’s resolutions that he hopes will help him in future years.

“Even though I deal in English most of my day because of my work, I still think it is very important for me to actually be able to communicate with people,” he admitted. “I feel like I am missing something.”

Living among the Slovaks

Although Fernando has not completely discarded his plans to launch his own business, for now he is concentrating on getting used to the transition and the new culture. He enjoys his new life, explores the country and welcomes new opportunities – even though he really misses Guatemalan food.

Fernando’s friends are mainly Slovaks. Only a few Guatemalans live in Slovakia and even though Fernando has heard of one, he has never met him. The Latin American community in Slovakia is not large and since he sees them only occasionally he mainly mingles with Slovaks.

Maintaining Guatemalan traditions at all costs is not too important for him as he believes what really matters is spending time with his family. Living outside Guatemala has taught him to be more flexible and to have more understanding. He said every culture has its own beauty, one just needs to be open-minded and to look at things with a positive perspective.

“The migrant’s decision about their country of destination is in large part influenced by the existence of a foreign community and acceptance by the locals,” said Zuzana Vatráľová, head of the IOM Office in Slovakia. “It is important that they are accepted and allowed to integrate into society. Otherwise the country can lose skilful and qualified people. If we create the right conditions for migrants, they will stay.”

The author wrote this article as an intern at IOM, the International Organization for Migration, at its office in Slovakia.