Slovakia 'is warming up'

IN EARLY June a flash flood swept through several villages lying just below Červený Kameň castle in the Small Carpathians hitting the village of Píla the hardest. The massive flood wave took the residents by total surprise as it came after a fairly brief thunderstorm in the mountains. Nevertheless the flood wave caused millions of euros in damage to state, municipal and private property. 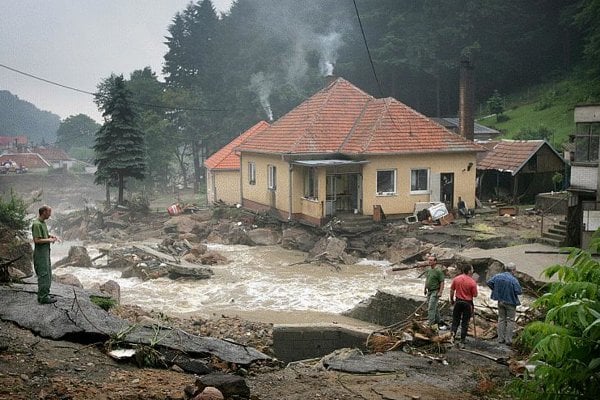 IN EARLY June a flash flood swept through several villages lying just below Červený Kameň castle in the Small Carpathians hitting the village of Píla the hardest. The massive flood wave took the residents by total surprise as it came after a fairly brief thunderstorm in the mountains. Nevertheless the flood wave caused millions of euros in damage to state, municipal and private property.

Experts believe that this kind of flash flood is one of the consequences of global climate change and warn that Slovakia should prepare itself for more extreme weather to come.

A project prepared by the Slovak Hydro-Meteorological Institute (SHMÚ) entitled Consequences of Climate Change and Potential Adaptation Measures in Individual Sectors of Slovakia presented at a recent conference presents ways to mitigate the impacts of climate change and recommends various steps the country should pursue.

“Climate changes are responding to global warming with a certain slip in time,” said József Nagy, Minister of Environment at the conference where the project was presented. “However, sooner or later they will be mirrored in the weather and thus it is necessary to act. Some impacts of climate change we can already see in Slovakia.”

Nagy cited calculations made by the Economic Institute of the Slovak Academy of Sciences indicating that Slovakia should allocate between €19 billion and €36 billion up to 2050 to mitigate the impacts of climate change and noted that this is only a small portion of the damage that might occur if the country is not prepared.

Pavol Nejedlík, the general director of the SHMÚ, stated that climate change is a known fact while the extent to which humans are contributing to it is under debate, adding that while there are natural climate cycles humans have started to interfere with nature to such an extent that their footprint is now visible in terms of global warming.

Nejedlík added that humans should focus on reducing emissions of greenhouse gases and take adaptive measures, noting that the European Union has already published a Green Book as well as a White Book dealing with concrete measures and will release a new adaptation strategy in 2013.

The project coordinated by the SHMÚ is Slovakia’s response to climate change challenges and it seeks to give an integrated overview of the current situation in Slovakia and the kinds of adaptive measures that should be pursued. The project, which has cost €166,000, started in 2009 and its main goals have been to prepare a comprehensive evaluation of the consequences of climate change in Slovakia and to recommend adaptive measures that can serve as the basis for a national strategy as well as to elaborate plans at community levels.

Nejedlík explained that the study was constructed based on recorded data such as increases in average temperatures, a change in precipitation patterns and measurable extremes in the weather.

“These are things that are recorded and then affect specific sectors differently,” Nejedlík said, specifying that the SHMÚ has defined eight sectors and used various indicators to assess the impacts of climate change on each sector. “For example, the less frequent occurrence of a snow layer in lowlands will have a different impact on tourism than it will on the health of the population.”

Slovakia is getting warmer as a consequence of climate change, say Slovak climate experts. Moreover, the frequency of flash floods or long-lasting droughts has been increasing while these phenomena have been experienced in localities where they had not occurred before. The experts also warned that Slovakia could expect tornados and noted that temperature extremes are becoming more common during the summer as well as in winter months.

A temperature of over 40 degrees Celsius was registered for the first time in Slovakia in 2007 when Dudince recorded 40.2 degrees and Hurbanovo recorded 40.3 degrees, the report states, adding that based on long-term records, the coldest winter in Hurbanovo was in 1890-1891 and the warmest winter was in 2006-2007.

Nejedlík told the public-service STV that in less than 100 years, the average temperature in Slovakia has increased roughly between 1.1 and 1.4 degrees Celsius, adding that an increase of 3 to 4 degrees Celsius will mean that the climate in Žilina will be like the current climate in Komárno.

Climatologist Pavol Faško said he expects average temperatures in Slovakia to be warmer in coming years.

“The climate in Slovakia will have the character of the climate that is currently typical for northern regions of the Balkans,” Faško stated. “This stems from the fact that we are now already registering a kind of move in climatic ranges to higher latitudes. And because Slovakia is a landlocked country ... the climate will have a character in the future similar to what is now in northern Serbia, Bulgaria, Croatia or southern Hungary.”

Faško also predicts that Slovakia will experience more and longer heat waves in the future, adding that without proximity to a sea heat waves lasting more than 10 days in a row could be more frequent.

The SHMÚ predicts that towns located primarily in southern and south-western Slovakia will see an increase in the number of tropical summer days, defined as days with a high temperature of over 30 degrees Celsius, adding that even though this may shorten the winter heating season it will make the summer months less comfortable and lead to an increase in the use of air-conditioning and higher electricity consumption.

In the area of health care and prevention of diseases, experts caution that a warmer climate could mean more frequent outbreaks of diseases such as salmonella and encephalitis, or even exotic diseases such as malaria. Katarína Halzlová from the Office of Public Health told the conference that people should not be extremely frightened but they should be informed and prepared. She added, however, that extreme heat waves cause serious health problems among older people, those with illnesses, and children.

“From June to September 2003, when temperatures climbed to over 40 degrees Celsius, 70,000 people died in Europe,” Halzlová stated, adding that Slovakia does not currently have statistics on heat-related deaths.

The SHMÚ experts predict that conditions may improve for summer holiday-making in Slovakia but that ski resorts with lower elevations up to 800 metres might have problems making snow or keeping natural snow in the winter months. In the transport sector, the report notes that the main risk of extreme weather is the possibility of damage to transport infrastructure.

Parts of the report deal with the possibility that climate change might also cause less biodiversity in the country, noting that sensitive species might be greatly affected.

Because of Slovakia’s extensive water resources, the SHMÚ experts do not predict any significant problem with available drinking water.

Because it is not possible to build flood protection across the entire country, even though Slovakia is working on the most susceptible areas, it is crucial to have a reliable flood warning system that can reduce potential damage. POVAPSYS is Slovakia’s flood forecasting and warning system, managed by the SHMÚ, and it is able to forecast flash floods with high probability some hours before they strike in order to save lives and protect at least movable property. The SHMÚ wants to complete the POVAPSYS system and also improve it and the Environment Ministry says the project is important.

“Completion of POVAPSYS is one of the priorities of the ministry,” Nagy stated, adding that the conceptual phase is complete.

Nejedlík of the SHMÚ specified that the system’s network of sensors should become denser in order to improve the system.

“Currently we operate two radars in Slovakia and one is obsolete,” Nejedlík told The Slovak Spectator, adding that radar is of critical importance to detect levels of precipitation. “Within the second phase [of completion of POVAPSYS] we plan to replace one radar tower and buy another one to install at Kubínska Hoľa. We also plan to extend the network of automatic weather stations monitoring precipitation, temperature and other weather variables.”

The second phase of POVAPSYS is expected to be financed from EU structural funds and €20 million has already been allocated for this phase under Slovakia’s Operational Programme Environment. Nejedlík told The Slovak Spectator that the second phase should soon begin with a call promulgated by the Environment Ministry and that the SHMÚ is prepared to respond quickly and submit an application to get project funds.

The Environment Ministry also said the increased occurrence of landslides in Slovakia requires development of a conceptual solution. Several landslides occurred after heavy rains in 2010, particularly in eastern Slovakia, including a very damaging landslide in Nižná Myšľa.

The ministry has prepared a list of about 30 localities that are endangered by potential landslides and has allocated €5 million for the first phase of remedial work.