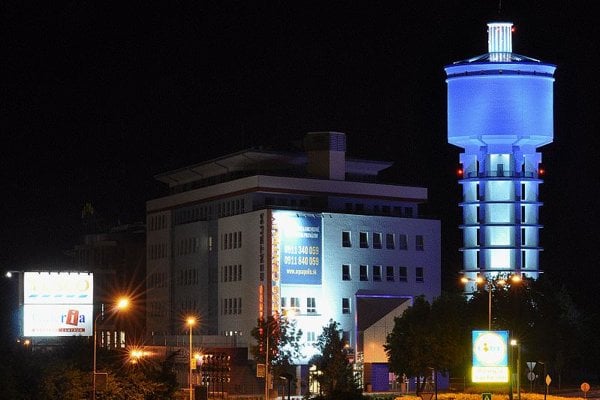 
The tall, 50-metre water tower building that looms over Trnava, is now illuminated. The Trnava Water Company – TAVOS – finished the work required for the night-time lighting of this well-known structure by architect Emil Belluš, which is a national technological monument, in May.

Illumination of the water tower concluded renovations begun in 2010 that modified the building’s exterior and changed the colour of its façade. Eight lamps illuminate the water tower from four locations beneath the structure and the effect is augmented by additional lighting inside.

“We will use white light to illuminate the tower but the intention is to light the water tank itself with a blue shade,” Marek Gálik, the head of TAVOS, told the trnava-live.sk website before the new lights were switched on.

Several tourist sites in Trnava, such as the town’s tower, St John the Baptist Cathedral and the Dome of St Nicholas, have been lit up at night for several years.

Construction of the Vodáreň (Water Tower) started in the 1940s and it was put into operation in 1954. It holds 1,200 cubic metres of water in its eight-metre-high tank. For the first time in 50 years, the tower was made accessible to the public last year and residents discovered a beautiful view of the whole town from its top.

Belluš, the tower’s designer, was also responsible for the famous Colonnade Bridge in Piešťany.