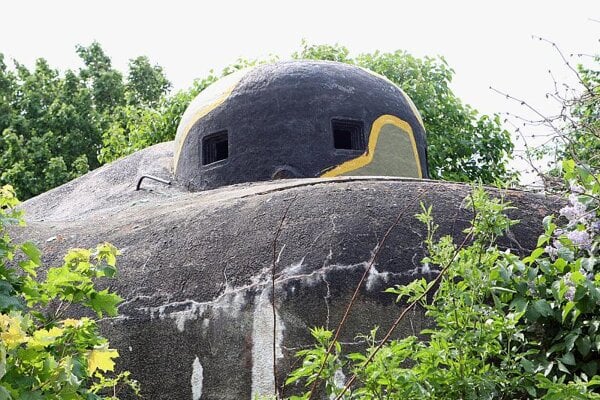 One of the bunkers peeks out amid trees near the Austrian border. (Source: Sme- Pavol Funtál)
Font size:A-|A+0


RIDE on historical pre-World War II bicycles around army trenches and bunkers that were part of the defensive fortification of Petržalka, across the Danube from old-town Bratislava, was a unique event for the Bratislavans who participated. On July 9 and again on July 16, people could take part in this event, organised on the 73rd anniversary of the city’s mobilisation in 1938. An important part of the Czechoslovak army in 1937-1938 was a cycling battalion that was determined to defend its homeland.

The event called Plná poľná na bicykloch (With Kitbags on Bicycles) had the goal of bringing together support for safe cycling, opening a new cycling route, introducing an educational path along the former Iron Curtain, highlighting the war bunkers facing the Danube, and bringing more attention to the cycling route coming from Záhorie that connects to an international cycling route in Austria as well as on to Hungary via Kopčianska Street in Petržalka.

The event also served as a guided tour to some lesser-known historical sites in Bratislava. Billed as “Knowledge about Our Military Past” the guides provided detailed information about the bunkers, as well as the historical cemetery near to one of the bunkers that holds the remains of soldiers from World War I.

There were several cycling routes available on each weekend and participants could choose the best one for their skills and interests according to the length and primary motif.

The ‘sweetest route’ on both weekends led to the chocolate factory in Kittsee. On July 9, the convoy of cyclists was accompanied by Slovak soldiers riding in historical battle vehicles.

Anyone who likes military history and cycling can become a member of the club, the SITA newswire wrote.