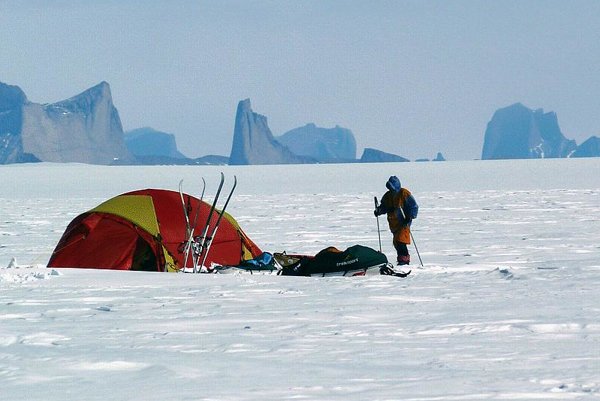 
AFTER marching 200 kilometres on skis through the Antarctic environment, four Slovak polar explorers reached the South Pole in early December. Peter Valušiak, Róbert Kukučka, Patrik Tkáč and Pavol Barabáš had to contend with – among other things – temperatures around minus 40°C that are typical for the beginning of Arctic summer, said Hana Vítková of the K2 Studio to the TASR newswire.

She added that the explorers’ travel was made more difficult by huge snowdrifts and the high altitude – 3,300 metres above sea level.

The men were the first Slovak expedition to the South Pole in 2010. They flew to the Novolazarevskaya polar base in early November and acclimatised themselves with ascents in Queen Maud Land, characterised for its sharp rock formations which pierce the Antarctic ice sheets.

“We managed to travel to the Antarctic thanks to good contacts with Russian polar explorers that were established two years ago during my solo attempt at a Trans-Antarctic crossing,” said expedition leader Valušiak. He added that even though the sun really never vanishes from the horizon at this time of year in Antarctica, the group had to adapt to the very low temperatures.


“Each of us had reached the very end of his tether. The snow literally sucked the strength out of us. The heavy sleighs made travel through the snowdrifts difficult. One could not just change a sweaty t-shirt for a dry one, as it would have frozen. We had to dry our t-shirts while wearing them during sleep,” said Patrik Tkáč, a financier and marathon runner.

The Slovak polar group came together during a ski crossing to the North Pole in 2008 using the route called the Messner variation.

“I thought this march would be easier when compared to the Arctic where frost was combined with 100-percent humidity, but in the last part, close to the South Pole, the altitude complicated the conditions, and this combination shook us all,” Kukučka stated.

The expedition had the opportunity to witness a huge colony of Emperor Penguins.

“There were thousands of them; they were absolutely not afraid. Males guarded their offspring that were three months old while females roamed dozens of kilometres towards the sea to search for food,” said Barabáš, who was the cameraman for the expedition.