The Slovak who made fish fly

DO YOU think fish cannot fly? Ladislav Guderna, the world-renown surrealistic painter of Slovak origin, might persuade you to the contrary when you visit the Bratislava City Gallery’s exhibition of the artist’s oeuvre called Flying Fish, the Magical World of Ladislav Guderna. 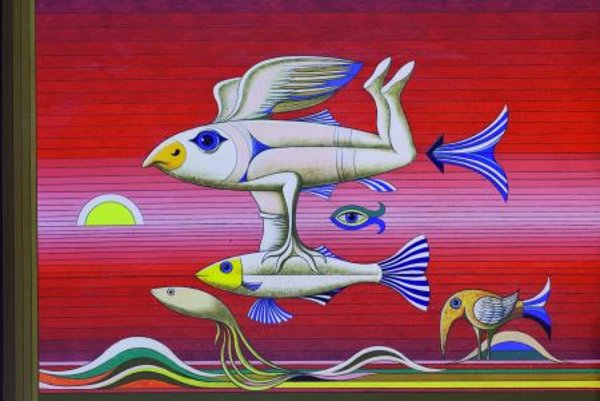 DO YOU think fish cannot fly? Ladislav Guderna, the world-renown surrealistic painter of Slovak origin, might persuade you to the contrary when you visit the Bratislava City Gallery’s exhibition of the artist’s oeuvre called Flying Fish, the Magical World of Ladislav Guderna.

“Surrealists perceive our world in a different way and in their world it is completely possible that fish can fly or that a bird can live underwater – very surprising realities,” Zsófia Kiss-Szemán, the curator of the exhibition, told The Slovak Spectator. “This is why I gave the exhibition the name Flying Fish.”

Fish were a motif that Guderna constantly returned to during his career but it was only later that his fish began to fly.

“It was characteristic for surrealists that everything can fly,” noted Kiss-Szemán, adding that “levitating objects are actually symbols of an entirely free spirit”.

The Flying Fish exhibition is the 12th art show offered as part of the Henkel company’s “Henkel Slovensko to Slovakia” programme, which presents significant artists who wandered away from Slovakia for various reasons: artists who were either born in Slovakia or who have roots here and became noted global artists, such as Andy Warhol, Dežo Hoffmann, Koloman Sokol, Arthur Fleischmann, Ján Zoričák and others. Many of these artists were forgotten in Slovakia because they had fled the country to escape the totalitarian regime and their works were prohibited from being shown here or being officially recognised.

This was the case with Guderna, who emigrated from Czechoslovakia in 1968 in protest against the occupying Warsaw Pact troops and went first to Austria and then to Canada. Kiss-Szemán stressed that when Guderna left at age 47 he was already an established artist with many achievements in his homeland as well as abroad and that after he left he actually had to build a new world for himself.

“Guderna was able to live in his inner world and this fills the canvasses presented at the exhibition,” said Kiss-Szemán. “Because he left in 1968 he was forgotten and forbidden here. It was impossible to exhibit his works and maybe that is why he was a bit forgotten here.”

This changed after the fall of communism in 1989. Guderna’s works have been shown at the Slovak National Gallery but art lovers have had to wait until now to see a solo exhibition of his art.

“It is the first time that his works have been exhibited to such an extent,” said Kiss-Szemán, adding that the gallery has also published a book about Guderna’s oeuvre to mark the occasion.

The exhibition, marking the artist’s 90th birthday, presents 130 works from private collections and public galleries; several of them have come directly from Canada. The exhibition covers all phases of Guderna’s life’s work such as his designs for stamps, mail art (also known as postal art or correspondence art) and magazines he published. The book, with text in Slovak and English, presents 420 works in all.

“This is an exhibition by a world-renowned artist that is attested to by the fact that collectors from China, Hong Kong, Paris and London came to Bratislava to attend the opening,” said Ivan Jančár, the director of the Bratislava City Gallery.

An imaginary world of metaphors

Guderna’s earliest works are characterised by heavy black contouring and glowing colours influenced by expressionism and works done by his teacher, Ján Mudroch. Later Guderna found inspiration in Pablo Picasso and turned to Cubism. When the sixties brought a loosening in the political atmosphere in Czechoslovakia, Guderna moved towards surrealist depictions. But he fully developed his credentials in surrealism only later in Canada, where he became an active member of two groups: the West Coast Surrealists and the Melmoth Vancouver Group.

Stamps and mail art are an inseparable part of Guderna’s oeuvre as he perceived communication as very important. In addition to his mail art, Guderna communicated via magazines and published a magazine called Scarabeus along with his son Martin and also served as the art director of the Melmoth Vancouver magazine.

The exhibition brings a number of Guderna’s iconic works to Bratislava, ones symbolising his complete oeuvre, such as Coincidence, which Kiss-Szemán writes in the book on Guderna’s universe is as “beautiful as the chance encounter of a sewing machine and an umbrella on a dissecting table” or the work named Dialogue that depicts two human heads, one with a fish, in which the language from the fish/head is translated via a bugle into the ear of the other head.

“Dialogue is a very beautiful painting,” said Kiss-Szemán, noting its motif of communication. “Here you can see three important aspects of Guderna’s work”, she continued, noting that these are humour and communication along with refinement and technical preciseness, noting that Guderna often destroyed his drafts because he did not regard them as perfect. For that reason very few of his drafts have been preserved. Eroticism is another characteristic aspect of Guderna’s works, according to Kiss-Szemán.

The exhibition, open until January 22, also presents a selection of women’s heads and imaginative landscapes as well as the last work by Guderna, finished one day before his death, with the assistance of his son, which synthesises all of the artist’s important motifs, principles and characteristic elements.

Kiss-Szemán writes in the book that another remarkable phenomenon in Guderna’s work was his compulsion to return to particular motifs over and over again, often through all his periods, as well as his desire to reinterpret individual works by creating differing variants or a series of paintings, often using different techniques or sizes.

Guderna focused his work on an imaginary world full of metaphors that conveyed harmony, beauty and enjoyment of life, Kiss-Szemán said, adding that “the way in which Guderna perceived things around him is unrepeatable”.