Polls predict no clear outcome yet

WITH only around 60 days to go until the general election on March 10, political opinion polls are now among the most closely watched news events. However, the latest poll results have left pundits unwilling to proffer any bold predictions about the outcome of the parliamentary elections. 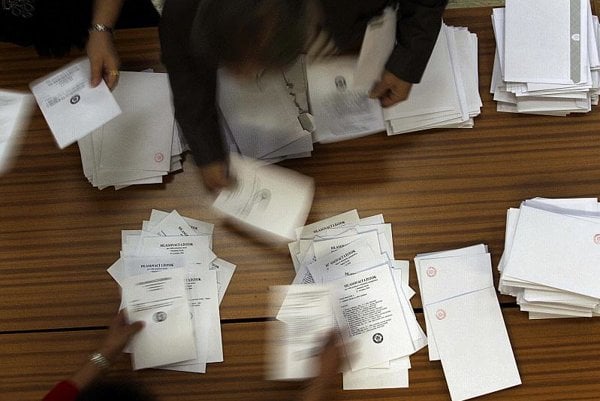 WITH only around 60 days to go until the general election on March 10, political opinion polls are now among the most closely watched news events. However, the latest poll results have left pundits unwilling to proffer any bold predictions about the outcome of the parliamentary elections.

One of the only observations they feel capable of making is that scandals which cast doubt on the behaviour of politicians could discourage voters of all stripes from voting and thus depress the 2012 turnout.

The publication of the so-called Gorilla file, which purports to describe an operation conducted by the SIS intelligence agency that uncovered alleged widespread political corruption in 2005-2006, could have a more negative impact on potential support for the centre-right parties, according to Martin Slosiarik, head of the Focus polling agency. This is because transparency and corruption-free government were among the issues that these parties campaigned on in the 2010 elections. Some of the same centre-right parties were in power in 2005-2006.

Ján Baránek of the Polis polling agency agreed, suggesting that if the Gorilla scandal continues to unfold it might hurt the largest centre-right party, the Slovak Democratic and Christian Union (SDKÚ).

The most recent Polis poll, which surveyed 1,226 respondents, showed the SDKÚ, led by Mikuláš Dzurinda (who was prime minister in 2005-2006) scoring 9.6 percent. But that poll was conducted between December 16 and 23, before the Gorilla story had attracted full media attention.

The poll shows that around half of the seats in the Slovak Parliament would be won by Robert Fico’s Smer party, currently in opposition, which attracted the support of 40.2 percent of respondents.

Another poll, conducted by the Focus polling agency in early December 2011, showed Smer on an even stronger 43.9 percent approval rating, followed by the SDKÚ with 10.2 percent.

According to the Polis poll, the Christian Democratic Movement (KDH) would attract 8.7 percent of the votes; Focus showed the party on 10 percent.

According to Polis, the opposition Slovak National Party (SNS) would get 5.7 percent, while Igor Matovič’s Ordinary People and Independent Personalities (OĽ) party was backed by 4.1 percent of respondents, meaning that in the election it might fail to win any seats in parliament because of the 5-percent threshold rule.

Vladimír Mečiar’s Movement for a Democratic Slovakia (HZDS) and the Hungarian Coalition Party (SMK) also polled below the 5 percent threshold.

How support will change over the next few weeks is difficult to predict because of the Gorilla case, Baránek told The Slovak Spectator. He does not expect the affair to harm Smer, even though Robert Fico’s party and Fico himself are mentioned in the file.

“Smer voters might be more tolerant towards such matters,” Baránek said.

According to Slosiarik, the SDKÚ and SaS might face the biggest challenge repeating their election performances from 2010.

“It is precisely the voters of these parties from 2010 who have been displaying higher-than-average uncertainty in their electoral behaviour with regard to the upcoming parliamentary elections,” Slosiarik told The Slovak Spectator. “At the moment they do not know for whom they will vote, or else their disappointment with politics has reached the level at which they have decided not to cast their ballots.”

In contrast, Slosiarik said, Smer might perform better than in the last parliamentary elections, while other parliamentary parties’ results will probably differ little from their performance in 2010.

As for the newcomers, Igor Matovič’s OĽ has not achieved much beyond creating a big noise and crowding the party slate with a raft of apparently incompatible personalities, Baránek said. He noted that another party, the newly minted 99 Percent – Civic Voice party, had started its election campaign early.

Nonetheless, Baránek sees OĽ as having the biggest electoral potential of the two, but does not rule out 99 Percent scoring some points, as both parties have dedicated a great deal of their agendas to the Gorilla case, the Sme daily reported.

Which parties would benefit from a low turnout?

Only 49.7 percent of those polled say they will actually vote, according to Polis.


Baránek expects a lower turnout than at the last parliamentary elections, when 58.83 percent of voters cast a ballot.

“Unless something substantial happens or someone comes up with a highly motivating campaign or message, the turnout will be lower,” Baránek said. “Lower turnout might benefit parties with a stable core of voters, such as the KDH or Most-Híd, to a certain degree.”

Experience from previous elections suggests that undecided voters tend to make their choices in the last month before election day, Slosiarik said.

“However, I think that in the upcoming elections one cannot expect turnout much above 50 percent,” said Slosiarik, adding that a lower turnout will benefit Smer or, among the centre-right parties, the KDH.