WHILE shocking images from Japan’s Fukushima nuclear power plant, which suffered multiple meltdowns after being hit by an earthquake and subsequent tsunami last March, have now disappeared from the front pages, the effects of the disaster are still being felt in Europe. Slovakia’s Nuclear Regulatory Authority (ÚJD), like counterpart organisations across the EU, sent its final national report on the stress tests for the nuclear power plants in Slovakia to Brussels by the deadline of December 31. 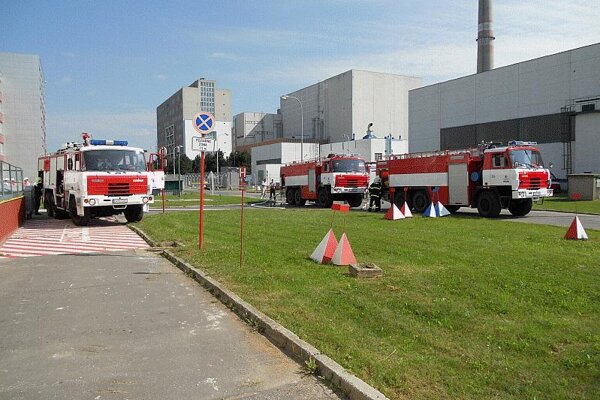 Testing the supply of water by fire engines at a Slovak nuclear power plant. (Source: Courtesy of ÚJD)
Font size:A-|A+0

WHILE shocking images from Japan’s Fukushima nuclear power plant, which suffered multiple meltdowns after being hit by an earthquake and subsequent tsunami last March, have now disappeared from the front pages, the effects of the disaster are still being felt in Europe. Slovakia’s Nuclear Regulatory Authority (ÚJD), like counterpart organisations across the EU, sent its final national report on the stress tests for the nuclear power plants in Slovakia to Brussels by the deadline of December 31.

The ÚJD concluded that the stress tests had confirmed the extra safety margins required of nuclear power stations in Slovakia, and that no deficiencies were identified that would question the ongoing safe operation of the four existing units or the continued construction of new units.

“The ÚJD has not identified any shortcoming which would require any prompt action,” Marta Žiaková, chair of the ÚJD, said on January 3 as she presented the results of the nuclear power plant stress tests. “Plant design of nuclear power stations in Slovakia is robust, meaning that … in the event of a combination of external events these nuclear power stations are able to cope with such an event or to provide the operator with enough time to intervene.”

In response, the environmental group Greenpeace Slovensko described the stress tests as only an exercise on paper designed to calm the public and not as an effort to determine the real safety of nuclear reactors across the European Union. It called the ÚJD report a paper for paper’s sake.

Greenpeace Slovensko expressed dissatisfaction with the design of the stress tests, stating that they fail to address a number of issues.

“Stress tests of the proposed design serve to calm the public rather than really prove the safety of nuclear power stations in the EU,” Andrea Zlatňanská, climate and energy campaigner at Greenpeace Slovensko, told The Slovak Spectator. “Since the very beginning of the reports’ creation we have found that much information is missing.”

Greenpeace Slovensko said specification of what the stress tests should have examined was lacking, for instance checking whether the existing accident and evacuation plans to protect the population, which in Japan were shown to be insufficient, are adequate. Greenpeace Slovensko regards such plans of key importance if an accident occurs. It also regards as crucial the issue of whether individual countries have at their disposal enough expert workers, liquidators, volunteers and rescuers to be able to protect and evacuate the civilian population under conditions of ongoing catastrophe, be it war or natural disaster.

“It is of the key importance, in order to find out the safety level of reactors, that also an analysis of an accident of several reactors concurrently linked with a failure of the infrastructure as well with a natural or other catastrophe is included,” said Zlatňanská, adding that this is exactly what happened in Fukushima. Greenpeace Slovensko said such information was missing from the interim report about the stress tests in Slovakia, delivered in mid September, and that it is currently analysing the results of the final national report.

According to Greenpeace Slovensko, the reports do not answer a number of safety questions at all and are only papers which were seen as necessary to create.

“It is interesting that, according to the reports, everything in Slovakia is all right in the nuclear power stations,” said Zlatňanská. “But in other countries they approached the stress tests with a more critical view. For example, in France the local authority, as early as the first phases of the tests, declared that it was necessary to improve safety in each of the country’s 58 reactors, and to invest billions of euros.”

In response to the disaster in Japan, the operators of nuclear plants within the EU were required to undertake comprehensive risk and safety assessments under the supervision of their national regulatory authorities. In Slovakia, the tests were performed by Slovenské Elektrárne (SE), the operator of the nuclear power plants in Jaslovské Bohunice and Mochovce, under the supervision of the ÚJD. In mid September the authority delivered to the European Commission its interim national report on stress tests of the country’s nuclear power plants, and then the final report on December 31.

Peter Uhrík, chief executive of the ÚJD, explained that since the beginning of their operation the nuclear units in Slovakia have been subject to systematic safety assessment and upgrading in accordance with Slovak national legislation and international standards. Currently, all nuclear plants in Slovakia are subject to periodic safety reviews (PSRs) every 10 years.

The latest review at the Jaslovské Bohunice facility was completed in 2008 and at the Mochovce facility in 2009. The operational permits issued were linked to approval of a programme of safety upgrades at the plants intended to ensure closer compliance of their safety levels with contemporary safety standards. Uhrík added that the safety upgrade programmes, which were launched before the disaster in Fukushima, were already addressing areas assessed under the stress tests.

Uhrík pointed out that as part of the stress tests the safety level of nuclear power plants in Slovakia was judged for potential hazards beyond the legislative requirements, and that these tests were completely satisfied. Their aim was to assess particular events which were not assessed in the original projects for the plants because, for example, the legislation at the time did not require this.

The ÚJD regards the newly assessed safety margins as a positive feature, providing the opportunity to further improve the safety of Slovakia’s nuclear power plants. Uhrík said that the stress tests, given that they came in response to the disaster in Fukushima, were focused on earthquakes, flooding, extreme meteorological conditions, loss of electric power and loss of ultimate heat sink.

Uhrík said that even though neither Slovakia nor the surrounding region contain tectonic features which could cause extremely strong earthquakes comparable to the one in Japan, seismic activity is an issue which was seriously considered in the design, operation and safety upgrading of Slovakia’s nuclear power plants.

In terms of flooding, the only meaningful source of potential flooding at the Slovak sites is extreme meteorological conditions. In this respect the Mochovce plant demonstrated large margins, and in the case of Jaslovské Bohunice an adequate temporary solution has been implemented and permanent protection is in its pre-design stage.

A large portion of the report deals with the possible effects of a loss of electrical power. Here Uhrík specified that in both sites there are eight different options for providing power supply to the plant itself; five of these options are independent of the electricity distribution grid.

A decision to install additional diesel generators dedicated to the management of severe accidents had already been made as a result of the PSRs that took place before the Fukushima accident, and implementation is currently in progress. In addition, mobile diesel generators for recharging batteries in the event of a long black-out and loss of all other AC power sources are being procured.

Development and implementation of the accident management programme, including mitigation of severe accidents, has been an ongoing process in all nuclear units in Slovakia independent of the Fukushima accident, the ÚJD writes in the general conclusion of its final report. In addition to existing studies, and taking into account the limited time allowed for the stress tests, the ÚJD will ask for a further systematic and comprehensive assessment of the plants' resistance to station blackout and loss of ultimate heat sink taking into account measures to increase the robustness of the plants. Similarly, the adequacy of available analyses of the progression of severe accidents should be assessed. In particular, occurrence of severe accidents in parallel at several reactors (up to all of them) in any given site under conditions of severely damaged area infrastructure should be considered.

The process of stress testing, in which 16 national nuclear regulators (including those of Switzerland and Ukraine) conducted stress tests on each of their nuclear power plants, does not end with delivery of the final national reports on December 31, 2011, the European Nuclear Safety Regulators’ Group (ENSREG) states on its website.

Now, the final national reports, which are public and available for comment by experts and the general public, will be subject to a peer-review process conducted by experts from other member states.

Uhrík specified that Slovakia will present its national report in Luxembourg on February 9 and 10. Then a country team led by a representative from Germany will arrive in Slovakia in March. The aim of this process is to check the way in which the stress tests were conducted in Slovakia and whether the findings and conclusions of the national report correspond with the actual situation.

Uhrík specified that the attention of the ÚJD would now focus on safety measures already carried out in other European countries that operate nuclear power plants, as well as on the findings and conclusions of the ÚJD’s counterpart organisations in these countries.

“I will very closely watch what emerges from the reports of the other countries, i.e. what could be utilised in Slovakia,” Uhrík said. “We will look in particular at the reports of Finland, the Czech Republic, Hungary and maybe Bulgaria, because these [countries] operate the same or similar types of reactors.”

The European Commission will present the final results of the stress tests to the European Council at a meeting scheduled for June 2012, according to ENSREG. Final conclusions and proposals for improvements will then be drawn up and proposed.

Žiaková pointed out that nuclear safety is a national responsibility and that the EU is proceeding in a harmonised way.