FAIRS and exhibitions are organised to show or trade products and services and to make new business contacts. In general they are temporary, but there are some exceptions. One of them is the Slovak National Collection of Wine (NSV) in Pezinok, which offers the best 100 Slovak wines, drawn from the winners of selected competitions nationwide. The collection, which changes each year, is housed in historical wine cellars in the town of Pezinok, near Bratislava, and offers all its wines for tasting. 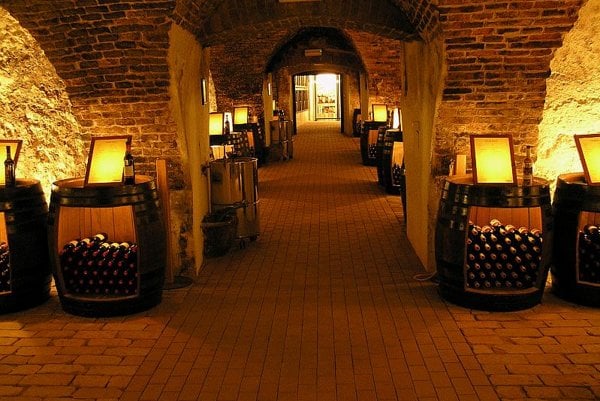 FAIRS and exhibitions are organised to show or trade products and services and to make new business contacts. In general they are temporary, but there are some exceptions. One of them is the Slovak National Collection of Wine (NSV) in Pezinok, which offers the best 100 Slovak wines, drawn from the winners of selected competitions nationwide. The collection, which changes each year, is housed in historical wine cellars in the town of Pezinok, near Bratislava, and offers all its wines for tasting.

“The idea of launching the Slovak National Collection of Wine did not originate solely in the minds of Slovak winemakers in 2006, when the place was opened,” Ľudmila Miškovičová, manager of the NSV, explained to The Slovak Spectator. “This is a project with a long tradition in neighbouring countries like the Czech Republic, Austria and Hungary. The main aim of the NSV is to present, in one place, the best Slovak wines, Slovak viniculture, its tradition and history.”

Pezinok was selected as the site of the NSV because of its long history as a place where wine has been grown and produced. The 700-year-old vaulted cellars of Pezinok Castle were chosen to house the unique collection.

The 100 best wines are selected each year during a final competition to which wines are nominated from a series of qualifying contests. The final competition is organised by the Grape and Wine Union of Slovakia. Last year the competition, the sixth so far, was held in late June, after which the Slovak National Collection of Wine for 2011 was ceremonially inaugurated and the wines made available at the NSV in Pezinok for tasting and sale on September 6, 2011, according to Miškovičová.

To qualify for the final competition wines must be produced in Slovakia from grapes that were also grown here. Each wine must also collect at least 84 competition points, as well as meet a range of other requirements.

Detailing the current wine collection at the NSV, Miškovičová said that the sixth competition was very specific in terms of the wines chosen. This was because 2010 was quite a difficult year for vintners due to the unfavourable weather in Slovakia. But Slovak winemakers demonstrated their abilities and produced some very interesting wines, which still made it into the current collection. White wines are characterised by freshness, and mineral and aromatic qualities. But the high number of red wines selected for the collection, as many as 55, was a big surprise. Most of these come from 2009, according to Miškovičová, who adds that visitors can this year taste more mature red wines at the NSV.

The NSV offers several degustation programmes of which the ‘free degustation’, which allows visitors to taste any of the exhibited wines within a period of 90 minutes, is the most popular, Miškovičová said. Bigger groups, mostly organised by travel agencies, prefer smaller degustation programmes that also include a presentation by one of the NSV’s sommeliers, and which are also available in English.

With regards to the wines that visitors prefer, Miškovičová named dry whites, as Slovakia is still regarded as primarily a white-wine country. The most popular varieties are Rizling rýnsky, Rulandské šedé (Pinot gris) and aromatic Tramín červený. In the case of red wines, the most sought-after varieties are Frankovka, Cabernet sauvignon, Rulandské modré (Pinot noir) and Merlot. Rosé is also becoming more and more popular and Miškovičová sees huge potential for this type of wine in Slovakia.

Another interesting group of highly sought-after wines are those produced from new Slovak varieties. These include white Devín and red Dunaj in particular, but Miškovičová also mentions red Hron, Nitra and Váh, which are also, for the first time, represented in the current collection.

The NSV has been registering an increasing number of visitors from abroad. These now make up more than half of all visitors. Most of them come from the Czech Republic, Austria, Poland, Russia and Hungary, but an increasing number also arrive from Scandinavia and Great Britain.

Miškovičová regards wine competitions as the simplest way for winemakers to attract the attention of potential purchasers. They can also compare their wines with those of other winemakers.

“Slovak winemakers realise very well the prestige which the placing of their wines in the NSV collection offers,” said Miškovičová, adding that apart from a year-long presentation in the NSV itself, the selection brings media coverage.

“The idea of choosing and drawing attention to better wines is a guarantee that consumers will focus more on quality wine,” Miškovičová hopes. “And thus one day people will not select wines from the shelves of supermarkets solely according to price, but start being interested in the origin of the wine, the variety from which it was produced, its quality category, its vintage or the prizes it has collected.”

Winemakers themselves perceive wine competitions as places where they can test and compare their products with others, and share experiences.

“Competing in any field of life moves you further,” Peter Kecskés, sommelier at wine producer Elesko, one of the winemakers to have several of its wines selected for the NSV’s current top 100, told The Slovak Spectator. “This is also true in wine making. If you cannot compare with anyone else, you see neither possible mistakes nor opportunities.”

According to Kecskés, in this way the culture of wine is developing, resulting in the growing quality of Slovak wines. Sound results in competitions also positively affect sales and the brand of the winemaker.

Milan Kakaš from Tokaj & Co of Malá Tŕňa sees the placing of a company's wines among the best 100 as a prestigious acknowledgement and indicator of quality, as well as a reflection of the attitude of his company towards the phenomenon of Tokaj wine. Tokaj & Co regularly gets its wines selected in the NSV collection and last year was no exception. Apart from this, the presentation of its wines in Pezinok has inspired a number of Slovak and foreign visitors to travel to eastern Slovakia to experience a degustation in the firm's tuff wine cellars, some of which date back to the 15th century, and get acquainted with its wine production techniques.

Kecskés of Elesko added that since the NSV has become more well-known among wine consumers, the wines selected for it are increasingly becoming opinion-formers. Since only the best wines are chosen from each category or variety, then a visit to the NSV also has an educational character, since a visitor can become acquainted with the proper ‘face’ of each wine.

NSV to go on tour?

Until now wine lovers have had to go to Pezinok to taste wines from this ultimate collection, but the NSV is pondering a ‘travelling’ collection with stops in regional capitals or popular tourist destinations, for example the High Tatras.

“Last year we organised for the first time a thematic tasting – the first theme was rosé,” said Miškovičová. “In the future we also plan to organise tasting of new Slovak varieties, Rizling wines or other popular wines.”