UNDERNEATH mainstream culture there often is a “stream below the stream” said filmmaker Martin Šulík when speaking about his brother’s most recent documentary film about Roma culture – and a set of Roma songs – called Neve giľa. Šulík specifically likened ‘Rom-pop music’ to the title of Slovak author Dušan Dušek’s short story Potok pod potokom (The Stream Below the Stream). 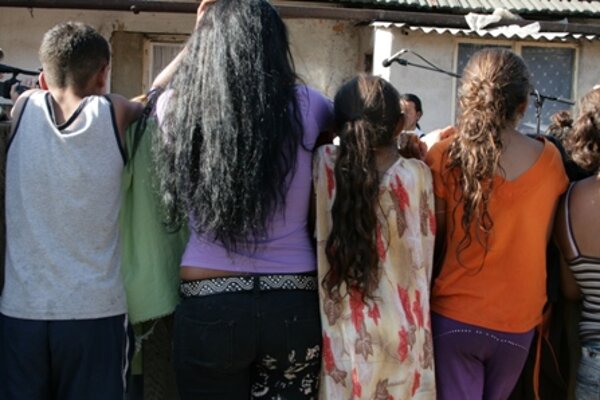 UNDERNEATH mainstream culture there often is a “stream below the stream” said filmmaker Martin Šulík when speaking about his brother’s most recent documentary film about Roma culture – and a set of Roma songs – called Neve giľa. Šulík specifically likened ‘Rom-pop music’ to the title of Slovak author Dušan Dušek’s short story Potok pod potokom (The Stream Below the Stream).

Neve giľa, or New Roma Songs, is a project initiated by Jana Belišová and its DVD/MP3 CD and songbook were “baptised” and released to the public shortly before Christmas. This is Belišová’s fifth project documenting Roma music and unlike her previous projects, which preserved old Roma songs – or phurikane giľa in Roma – her recent project recorded popular, contemporary songs that mushroomed in popularity in Roma communities.

Throughout 2009 and 2010, individuals associated with Belišová’s Žudro civic association travelled to about 80 Roma communities in Slovakia to record the popular music blooming in their villages and towns. Belišová’s team included Marek Šulík, Martin’s brother, who served as film editor and was also behind the camera - alternating with Jana Bučková - while the documentary about the recording project was filmed.

“The new Roma songs can be divided into ‘disco’ music meant for dancing and ‘slow schmaltz’ songs meant for listening. But there is also a division in the atmosphere of the songs and when analysing the lyrics we found that many more songs are those sad ones which resemble the ancient songs, Phurikane giľa,” Belišová told The Slovak Spectator.

“The old songs changed their melodies into schmaltz tunes but the essence remained the same. Another thing that struck me was that Rom-pop, although hard to define and very varied, was dominated by men – both as musicians and as singers. So it was energising and refreshing to find women singing and playing this genre,” Belišová said at the release of the CD on December 17 at the KC Dunaj culture hub in Bratislava. She also invited three of the women musicians, who she called “refreshments”, to play onstage as the Romka band. Excerpts from the documentary film were screened that evening as well.

“It is good that a songbook is included in the project,” Marek Šulík told The Slovak Spectator, “as in this way the majority population can also read the lyrics, understand them, and maybe also try to sing along.”

Šulík said that the project had fully occupied him for two years but that he was happy to have been part of it, saying that it was different from a typical documentary project that tries to analyse or understand something. He called it instead “a documenting project”.

He also spoke about the personal challenges he faced: “When on the road in this way, you are put in front of yourself, confronted with yourself, and suddenly you find that you have numerous prejudices, fears; so you are forced to explore yourself and find out when it is good to be afraid and when not. And the longer you work with Roma and the longer you keep going into their community, the more you come to like them and understand their problems, the problems often instilled by this majority society, and in the end you find out you have no solution at all.”

Belišová explained to The Slovak Spectator that her projects are a combination of her professional interests, as she is a university graduate in ethnography and music, as well as her personal past and her fascination with Roma culture and music.

“As a child, I used to go to my grandma’s village, Žehňa, and there were just a few non-Roma kids. The non-Roma kids were more interested in preserving cherries while the Roma children were more interested in plucking them. Of course, I befriended the Roma and I also noticed the beautiful music coming at night from their part of the village,” Belišová said. She added that as part of her university studies she sought to collect traditional folk songs from the Gemer region and found out that someone had already recorded almost all of the 400 songs she had laboriously collected.

But Belišová added there had been little systematic research of traditional Roma songs other than by Hungarian or Czech musicologists “so I applied for a grant from the Open Society Institute (currently the Open Society Foundation), was successful at the second shot, and started working. And then, somehow, one thing led to another, one project stemmed from the previous one”.

The Phurikane giľa project included a travel book or diary started by Zuzana Mojžišová and completed by Belišová, accompanied by photos by Daniela Rusnoková. The first part of the project included old, sad songs and the next, Hojna nejna, focused on dance tunes or czardas. Two other small projects ended with the release of CDs with Roma Christmas songs and children’s songs.

The musicians involved with Phurikane giľa changed over the course of time, Belišová said, but several bands and individual musicians were stable elements throughout the project. She added that the next logical step for her was to approach professional musicians and ask them to cooperate with the project and this led to the AfterPhurikane project, which now seems to have a life of its own.

Belišová commented that while Neve giľa maps contemporary music of Roma communities, often influenced by Slovak music or by world and ethno music from regions such as the Balkans, her future plans include a collection of religious songs. She noted that all of the songbooks and other printed materials that accompany her CDs and DVDs have an English version.

Martin Šulík spoke at the DVD’s launch about how he viewed the importance of Neve giľa and Belišová’s past projects: “You come to understand that it is not only important to record old, disappearing songs but also the new ones that keep coming and going, changing with the locality and the changing mood and taste of audiences. This is a whole subculture, worthy of discovering and enjoying. And of course, the film can help the majority society enter the interior of Roma homes, perhaps for the first time ever, and find that the residents might be poor but their homes are clean and cosy.”

Marek Šulík added that he thinks Belišová is conducting the best campaign against racism in Slovakia, noting that “she has engaged a lot of artists, filmmakers, translators and other professionals who have never met Roma before – like me – and once you start associating intensely with them, communicating and trying to understand them, all traces of hatred or anger disappear. And you also forget the simplifications widely reported in the media”.