A DESIRE to revive old traditions – and also to relish fresh delicacies – led volunteers organised by the Župkov amateur sports club to hold an end-of-year pig slaughter and then make various traditional delicacies. 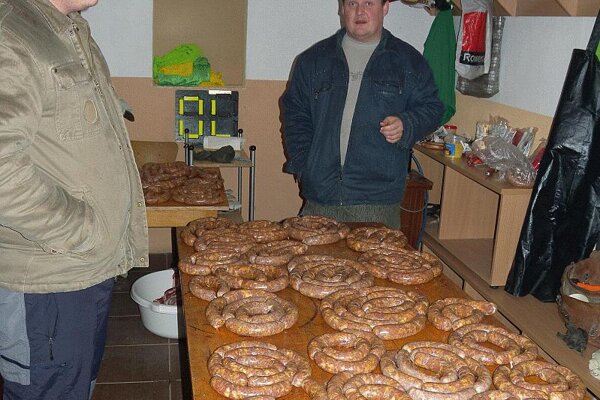 A DESIRE to revive old traditions – and also to relish fresh delicacies – led volunteers organised by the Župkov amateur sports club to hold an end-of-year pig slaughter and then make various traditional delicacies.

Župkov is a village in central Slovakia and its mayor, Ján Tomáš, told the TASR newswire about some of the local traditions: “Of course, it was a good tradition to have a nice drink of spirits before the slaughtering itself. Especially the butcher and his helpers needed something to boost their spirits and encourage them. Then everybody went to the piggery where the pig was shot and bled and then the task began for the women.”

As in years gone by, residents of the village were served several delicacies such as black pudding, sausages, and sauerkraut soup on December 30, 2011, while also enjoying mulled wine and Christmas punch.

“The pig was bought by the municipal office and all other ingredients and necessities were organised by the volunteers. By selling the meat products and the meals, the organisers could cover their expenses,” the mayor said, adding that the main goal was not to make a profit but to have fun, provide fun for others and commemorate old traditions. The mayor noted that in the past there was a pig at almost every rural home and its winter slaughter was a social occasion.

The village’s farewell programme to the old year continued on New Year’s Eve. “In order to burn up what we had eaten on December 30 we had a sports programme the next day beginning at noon. It included the first year of a Silvester (New Year’s Eve) Run, a carnival for children, and a football and ice hockey tournament,” Tomáš told TASR, followed by an early-evening bonfire, music and fireworks at midnight.