THE COMFORT of markets often hinges on a single letter, or a plus or a minus sign: this is the name of the sovereign ratings game. And on January 13 nine eurozone countries lost a round of that game. Following through on its warning in December last year, the Standard & Poor’s international credit rating agency downgraded the long-term rating for nine European countries, including Slovakia. Slovakia’s rating fell one notch, from A+ to A, but unlike the other eight its future outlook was ranked as ‘stable’ rather than ‘negative’, meaning that a further credit downgrade in the near future is judged to be less likely. 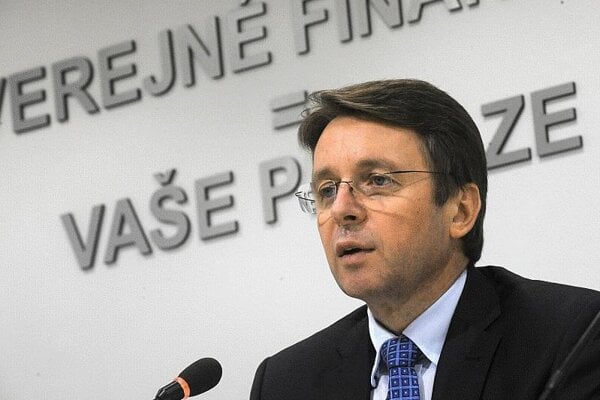 THE COMFORT of markets often hinges on a single letter, or a plus or a minus sign: this is the name of the sovereign ratings game. And on January 13 nine eurozone countries lost a round of that game. Following through on its warning in December last year, the Standard & Poor’s international credit rating agency downgraded the long-term rating for nine European countries, including Slovakia. Slovakia’s rating fell one notch, from A+ to A, but unlike the other eight its future outlook was ranked as ‘stable’ rather than ‘negative’, meaning that a further credit downgrade in the near future is judged to be less likely.

Market watchers promptly commented that the downgrades would put extra pressure on the eurozone to seek remedies for the debt crisis and that the situation would have been more serious for Slovakia if it had been the only country to see its rating cut.

The downgrade brought no immediate problems for Slovakia: just a couple of days after Standard & Poor’s decision, Slovakia’s debt servicing agency sold state treasury bills on more favourable terms than it had just last summer. Moreover, Vladimír Tvaroška, Slovakia’s Finance Ministry state secretary (i.e. deputy minister), said that he did not expect there to be any dramatic effect on the financial market from the downgrade, according to the SITA newswire.

“Impacts on financing the state debt could have been worse if it had been only the rating of Slovakia or of a small number of countries that were lowered,” the head of Slovakia’s Debt Management and Liquidity Agency (ARDAL), Daniel Bytčánek, told The Slovak Spectator on January 19. “What is important is the stable outlook of the rating, which has assured investors that in the coming period no further downgrades of Slovakia’s rating can be expected, and distinguishes us from other eurozone countries.”

Slovakia has now joined Germany, which retained its top AAA rating, as the only two eurozone countries with a stable outlook.

As for the impact the downgrade might have on Slovakia, Bytčánek said that the debt servicing costs of the state would gradually rise and that it would have a mildly negative impact on those seeking loans from commercial banks. This will mostly affect businesses, local governments and households, he added.

Vladimír Zlacký, chief economist with UniCredit Bank, explained to The Slovak Spectator that the downgrade was underpinned by the reasoning that the causes of the eurozone debt crisis have not been sufficiently understood or responded to at the European level. The rating agency did not see the summit of December 8 and 9, 2011, as having been a sufficient breakthrough in solving the crisis in the eurozone, Zlacký added.

“Considering Slovakia’s high integration into the eurozone through trading and financial channels, potential negative development in the eurozone could have a negative impact on the growth outlook of Slovakia’s economy,” Zlacký said.

Yet Zlacký does not expect that the lowered rating will lead to a considerable increase in the cost of servicing Slovakia’s debt.

“Rating agencies rather follow the development on financial markets and for some participants in the market, lowering the rating of the nine countries including Slovakia is not a new factor in their calculations,” said Zlacký.

The interest rate at the auction on January 16 was 1.9699 percent per annum, Juraj Pekár from ARDAL told the TASR newswire, adding that overall demand for the short-term securities was €892.4 million, with €143.6 million in bids from non-resident investors.

According to Bytčánek, the rating downgrade has not yet been reflected in the margin demanded for state treasury bills.

“We have sold them on even more advantageous terms than last summer,” Bytčánek said, adding that the reason for this was the need for banks to invest at the beginning of the year. “The stable rating outlook that I previously mentioned helped as well.”

In terms of interest margins, Bytčánek said that the rating downgrade will have a negative impact on long-term securities, but noted that sales of these are very limited.

Standard & Poor’s has also reduced the rating of the European Financial Stability Facility (EFSF), the eurozone’s temporary sovereign bailout fund, yet Bytčánek of ARDAL said that the lowered ratings were in some cases “not entirely fair [or] logical” suggesting that some countries with worse public finances outside the eurozone now have a better rating than countries which have “a better actual state of public finances and larger responsibility for the functioning of the union and the eurozone”. Nevertheless, the new credit rating of the EFSF, at AA+, is still very good, he added.

“There will be more intense pressure on increasing the guarantees and the engagement of particular countries, which if carried out will negatively impact Slovakia,” said Bytčánek.
Zlacký agrees that this move reduces the firepower of the EFSF and might result in the need to increase the facility’s resources.

Slovakia’s Finance Minister Ivan Mikloš said on January 19 that the fall of the government of Iveta Radičová in October last year and the subsequent failure to carry out several important reforms lay behind the downgrade. Mikloš rejected arguments by Freedom and Solidarity (SaS), the governing party whose actions led to the fall of the government, that Slovakia’s agreement to strengthen the EFSF was the motive for the rating agency’s move.

“It is mainly the unstable political situation, which meant that in four areas we weren’t able to fulfil our intentions, which if there were no early elections, could have been fulfilled,” Mikloš said, as quoted by SITA.