CULTURE can be the best, or easiest, way to bring together two nations, however distant and different they might be. The question is where it is best to start. “We have been opening windows and doors since we came here in 2008,” Luiz Francisco Pandia Braconnot, minister-counsellor of the Brazilian Embassy, told the Slovak Spectator. Edna Ferreira de Souza from the embassy’s cultural section added: “I have come to think that culture and cultural exchange starts with children because they are open, have open minds, and perceive things differently from adults. That is why we try to address children specifically.” 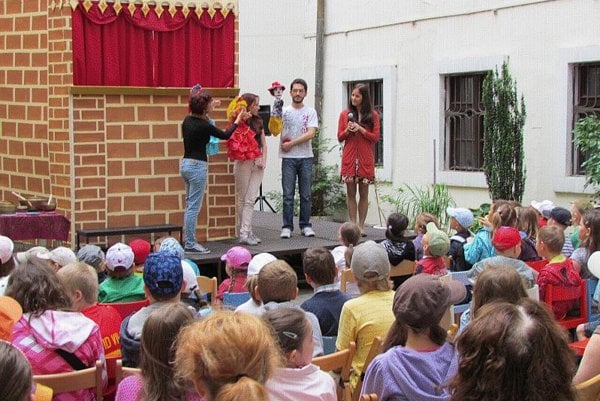 CULTURE can be the best, or easiest, way to bring together two nations, however distant and different they might be. The question is where it is best to start. “We have been opening windows and doors since we came here in 2008,” Luiz Francisco Pandia Braconnot, minister-counsellor of the Brazilian Embassy, told the Slovak Spectator. Edna Ferreira de Souza from the embassy’s cultural section added: “I have come to think that culture and cultural exchange starts with children because they are open, have open minds, and perceive things differently from adults. That is why we try to address children specifically.”

Brazil is currently the only South American country - and the second one in Latin America, after Cuba - with an embassy in Slovakia. “When we started, there was a big vacuum of knowledge – Slovaks did not know much about Brazil – and so we started to show ourselves, saying: ‘Look, Brazil is this.’ But on the other hand, there is not much knowledge about Slovakia in my homeland either.
There is some presence there, thanks to Slovak immigrants and their descendants,” Braconnot explained, adding that there are many similarities between the two countries, but also some differences. “We are both connected through Europe – you lie in Europe, and Brazil was settled by Europeans. But our country is in fact a mixture: Europeans mingled with Africans and indigenous people, creating a totally new, different culture. This culture puts together three continents – the Americas with its Indian culture, Africa with its music and dance, food and artistic manifestations (such as capoeira, a special mixture of music, dance and martial art), and Europe which really gave the framework to Brazil,” he said. Another thing that Slovakia and Brazil have in common is religion, which for both is prevailingly Roman Catholic: 92 percent of Brazilians are Catholic. “Brazil is the biggest Catholic country worldwide. This, of course, is reflected in our culture,” de Souza noted

Apart from a special Catholic mass taking place on January 20 (see separate story on this page), de Souza highlighted events that have taken place in the more than three years since the embassy was established, especially those that have received continued support. “The Christmas Bazaar of the International Women’s Club, an annual benefit event, has become a popular and attractive way of presenting ourselves,” de Souza said. “And in this way, we want to be closer to our host country, and also give something back to the people, especially to those who really need it; maybe just something small, but to give.” Another regular event is the Days of Ibero-American Film: “We try to intensify our presence each year and are planning to participate also this year,” de Souza stated.

As for their other regular activities, de Souza mentioned Children’s Day (June 1 is celebrated as International Children’s Day in Slovakia), which was started only in 2011 but turned out to be a big success. “We brought in a puppet theatre from Brazil and an interpreter translated the story for audiences; it took place near the Bibiana House of Children. Then the children were instructed to make their own puppets and were asked to draw what they saw in the performance and the best works were exhibited. A group of young children we often cooperate with played and danced in the square and onlookers copied their movements. Our Brazilian Children’s Day was called “Friends in the World” and due to its success we plan to repeat it in 2012,” de Souza said.

According to de Souza, another project, in which the embassy screens movies at schools, has turned out to be a big success, too. One of the movies – they are dubbed into Slovak – is about an Indian girl living in the Amazon that has an ecological message but is understandable and attractive to children. They are asked to draw the films afterward and the drawings are displayed later at a small exhibition in the consular department. As well as pupils at schools in Mierová Street and Dolné Hony in Bratislava, others in Ostredková Street in the capital and in nearby Most pri Bratislave will see the Amazon film by the end of February.

Visual art does not need to be translated and is also easier to transport: this is perhaps one of the reasons why renowned Brazilian artists’ works tend to appear in Slovakia. “In August and September 2009, there was a big exposition of graphic art – Brazilian Art on Paper, which showed 62 artists,” de Souza said, also citing the example of famous Brazilian architect Oscar Niemeyer (or Oscar Ribeiro de Almeida Niemeyer Soaresfilho, to give him his full name) who is nearly 103 years old and still works, is the one who designed much of Brazil’s modern capital, Brasília, and who was inspired by Prague and Slovakia. An exhibition of Niemeyer’s work took place in Bratislava in 2009. Works by famous photographer Alvaro Villela were presented in Galéria Profil, reflecting the darker side of Brazil – the hard life of people in the arid north of the country. People there do not open up easily to strangers but Villela managed to depict their struggle for water and survival in a barely inhabitable place.

Music is a handy association when Brazil is mentioned. The country’s music is not only exotic to central European ears, but also very attractive. “We first experienced total applause and enormous success when Raoul de Souza, the jazz trombonist, had a performance in the Main Square during the 2009 Summer Cultural Festival,” Braconnot recalled. “First, there were maybe just 30 onlookers in the square, but after he started playing, I saw them call their friends and relatives, and when he finished, there were about 600 people crammed in the small place,” he added.

Classical music is maybe less associated with Brazil, but the country has some masters in this sphere too. World-famous guitar player Fabio Zanon managed to enchant Slovak audiences, and also gave a workshop. Another musician that came to sweep Slovaks off their feet was Celso Machado, who – both embassy officials agree – is really something special. “He is a phenomenon, probably not human, but I don’t know what he is. He makes his guitar give out sounds you would never believe are made by this instrument. He can mimic a truck going uphill; he can play like a stadium full of applauding people, or like a summer band has just been crossing the street. Whatever,” Braconnot enthused. “Machado was a huge surprise: he had audiences eat out of his hand. I think he can make even a stone sing,” de Souza continued. She also mentioned a book about Brazil written by a Slovak author which was presented at the 2011 Bibliotéka book fair, where Brazil had a programme; and the ITF Slovakiatour fair which was taking place as this edition of The Slovak Spectator went to print, where Brazil is hosting a stall and a performance of capoeira.

De Souza stressed that Slovaks have already started taking an interest in Brazilian culture and have started spreading it – like capoeira and Campana Batucada, an ensemble of percussion instruments. But she also stressed that it works both ways: there are four Brazilian companies operating in Slovakia and the number of Brazilians living here has increased from about 30 four years ago to the current 109; many more visit Slovakia each year. “I have never noticed so many Portuguese-speaking tourists in summer in downtown Bratislava as recently. I tend to ask them about how they feel. “We are here for just a few hours, but it is so beautiful here that we plan to return,” they say. I am glad that they have finally put Slovakia on their route,” de Souza concluded.