The world-famous spa in Piešťany marked an anniversary recently: the town’s art nouveau Thermia Palace Hotel celebrated its 100th year. Located on the landscaped Spa Island in Piešťany, which is known for its healing mud-spa, this five-star hotel is directly connected to the Irma spa. Both facilities represent the architecture and art of the beginning of the 20th century. 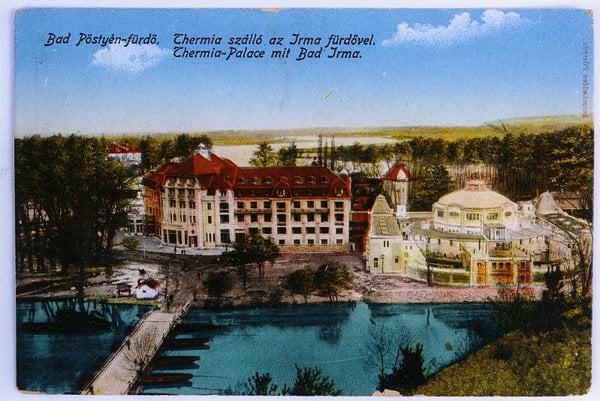 The world-famous spa in Piešťany marked an anniversary recently: the town’s art nouveau Thermia Palace Hotel celebrated its 100th year. Located on the landscaped Spa Island in Piešťany, which is known for its healing mud-spa, this five-star hotel is directly connected to the Irma spa. Both facilities represent the architecture and art of the beginning of the 20th century.

The hotel was opened by Ľudovít Winter, son of Alexander Winter, the entrepreneur who founded the company that originally managed the whole spa resort. After Alexander’s death his sons Ľudovít and Imrich continued his work. Ľudovít approached Budapest architects Ármin Hegedüs and Henrich Böhm, who became the designers of the complex of buildings. However, Ľudovít was not completely satisfied with their design and only found the solution when he travelled on holiday to Switzerland and came across a satisfactory way to connect the buildings at a specialised architectural studio in Lausanne. Despite the turbulent political situation, he took out a loan to finance construction. Building work began in September 1910 and, despite numerous problems, both buildings – the hotel and the health spa – were completed in April 1912, ready to welcome their first guests.

The artistic decorations, technical equipment, carpentry, furnishings, and so on were supplied by renowned companies mostly from the Hungarian part of the Austro-Hungarian Empire, but also by Viennese companies. Both buildings are decorated with all kinds of portable and fixed works of art. The famous Czech artist Alfons Mucha, who visited the spa several times and whose daughter was healed here, in 1932 donated a large allegorical painting, God Bless the Spring of Health, to the spa. The oil painting, granted pride of place above one of the main doors, shows a recovering girl – Mucha’s daughter – sitting in a rocking chair. Other precious artworks include a ceramic peacock on the façade made by Piešťany-born sculptor Valér Vavro, paintings by Slovak painter and graphic designer Aurel Kajlich; the coat of arms of a Nawab of Bhopal, and more.

It is said that the name Thermia given to the hotel was the idea of Alexander Winter’s wife Henrieta, and that Ľudovít then added the word Palace to symbolise the position of the hotel and its link to the spa. The spa was named after Irma Erdödy, the wife of the then-spa owner, Imrich Erdödy. The hotel in its first decades accommodated famous celebrities of the time, including Czechoslovakia’s foreign minister – later to become president – Edvard Beneš, legendary Russian opera singer Feodor Chaliapin, American actress Lillian Gish, and others. One of the legendary events of those times, a competition for luxury cars known as the Concours d’Elegance took place annually between 1932 and 1937. The competition was the grand climax of car trips to Piešťany, and many famous spa guests and local doctors participated in the event in gleaming automobiles. This tradition was revived as a parade of vintage cars under the new name Golden Ribbons of Piešťany – Concours d’Elegance in 1991.

But the hotel is marked by more than just its old fame and splendour. In 2006, the Thermia Palace Hotel underwent a major reconstruction and reopened as the first five-star spa hotel in Slovakia. It continues to attract prominent guests including actors and actresses, moviemakers and athletes; the Thermia Palace Hotel also held a Visegrad Group presidents’ meeting in September 2008, and has accommodated UN Secretary General Ban Ki-Moon and various foreign ambassadors.