A sense of Svätý Jur’s past

THIS fascinating postcard from 1910 shows the centre of Svätý Jur, a picturesque small town near Bratislava. The card is brimming with interesting monuments which can be identified. 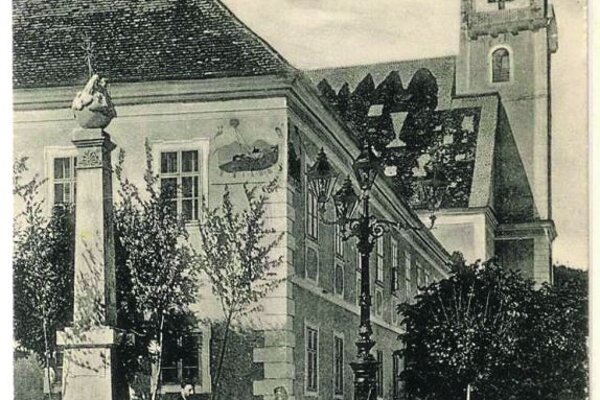 THIS fascinating postcard from 1910 shows the centre of Svätý Jur, a picturesque small town near Bratislava. The card is brimming with interesting monuments which can be identified.

The church in the background is the Church of the Holy Trinity built between 1651 and 1654 by Protestants of the Augsburg Confession (Lutherans). But the church stayed in their hands only until 1674. As was common in those years of religious turbulence, Catholics would win the upper hand and then the Protestants again. Whoever had the local power tended to persecute the others and churches sometimes changed their religious affiliations several times.

The column in the foreground, the so-called plague column, bears the same name as the church and was built in 1831. Innumerable plague columns were built in that year as a massive cholera epidemic raged across all of Slovakia. In Svätý Jur, the outbreak lasted for 52 days, leaving 182 people dead.

Between the column and the church, we can see the massive building of the Piarist monastery built in 1720, which later housed a famous secondary school. On the wall of the monastery, close to the roof, an interesting sundial can be seen. It is thought that the town itself was originally depicted there but it was not preserved and today’s sundial, made by painter Karol Drexler, shows the symbols of this wine-producing region – sun and grapes.

Over the course of the 20th century, many Slovak towns were devastated in various ways due to two world wars, several kinds of government and political ideology. But we Slovak citizens are also to blame for the destruction of many historical monuments and buildings – through our lack of interest.