VERY few anticipated that a Facebook-based initiative to protest what the organisers called high-level political corruption in Slovakia would grow into a mass rally that has caught the attention of the media as well as politicians. The success of the January 27 rally, dubbed Gorilla Protest, has led the organisers to demand that a number of politicians who are referred to – directly or indirectly – in the so-called Gorilla file exit public life. Organisers say a follow-up rally in Bratislava planned for February 3 could draw 10,000 protesters and that additional demonstrations are planned in other cities across Slovakia. 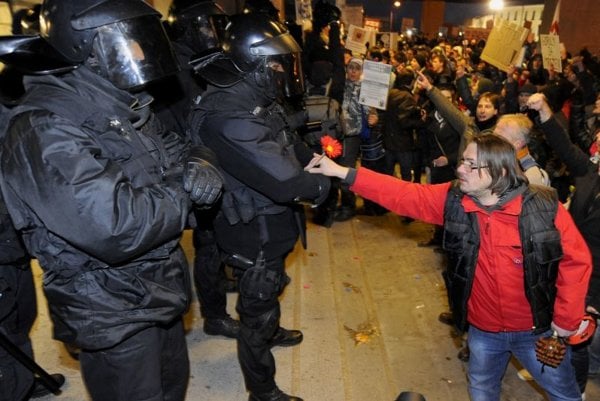 VERY few anticipated that a Facebook-based initiative to protest what the organisers called high-level political corruption in Slovakia would grow into a mass rally that has caught the attention of the media as well as politicians. The success of the January 27 rally, dubbed Gorilla Protest, has led the organisers to demand that a number of politicians who are referred to – directly or indirectly – in the so-called Gorilla file exit public life. Organisers say a follow-up rally in Bratislava planned for February 3 could draw 10,000 protesters and that additional demonstrations are planned in other cities across Slovakia.

There are different estimates of how many people attended the January 27 rally. The media reported that around 800 people were present at the start of the march in SNP Square while the one of the primary organisers, Lucia Gallová, told the TASR newswire that “some claim 10,000, some claim 1,000, but I know that we had 2,000 candles and they were all distributed”.


The organisers are demanding that Prime Minister Iveta Radičová immediately dismiss Mikuláš Dzurinda, Slovakia’s foreign minister, Finance Minister Ivan Mikloš, both of whom are members of the Slovak Democratic and Christian Union (SDKÚ) party, as well as Deputy Prime Minister Rudolf Chmel, from Most-Híd. They also are demanding the resignation of Pavol Hrušovský of the Christian Democratic Movement (KDH) from his post as speaker of parliament, as well as the resignations of Deputy Speakers Béla Bugár of Most-Híd and Robert Fico of Smer, the SITA newswire reported.

“We demand that the political parties draw consequences,” Gallová said, adding that the government and its ministers should dismiss all persons whose names were mentioned in the Gorilla file from any state positions on boards of directors or advisory boards. The Gorilla file is an unverified document circulating on the internet, reportedly containing transcripts of bugged conversations made by Slovakia’s intelligence service, the SIS. The transcripts imply that there was high-level political corruption during the second government of Dzurinda in 2005-2006.

The three principal organisers of the protest have said they are not partisans of any political party. Gallová is a self-employed Bratislavan who works at a New Age television station called Baina TV, Peter Pčolinský, originally from Košice, has worked in banking and insurance for 11 years, and Ľubica Lehotská is another self-employed person from Bratislava, the Pravda daily reported. According to other media reports, Pčolinský's brother works as the head of the office of Interior Minister Daniel Lipšic.

The organisers have set forth 10 demands on their Gorilla Protest website, including that all intelligence service operatives who are able to provide more information about the Gorilla file be released from their oath of secrecy, and that the government and parliament “immediately cancel the early elections scheduled for March 10, 2012 and move them to the end of September due to suspicions of serious criminal activities by candidates of the political parties”.

Pčolinský said that the assets of Jaroslav Haščák, a co-owner of Penta investment group, Anna Bubeníková, the former head of Slovakia’s National Property Fund (FNM), her husband Roman Bubeník, and Jirko Malchárek, the economy minister in 2005-6, as well as the assets of the Penta investment group, should be frozen and not be available to them until the investigation is finished, the SITA newswire reported.

The Gorilla Protest website also demands the cancellation of MPs’ immunity from criminal prosecution and adoption of a new law on corporate criminal responsibility. The protest organisers say they are also ready to file criminal complaints against several individuals.

“We have decided to file a criminal complaint against Mikuláš Dzurinda, who in his position as prime minister, despite having information about serious economic crimes, did not act,” Pčolinský stated, as quoted by SITA.

Pčolinský added that criminal complaints will also be filed against Karol Mitrík, the head of the Slovak Information Service (SIS), the intelligence service that reportedly conducted the wiretaps, Jozef Magala, the previous SIS chief, and Tibor Gašpar, the former director of the Anti-Corruption Department of the Slovak Police, SITA reported.

“I can join those who are asking for a fair investigation of every crime,” Dzurinda stated, as quoted by the Sme daily, saying that he does not view himself as “standing on the other side of the barricades” even though members of his party are featured in the Gorilla file.

During the January 27 demonstration, some individuals expressed their disgust with the current political environment by throwing bananas, eggs and firecrackers in front of the parliament building. Lehotská told the media that she was sorry for the mess in front of parliament but also expressed regret about the politicians who have caused defilement inside the building.

Lehotská added that parliament now wants to use taxpayers’ money to file a criminal complaint against unknown perpetrators for damage to the building. The secretary of the Parliament Office told the SITA newswire that he had assessed the damage to the parliament building at between €3,000 and €5,000 and that he had no choice but to file a criminal complaint because the law requires him to do so.


Political analysts said the protest on January 27 has sent a warning signal to politicians that there is group of young people who disagree strongly with the corrupt practices allegedly described in the Gorilla file and that tension is rising in society.

“One cannot expect there will be 25,000, 50,000 or 100,000 people attending,” Grigorij Mesežnikov, a political scientist and president of the Institute for Public Affairs (IVO) think tank, told The Slovak Spectator. “Yet 5,000 or 10,000 people mean there is a certain potential for disagreement and protest, which should be a warning sign for established political parties so that they avoid being involved in similar cases in the future,” Mesežnikov said.

Juraj Marušiak from the Institute of Political Science of the Slovak Academy of Sciences told The Slovak Spectator that the fact that police officers were not willing to intervene against the demonstrators as they approached parliament is evidence that “their willingness to defend the current political elite is not very strong”. He added that it is also clear that a part of society is ready to consider more radical solutions rather than peaceful protests, saying “this is a new element in Slovak political culture”.

“The political elites are practically clueless. They don’t know how to react to such protests except with the threat of violence or menace. In effect, it resembles the situation before 1989,” Marušiak told The Slovak Spectator. He continued that the immediate reaction by politicians to the protest resembled the so-called normalisation period in Czechoslovakia after the 1968 occupation by Warsaw Pact troops, offering his opinion that Slovak politicians have problems in engaging in dialogue with their political opponents as well as with the general public.

Political scientist Miroslav Kusý told The Slovak Spectator that the Gorilla Protest shows that citizens’ patience has its limits on these kinds of issues and that strong civic pressure will be put on the politicians as a warning.

“The politicians can go only as far as citizens allow them to go,” Kusý stated. “If citizens are passive then it is a pleasure [for politicians] to work in that political arena and benefit from it to the largest degree possible.”

Marušiak noted that the unifying factor among the protesters at present is what he called a ‘negative consensus’ and that those who participated in the demonstration are very heterogeneous, coming from a broad spectrum of the population. But he also said many participants at the first Gorilla demonstration were from the middle class, people who use the internet, adding that when social discontent affects the middle class it qualitatively changes the character of political conflict in Slovakia.

Mesežnikov stated that “many different issues are involved; there is a spontaneous intention to express disagreement, but at the same time there is an effort by so-called alternative political parties to ride the wave of these protests and pick up some political capital.”

As The Slovak Spectator went to press organisers announced that nearly 20,000 individuals had confirmed via Facebook that they planned to attend the protest on February 3 or are considering doing so. Gallová told the media that she expected at least half of those to participate, the SITA newswire reported.