'Sasanka' is the latest file

SASANKA, meaning anemone in English, is the name of yet another anonymous but potentially explosive document that has emerged on the internet in the run-up to next month’s parliamentary elections in Slovakia. Sasanka surfaced a little more than a month after the so-called Gorilla file appeared, which features purported transcripts of bugged conversations that imply high-level political corruption in 2005-6. The new document, posted on the same server that hosts Gorilla, features SMS text messages allegedly exchanged between the chairman of Freedom and Solidarity (SaS), Richard Sulík, and businessman Marián Kočner, whose name has surfaced in several previous controversies in the past two decades. 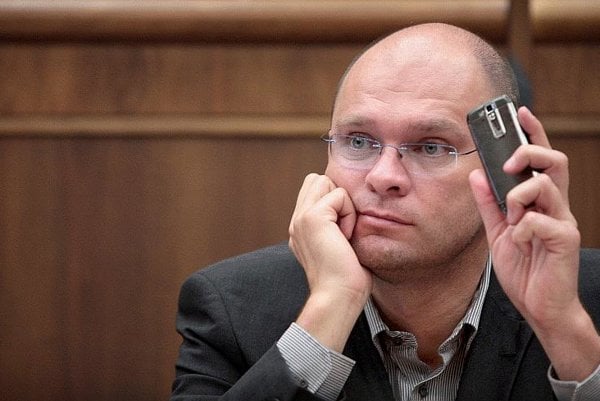 SASANKA, meaning anemone in English, is the name of yet another anonymous but potentially explosive document that has emerged on the internet in the run-up to next month’s parliamentary elections in Slovakia. Sasanka surfaced a little more than a month after the so-called Gorilla file appeared, which features purported transcripts of bugged conversations that imply high-level political corruption in 2005-6. The new document, posted on the same server that hosts Gorilla, features SMS text messages allegedly exchanged between the chairman of Freedom and Solidarity (SaS), Richard Sulík, and businessman Marián Kočner, whose name has surfaced in several previous controversies in the past two decades.

Sulík, who was speaker of parliament at the time the messages were apparently exchanged, confirmed on January 27 that he had met and texted Kočner but said he did not remember the exact nature of messages they had exchanged. He also denounced the publication of the Sasanka file as part of a campaign of dirty tricks against his political party.

The short messages appearing in the Sasanka file allegedly show that Sulík kept Kočner informed about the tortuous process of choosing a new general prosecutor (GP) in late 2010. In a secret ballot vote in parliament in December 2010, MPs from one or more of the ruling parties cast their votes for the incumbent general prosecutor, Dobroslav Trnka, even though all of the coalition parties had agreed not to vote for him. Prime Minister Iveta Radičová had threatened to resign if Trnka were re-elected and these rogue votes meant that this very nearly happened.

Sulík told the media that he had not seen Kočner for more than a year, adding that he had notified Radičová of their exchange of communications. When asked why he had notified the prime minister, Sulík said he assumed that the exchanges might cause problems in the future. The SaS chairman has stated that even if the texts in the Sasanka file are authentic they do not imply any wrongdoing on his part.

“We were not [talking about] any corruption or dirty business; no bribery or kickbacks,” Sulík stated, as quoted by the Sme daily, saying that he had used Kočner as a source of information while admitting that he had also told Kočner “some things, sometimes”.

The person or persons who posted the Sasanka file speculate in a text attached to the file that SaS could have been interested in having Trnka re-elected and obliging the prosecutor to sweep under the rug an investigation linked to the National Agency for the Development of Small and Medium Enterprises (NADSME), a case that SaS sponsors were allegedly involved in.

The transcripts dated December 4, 2010, only two days after Trnka came one vote short of being elected, allegedly show that Sulík sent Kočner the following message: “Tomorrow I am writing a newsletter about the selection of the GP, I will send it to you for review.” The Sasanka file reports Kočner responded that Sulík should send him an SMS after he had done so because he was not always on his e-mail. The transcripts also indicate that Sulík had allegedly sent Kočner messages about the ruling coalition’s nominations to a committee that was to choose a joint coalition nominee for general prosecutor.

Sulík responded to the text attached to the Sasanka file by noting that deputies from the Smer and Slovak Democratic and Christian Union (SDKÚ) parties had nominated Trnka for re-election and that SaS had proposed Jozef Čentéš for the post after reaching agreement with coalition partners. He also stated that SaS has the most transparent financing of any of Slovakia’s political parties, SITA reported.

The spokesman for Slovak President Ivan Gašparovič has cited the information reportedly in the Sasanka file to support the president’s decision not to formally appoint Čentéš as general prosecutor even though parliament elected him to the post last June.

“The doubts of the president about the election of the general prosecutor by parliament were strengthened by the information from the published Sasanka file, with alleged communication between Speaker of Parliament Richard Sulík and Marián Kočner,” Marek Trubač, the president’s spokesman, told SITA on January 31. “Because of this, the president also considers the most responsible decision to be to wait for the ruling by the Constitutional Court on the complaints made by Čentéš and Trnka.”

The Constitutional Court has cases before it filed by both Čentéš and Trnka.

Most political parties have been rather restrained in commenting on Sulík’s alleged communications in the Sasanka file.

However, SDKÚ chairman Mikuláš Dzurinda told the media that the emergence of the Sasanka file would be a good opportunity for Interior Minister Daniel Lipšic, a member of the Christian Democratic Movement (KDH), to “open his eyes and see that somebody is toying with the centre-right parties so as to corrode the coalition”, the TASR newswire reported.

Robert Fico, the leader of the opposition Smer party, said on January 27 that it was inappropriate that what he called “intelligence games” had entered the election campaign.

Kočner’s name first surfaced in the media in the mid 1990s when he was suspected of fraud in connection with the Technopol case, along with the son of then-president Michal Kováč. Following the abduction of Kováč Jr. to Austria all parties involved in the case were amnestied. Kočner is a former classmate of Pavol Rusko, the former head of TV Markíza and a one-time economy minister. In 1998 Kočner led what has been called “a siege of the TV Markíza building” that led to wholesale changes in the management of the station, the Sme daily reported, writing also that Kočner’s name appeared in the so-called ‘mafia files’, a leaked list of persons considered to be of interest to the police, Sme daily reported.

The role of leaked documents


Political analysts commenting on the Sasanka and Gorilla files said that not only is the content of these documents worrisome but also the manner in which documents apparently emanating from Slovakia’s intelligence service have been leaked.

Political scientist Miroslav Kusý told The Slovak Spectator that other “secret documents” have appeared in the past before parliamentary elections that had the potential to harm certain politicians.

“It [Sasanka] casts doubt on the party [SaS] that evidently does not appear in the Gorilla file and which has been benefiting from that,” Kusý said, adding that release of the Sasanka document was intended to show that even SaS has dirty fingers.

Grigorij Mesežnikov, a political scientist and president of the Institute for Public Affairs think tank, told The Slovak Spectator that he is not even sure if other documents will not emerge ahead of the elections. But he stressed that there are other important aspects of the documents that are not being discussed very widely.

“For example, the context of how the secret services work in Slovakia,” Mesežnikov stated. “There is much talk about cronyism and corruption but these are materials which obviously have their origin in the intelligence services and the question is how it is possible that these materials are now leaking? There are even issues being leaked that might be considered state secrets. This might be quite a serious finding.”

Mesežnikov said this is not being discussed very much and the public is not paying attention to it but that obviously “people there [in the intelligence services] have managed to arrange the leaking of such information”.

Mesežnikov said SaS is fighting to preserve its voter support from 2010 and its position is being influenced by several factors, adding that “Sasanka could be a small piece in a mosaic but I think this party has several problems”.

“Right-wing voters, including those of SaS, are disappointed that their parties were not able to sustain the government for longer,” Mesežnikov said. “Thus, Sasanka could negatively affect SaS – but we will see only after the next opinion polls.”

Juraj Marušiak, a senior research fellow with the Institute of Political Sciences at the Slovak Academy of Sciences, said he believes the Sasanka file is part of an election campaign battle that is “being fought by the centre-right parties among each other”.

As for what impact Sasanka might have on SaS’ performance in the March election, Marušiak said this will depend mostly on whether the media and politicians are willing and able to pursue information in the file and try to decode the messages, at least to the degree that is happening with the Gorilla file.

“It is significant that Gorilla, with its scale, has overshadowed previous scandals and that a large part of the right wing has used it to make a concentrated attack on the SDKÚ,” Marušiak stated, adding that this aspect of the case should not be underestimated.

Marušiak also said that SaS’ rhetoric is growing more antagonistic towards the SDKÚ and it is understandably trying to compensate for the alleged revelations in the Sasanka file, adding that it will be important to see whether SaS succeeds, and if the Sasanka brouhaha is overshadowed by the protests against the allegations in the Gorilla file. Marušiak noted that SaS was not directly mentioned in a negative context at the Gorilla demonstration held in Bratislava on January 27.