SILICON Valley is at the heart of innovation in the US. Last year representatives of four Slovak startup companies won the chance to spend three months in this environment to see how IT innovation occurs in that part of the world. While the competition to choose the winning companies was organised rather quickly, the level of interest from Slovak innovators and startup companies was very high. Based on the electrifying atmosphere of the competition, the organisers of the first Startup Awards.SK are positive that additional Slovak startups will seek to transform their bright ideas into globally-successful companies in coming years. 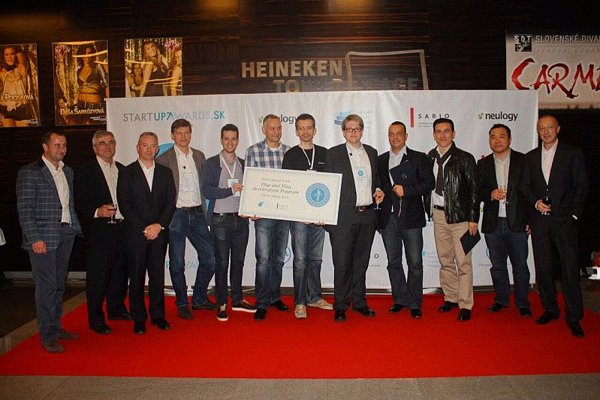 SILICON Valley is at the heart of innovation in the US. Last year representatives of four Slovak startup companies won the chance to spend three months in this environment to see how IT innovation occurs in that part of the world. While the competition to choose the winning companies was organised rather quickly, the level of interest from Slovak innovators and startup companies was very high. Based on the electrifying atmosphere of the competition, the organisers of the first Startup Awards.SK are positive that additional Slovak startups will seek to transform their bright ideas into globally-successful companies in coming years.

The genesis of Startup Awards.SK

The idea of finding ways to help so-called startup companies just in the phase of development and research for markets has begun to spread in Slovakia. Events such as a StartupCamp and a Startup Weekend have helped to create the base of a startup ecosystem in Slovakia, according to Ivan Štefunko from Neulogy, a company that has been involved in these activities from the very beginning.
“On the basis of an 'innocent' talk with Veit Dengler from Dell company, an idea to do something more formal and unique was born,” Štefunko told The Slovak Spectator. Originally the pair was considering a competition to judge business plans but later they decided it would be much more interesting to appraise and then support startups that had already begun to implement business plans.

Dell provided the impetus to get the programme going and was the general partner for the competition, supervising the selection processes and offering the prizes to the winners. Dengler, Dell’s general manager for the central and eastern Europe region, was a member of the jury for the competition’s final judging.

“We want to support innovation, great technology and services – ideas that make life more productive, easier and better,” Dengler told The Slovak Spectator. “Michael Dell got started the same way, as a 19-year old in college. We want to help bring forth the next generation of entrepreneurs in Slovakia.”

After the Slovak Investment and Trade Development Agency (SARIO), a government agency, and KPMG consultancy got involved in the idea, the Startup Awards.SK competition was started.

“Startup Awards.SK has established a new era of entrepreneurship in Slovakia,” Dengler stated. “It is here to establish a startup revolution and a startup state of mind in Slovakia. Everybody with a great idea has the opportunity to launch a company and make an impact.”

SARIO, in pursuing the goals of the Slovak government’s Minerva 2.0 strategy document launched its Slovak Start-up Development Programme in 2011 to support innovative and technologically-oriented Slovak companies and attract investors, Ľubomíra Gabrielová, SARIO’s spokesperson, told The Slovak Spectator. Since SARIO had little experience in working with startups, it welcomed the offer to cooperate with Neulogy by participating in the Startup Awards.SK.

SARIO provided a large dose of added value to the project when it arranged a partnership with the Plug and Play Tech Center, a business incubator in Silicon Valley in California.

“Via financing from the state budget through the Slovak Start-up Development Programme, the winners have the opportunity to stay three months in the acceleration programme at the Plug and Play Tech Center,” Gabrielová told The Slovak Spectator, adding that the four winners have access to all services provided by the incubator, including access to potential investors, mentoring, and other assistance in moving their companies forward.

The competition had two rounds. In the first round in early November the jury shortlisted 10 projects, then joined by the winner of the Startup Weekend. The final selection was made on November 17 in Bratislava and involved representatives from the Slovak IT community, guests from Silicon Valley and investors from central Europe. Each of the finalists had five minutes to present its product or service, a requirement was that it had been launched after January 1, 2009, and then five minutes to answer questions from the jury. The four startups selected to travel to Silicon Valley were Nicereply, CoverPage, WorkInField, and Studentive.

Štefunko views the first edition of Startup Awards.SK as very successful as 37 entries were part of the competition.

“This number stunned us,” Štefunko said, adding that the competition was organised quickly, they had little time for promotion, and could only focus on visits to universities. “A very colourful mixture enrolled – from copies of foreign models of doing business up to companies that are literally bringing paradigmatic changes to the IT sector. Some projects, actually those more successful, were so-called spinoff ideas from already existing, larger companies like Sygic, Websupport or Monogram. This means that Slovakia does not dramatically differ in terms of innovativeness from neighbouring countries or Europe.”

Dengler said he listened with great interest to the pitches from the 11 finalists.
“Slovakia has a wonderful potential to become a new centre of innovation and fresh ideas and I am happy we could help some of the best projects,” Dengler told The Slovak Spectator. “Nicereply, for example, will have the opportunity to make a pitch to a worldwide customer care leader of Dell. Their product is really great and if they work hard on it, the company could conceivably be successful all over the world.”

Nicereply entered its online analytical tool to measure customer satisfaction in the competition and Monogram offered its CoverPage project, a tool for digital publishing designed for use by individuals and small creative groups. WorkInField is a free smartphone app and cloud-based web service that makes it easy to track trips, jobs and distance travelled for work-related purposes. Studentive is a web platform that connects students and companies based on unique way of interaction.

Representatives of the winning companies expect their stay in Silicon Valley will help them better understand how the startup ecosystem and the entire IT sector functions in Silicon Valley, and allow them to establish contacts with potential investors and customers.

“Silicon Valley is the place with the highest concentration of investors and intellectual capital in the world – a true cradle of innovation,” Martin Jerkovič, a co-founder of Studentive, told The Slovak Spectator, adding that there is also a great motivational atmosphere with hundreds of startups in the area. “Being a college student and winning a three-month stay in Silicon Valley is like a miracle. It is really a great chance to completely change our view of business and absorb experience that is not common for guys just 22+ years old. It will be a huge leap forward for me and my teammates.”

The individuals and institutions behind Startup Awards.SK plan to organise a second year for the competition but Štefunko noted that an innovation-based project like this cannot continue without some innovations of its own.

“Next year we plan to expand the categories to the sectors of biotechnology and renewable resources,” Štefunko told The Slovak Spectator. “Our goal is also to involve R&D institutions as much as possible because this environment is a typical source of innovation.”

SARIO also will continue to be involved as its Slovak Start-up Development Programme is projected to last to the end of 2012.

“This completely new type of competition showed the best from among innovative, startup companies as well as the most interesting technologies and ideas from young Slovak business people,” Gabrielová said, adding that it has placed Slovakia among the list of countries such as Austria, Denmark, Finland and Singapore that have sent representatives to Silicon Valley to get new knowledge as well as to develop and present their innovative projects at an international forum.

“We expect that thanks to these new, discovered talents, a transfer of know-how, technologies and capital to Slovakia will be enabled, as well as attraction of high-tech investments,” Gabrielová said.