IT WAS 35 years ago that two notable Slovak villages, Vlkolínec and Čičmany, were declared protected national monuments by the Slovak government on January 26, 1977. Vlkolínec was also named a UNESCO World Heritage site in 1993. 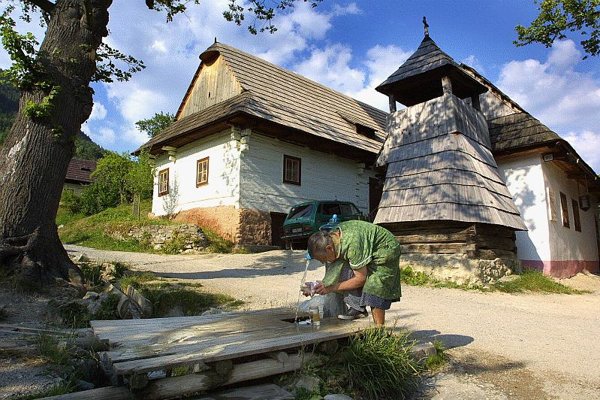 IT WAS 35 years ago that two notable Slovak villages, Vlkolínec and Čičmany, were declared protected national monuments by the Slovak government on January 26, 1977. Vlkolínec was also named a UNESCO World Heritage site in 1993.

Vlkolínec lies in the Veľká Fatra mountain range under Sidorovo hill and is an administrative borough of the town of Ružomberok. The village is a remarkably intact settlement with characteristic central European loghouse architecture, often found in mountainous areas. The layout of the town has remained virtually unchanged and the architectural style has been fully retained. Currently there are 45 unaltered buildings in the village retaining many early construction features and it is considered the best preserved and most comprehensive set of traditional buildings in Slovakia.

The first written record of the settlement dates back to 1376 and the village’s heyday was in the 18th century when it counted 70 houses and several farm buildings. The village has a well-preserved wooden bell tower and a well from 1770 as well as a school building and the Church of the Blessed Virgin Mary built in 1875. The bell tower and well cover were constructed using traditional materials and are covered with wooden shingles, as are the roofs of all original buildings in Vlkolínec.

The municipality of Čičmany lies in the Strážovské Vrchy mountain range, bordering on the Upper Nitra region, the middle Váh region and the southwestern Turiec region, near the spring of the Rajčianka river. Čičmany was named a protected monument because of its unique architecture and its ornamentally-painted loghouses. The original development was characterised by large family houses, often with two floors, where as many as 30 people lived, the TASR newswire wrote.

But the houses are most well-known for their ornamental, geometric decorations that date back about 200 years and were painted with white lime that had a protective function. The decorations on the farmhouses caught the attention of Slovak architect Dušan Jurkovič, who prepared a typical Čičmany decorative design for the ethnographic exhibition in Prague in 1895, as well as architectural details of the loghouses themselves. Thanks to Jurkovič’s work, the houses could be reconstructed after the lower end of the village was destroyed by fire in 1921.

The Čičmany geometrical design will adorn the official clothing of the Slovak team at this year's Olympic Games.