Right in disarray as election approaches

WITH ONLY three weeks remaining until the parliamentary elections, the most aggressive fight for voters is taking place on the right of Slovak politics. The Slovak Democratic and Christian Union (SDKÚ), the party of the outgoing prime minister, Iveta Radičová, and until recently the strongest centre-right party, has seen its support slump in opinion polls to near the 5-percent threshold below which the party would drop out of parliament altogether. 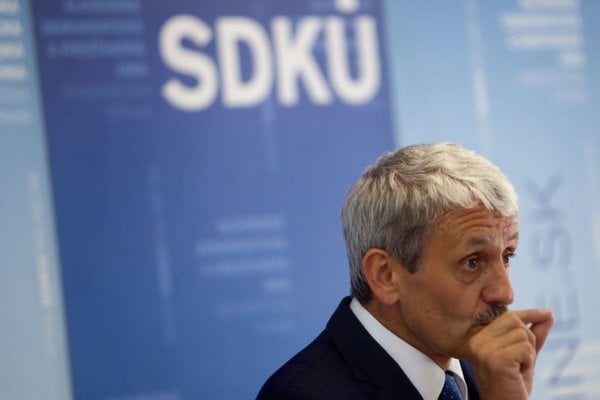 WITH ONLY three weeks remaining until the parliamentary elections, the most aggressive fight for voters is taking place on the right of Slovak politics. The Slovak Democratic and Christian Union (SDKÚ), the party of the outgoing prime minister, Iveta Radičová, and until recently the strongest centre-right party, has seen its support slump in opinion polls to near the 5-percent threshold below which the party would drop out of parliament altogether.

Perhaps in response, the SDKÚ has been seeking a ceasefire with other centre-right parties and appears to be placing much hope in the so-called lesser-evil vote factor, by which centre-right voters may ultimately decide to back the party simply in order to prevent a victory by Smer. Robert Fico’s ostensibly left-leaning party has retained its apparently dominant position without expending very much energy in the election campaign to date: all recent polls suggest it will emerge as the largest party in parliamnet after the general election on March 10.

While observers agree that the SDKÚ, which is led by former prime minister Mikuláš Dzurinda, tends to poll much more weakly in opinion surveys than it does in actual elections, the recent results have prompted some nervousness in party ranks.

A Polis survey, conducted for TV news channel TA3, reported SDKÚ support at 5.1 percent, while the party scored 6.1 percent according to a Focus poll prepared for the public broadcaster Radio and Television of Slovakia (RTVS) in early February. Ján Baránek of Polis suggested that the party’s approval rate is somewhere around 5 percent.

Along with the SDKÚ, support for Freedom and Solidarity (SaS) has also declined markedly. It collected 6.6 percent in the Polis poll and 5.9 percent in the Focus poll. By contrast, the poll results of the Christian Democratic Movement (KDH), the oldest of the centre-right parties, have improved somewhat: it received 9.8 percent as measured by Polis and 10.3 percent according to the Focus survey.

One of the polls suggested that Igor Matovič’s new party, Ordinary People and Independent Personalities (OĽaNO), would not only make it into parliament but could even perform better than the SDKÚ or SaS: it got 8.9 percent, according to Focus. However, the Polis survey, which unlike the Focus poll was conducted after the party suffered a major rift, gave OĽaNO only 5 percent.

There was similar disagreement between the pollsters over the fortunes of another new party, 99 Percent – Civic Voice, which has become well known for its aggressive but somewhat nebulous campaign. The Focus survey suggested the party would comfortably win seats in parliament, with 6.9-percent support, while Polis indicated that its popularity was well below the 5-percent threshold, at 3.3 percent.

However, analysts say there seems little prospect of this actually happening. “I certainly cannot imagine how this could be done now,” political scientist and president of the Institute for Public Affairs (IVO) Grigorij Mesežnikov commented when asked by The Slovak Spectator whether he saw a unification of the right-wing parties three weeks before the parliamentary elections as possible.

The SDKÚ is apparently paying the price for a series of developments: the Gorilla affair, which has prompted allegations of high-level political corruption during the second Dzurinda government; the imminent departure of Radičová from the party; and the conflicted feelings of a large part of the electorate over Dzurinda’s tenacious grip on his party’s chairmanship. Dzurinda, who was prime minister for 8 years between 1998 and 2006, is consistently listed in polls as one of Slovakia’s least popular politicians.

With three weeks to go before the parliamentary elections there is no time for personnel changes, said the SDKÚ’s deputy chairwoman Lucia Žitňanská on February 15, adding that it would do no good if the party were now to start dealing with itself.

“Three weeks is time to explain that [the election] is a chance which we risk wasting,” said Žitňanská, as quoted by the SITA newswire. As justice minister she has led well-received reforms to the country’s judicial system and has been mentioned as a possible replacement for Dzurinda.

Žitňanská said that the SDKÚ is ready to explain to its supporters and to undecided voters that the party is ready to complete changes that will lead to the rule of law in Slovakia. Nevertheless, she added that after the elections the party would hold a congress at which internal personnel issues would be resolved.

Despite this, the SDKÚ was reported to be meeting over the weekend of February 18-19, after The Slovak Spectator went to print, with one candidate on its list, Zita Pleštinská, saying that she intended to raise Dzurinda’s eventual departure.

Dzurinda, who is 56, was first elected SDKÚ chairman at the party’s founding congress on November 17, 2000. In 1994, he served as minister of transport, then as prime minister following the parliamentary elections in 1998 and 2002. Since July 2010 he has been minister of foreign affairs.

Mesežnikov said that Dzurinda made similar efforts to unify the centre-right before previous elections but was not very successful, despite then being in a much stronger position than he is today.

“The situation has changed, since the SDKÚ is currently losing support, and is thereby weakened,” Mesežnikov told The Slovak Spectator. “Shortly before the elections there is a stronger centre-right party emerging [the KDH]. They have very little time.”

According to Mesežnikov, the proposal for cooperation is completely legitimate and understandable but any real cooperation between the parties will only take place after they perform well in the elections. Before the elections no centre-right party will make any clear decision on how to continue after the national vote, he added.

“We are convinced that we would be headed to hell if we had a single-party government, a government of Smer,” Dzurinda said on February 7, adding that a Smer-led constitutional majority with the help of the Slovak National Party (SNS) would be even worse.

Dzurinda even said, as quoted by SITA, that he would not mind it if KDH leader Ján Figeľ were to organise a meeting of centre-right parties as the leader of that political space: “If Ján Figeľ feels like the leader of the right wing, I would be very happy if he were to start organising us”.

Following Dzurinda’s call for unity, SaS chair Richard Sulík also said an alliance of centre-right parties should be created, suggesting that this could work unless “someone is looking forward to cooperation with Smer”. Sulík now says that he would be willing to work with the SDKÚ despite earlier calling on Dzurinda and Finance Minister Ivan Mikloš, a deputy chairman of the SDKÚ, to withdraw from politics.

When Sulík was asked a week after making that call for further comment, he responded: “I expressed my personal stance that I rule out sitting with them in a government. The SaS approach will depend on the election results. I do not see it as necessary to dictate conditions on behalf of the whole of SaS now.”

Mesežnikov suggested that after the elections personnel decisions will not play such a significant role that they threaten cooperation between the centre-right parties.

When asked to define the most significant problems of the right, Mesežnikov said that these included the failure to seek accord over the issues that divide them, along with a lack of effective communication with voters and clear answers to issues that right-wing voters want addressed.