A CALL for the departure of Štefan Harabin from his post as president of the Supreme Court was added to the list of demands tabled by the organisers of the Gorilla Protests shortly before street rallies scheduled for mid-February were postponed and replaced by what organisers called public ‘round tables’ and discussions. While the demand for the dismissal of Slovakia’s top judge resonated strongly with the thousands of street protesters, Harabin called the protests a “manipulation” for the benefit of “the most corrupt parties”. 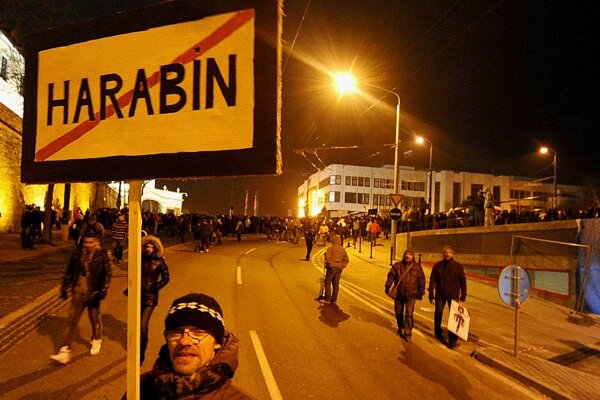 A new demand by protestors is for Štefan Harabin to leave the Supreme Court. (Source: TASR)
Font size:A-|A+  Comments disabled

A CALL for the departure of Štefan Harabin from his post as president of the Supreme Court was added to the list of demands tabled by the organisers of the Gorilla Protests shortly before street rallies scheduled for mid-February were postponed and replaced by what organisers called public ‘round tables’ and discussions. While the demand for the dismissal of Slovakia’s top judge resonated strongly with the thousands of street protesters, Harabin called the protests a “manipulation” for the benefit of “the most corrupt parties”.

The organisers of the protest said that Harabin, who served as justice minister under the previous government after being nominated by the Movement for a Democratic Slovakia (HZDS), was “morally discredited” and “has not yet explained his [alleged] contacts with the head of the Albanian drugs mob”.

Justice Minister Lucia Žitňanská, a nominee of the Slovak Democratic and Christian Union (SDKÚ), has initiated a series of disciplinary actions against Harabin. In December 2011, Žitňanská, when filing her fourth proposal for disciplinary proceedings against him, for what she alleged were violations of the law and other serious missteps, proposed that Harabin be stripped of his status as a judge by the Constitutional Court. Žitňanská also asked the Constitutional Court to suspend him temporarily from his post as president of the Supreme Court.

A spokesperson for the team of protest organisers, Alena Krempaská – who has since left the organising team – said that the demand to dismiss Harabin came from people who gathered at the rallies.

“It was one of the things which resonated from all sides,” said Krempaská, as quoted by the Sme daily, adding that at least one fifth of the banners pertained to Harabin, who in the eyes of the people “represents the untrustworthy judiciary”.

The call was also supported by Zuzana Wienk from political ethics watchdog Fair-Play Alliance, who in a speech to protesters specified a series of negative elements of society, naming one of these as being that “the country’s judiciary can be led by a person who has a friendly relationship with a convicted criminal and the alleged head of the drugs mafia”.

Harabin responded that those who are calling for his dismissal as Supreme Court president are manipulators connected to Interior Minister Daniel Lipšic and to Zuzana Wienk, who he claimed “is sponsored from the funds of international financial speculator, billionaire George Soros”. He said they were deliberately focusing popular discontent with the current political situation onto the judiciary.

“The small group of people which is presenting itself as the ‘organisers’ of the alleged civil convulsions in Bratislava has confirmed that they are not [concerned] about the investigation of the corruption scandals in Slovakia, but about [providing] hidden support for the most corrupted political parties,” read a statement by Harabin published on the website of Slovakia’s Judicial Council, which he also chairs.

“My person as a judge has been the object of attacks by the most corrupted politicians from Gorilla for 12 years,” Harabin added.

He also stressed that the name of not a single judge appeared in the Gorilla file and that when he was serving as justice minister no book was prevented from being published, an apparent reference to a court decision made earlier this month to block publication of a book about the Gorilla file. Ministers, however, played no part in that decision, and the prime minister went on record to criticise the judge’s ruling in that case while pointing out that she could not intervene to stop it. Harabin invited all the protests organisers who are lobbying for a purge in public life – except for Peter Pčolinský and Zuzana Wienk – to discuss the issues with him. He said he was prepared to show them what he called “hole-proof evidence” against “Lipšic’s forged documents”.

In her December submission, the justice minister filed a criminal complaint against Harabin, alleging that he tampered with the independence of the Supreme Court and that he violated the law by making unwarranted changes to the composition of several court senates.

The Constitutional Court has already ruled in two similar cases that the law was violated, and in a decision on October 18, 2011, noted the same problem in the Supreme Court’s handling of a case involving Tipos, the state-owned lottery company, and ordered that this dispute, which has already dragged on for 10 years, be returned to the lower courts.

Žitňanská also charged in her latest disciplinary complaint that Harabin had authorised regular judges to substitute for him while he was absent even though the law does not permit him to do so.
Harabin’s office dismissed the disciplinary proposal as electioneering by the justice minister and called it “personal revenge by the minister”. Žitňanská asked the Constitutional Court to merge the several pending disciplinary cases against Harabin and to quickly set a date for a hearing, stating that the cases have been dragging on for far too long.

The leader of the opposition Smer party, Robert Fico, said that the protesters’ demands might have been influenced by representatives of the centre-right governing parties.

“I do not have a problem with protests, let people protest if they consider it right, but we [Smer] reject the politicisation of the protests,” he said in a political talk show on TV news channel TA3.

Political scientist Grigorij Mesežnikov said that that the demand for Harabin’s dismissal was justified and reasonable and that finally “something has emerged that has a clear character and with which people can identify”, he told The Slovak Spectator.

However, he warned that if Robert Fico forms the next government the chance of this demand actually being realised would be zero.

Sociologist Zuzana Kusá nevertheless suggested that the latest demands presented by the organisers of the Gorilla Protests could represent politicisation of the whole movement. She said she expected the demands to be more general, according to an interview with the Pravda daily.

“It is surprising that young people specify [their demands] in such detail,” she said, as quoted by Pravda, adding that the organisers could have been advised by people with political connections.
“It is said that this revolution is rather right-wing and has goals which are being promoted by right-wing parties,” Kusá added, without specifying who was saying this.