AFTER the third Gorilla Protest in Bratislava saw less than half of the number of protesters who turned out previously at the city’s SNP Square, the organisers announced they were shifting discussion about their demands prompted by suspicions of high-level political corruption in Slovakia from the streets to round tables. They say that even though protesters are now set to discuss issues such as new rules for referendums, calls for the dismissal of Štefan Harabin as president of the Supreme Court, or demands that the president appoint general prosecutor-elect Jozef Čentéš, they could still return to the streets. However, the protest leaders themselves seem to be struggling to speak with one voice, after several splits emerged. 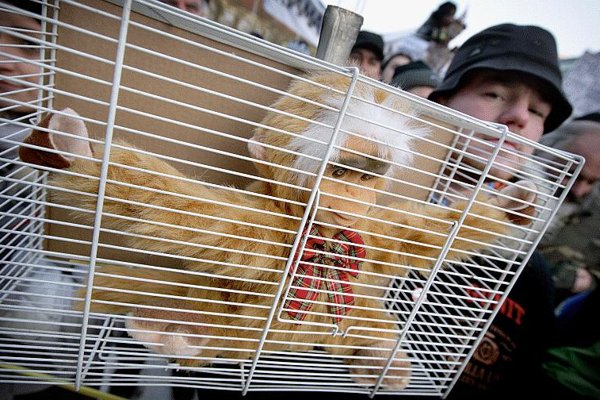 AFTER the third Gorilla Protest in Bratislava saw less than half of the number of protesters who turned out previously at the city’s SNP Square, the organisers announced they were shifting discussion about their demands prompted by suspicions of high-level political corruption in Slovakia from the streets to round tables. They say that even though protesters are now set to discuss issues such as new rules for referendums, calls for the dismissal of Štefan Harabin as president of the Supreme Court, or demands that the president appoint general prosecutor-elect Jozef Čentéš, they could still return to the streets. However, the protest leaders themselves seem to be struggling to speak with one voice, after several splits emerged.

The organisers said in a statement that there will still be at least one large protest, on March 9, just one day before the parliamentary elections.

The first public discussion is to be held on February 17 on Vajnorská Street in Bratislava. A member of the Gorilla Protest organising team, Lucia Gallová, told the Sme daily that more details would be announced later. No further information was available as The Slovak Spectator went to print late on February 16.

Discussions are also planned by a group which split from the original organising team. One of the renegades, Stanislava Červeňová, objected to what she called the involvement of the Christian Democratic Movement (KDH) in organising the protests.

“[The Gorilla organising team] features Peter Pčolinský, whose brother works at the KDH-led Interior Ministry, whose mother is a KDH member, and whose father is a KDH member too,” Červeňová said, as quoted by TASR, claiming that because Gallová’s boyfriend is an active member of the KDH she also has ‘links’ to the party.

The departing group said they want to fight for the enforcement of direct democracy by creating small groups to discuss problematic issues and try to find solutions. The outcome of their discussions will be posted on the internet with the option of people voting for the best solutions, the group said. They also intend to present the best ideas in referendums, the Sme daily reported.

Some of the latest demands presented by the main organisers of the Gorilla Protest held in Bratislava on February 10 included the dismissal of Štefan Harabin as president of the Supreme Court (see separate story), the appointment of Jozef Čentéš to the post of general prosecutor, and changes to the country’s rules for holding citizen referendums. Unlike previous protests, the demonstration was restricted to SNP Square and most people left after the organisers had declared an official end to the event.

However, a group of about 200 people did move to the Presidential Palace where they threw firecrackers into the front courtyard. Sme wrote that there were no big incidents and that most of the crowd moved on to a concert given by Czech singer Daniel Landa.

Compared to the Gorilla II Protest held on February 3, when an estimated 15,000 people turned out, this time the Bratislava protest was attended by only about 3,000 people. Parallel protests held in other Slovak towns including Poprad and Prievidza did not appear to draw the numbers of protestors from previous events either.

Protest organiser Alena Krempaská, who later left the organising team, told Sme that the small turnout could have been the result of the freezing weather, fear of extremist groups, technical problems or just impatience. Yet, some political analysts say that the euphoria of a protest movement does not usually last long and that the recently proclaimed political demands did not resonate among ordinary people.

Political scientist Miroslav Kusý said he assumes that with elections just around the corner, politicians will withstand the pressure and count on what he called “the human factor”. He told The Slovak Spectator that enthusiasm would gradually die out and after the elections other problems would appear.

“It is cold outside and every enthusiasm will ease up when it is not leading to specific results,” Kusý said. He added that ardour has an expiration date and that Slovaks have rich experience from the past, noting that protest euphoria lasted only two weeks when the Russians occupied Czechoslovakia in August 1968.

Martin Slosiarik from the Focus polling agency added that discontent caused by the frustrations of part of the population incited by the Gorilla file had triggered the protests. He said he believes that if the protests are to be beneficial, it is necessary that their demands crystallise and the movement gradually develops an ideology.

“It is necessary that a relatively small group of participants emerge that can further elaborate some way to achieve social change,” Slosiarik said, adding that another important element at this stage is the appearance of a charismatic leader who could officially represent the movement.

Kusý added that apart from the lack of charismatic leaders – a situation which he contrasted with 1989, when figures such as Ján Budaj and Milan Kňažko roused the crowds during the Velvet Revolution – there are no slogans or demands that might attract a wide audience. He said that demanding the appointment of the general prosecutor or the dismissal of Harabin sounds very distant to ordinary people.

Ján Baránek from the Polis polling agency concurred, telling The Slovak Spectator that he saw two factors that had led to the reduced turnout on February 10: bizarre demands and, even more importantly, the lack of a clear leader.

“There are instances where the psychology of the masses functions and demonstrations act like this; they need to have a distinct leader, a symbol of their resistance,” Baránek said, adding that speakers stood on the podium, but none of them was a leader.

Baránek said that the demands would resonate in the minds of protesters only to the extent that the demonstrations remain massive: in the event that participation decreases, the demands will weaken too. He noted that politicians have appropriated some of the demands, mainly a change to the current electoral system, which Baránek said he regards as corruption-friendly.

Zuzana Mistríková, one of the student leaders of the Velvet Revolution, told the Sme daily that the protests were a logical outcome of the situation in society. She added that the Gorilla file was the last straw when it came to the patience of people who were not directly involved in politics and thought the country’s direction had to change.

Mistríková said it is not quite appropriate to compare 1989 and today’s protests. In a sense it was easier for the 1989 leaders, she said, as they knew what to demand: regime change.But now, she added, there is no easy recipe because no other system provides real solutions. Hence, it is not really fair to reproach the protest organisers or demonstrators for their inability to formulate clear demands, Mistríková said.

Every realistic politician knows what the people on the squares are demanding but they are just waiting for the protest demonstrations to die out and to somehow manage the situation until the elections, Mistríková told Sme.