Slovakia’s unemployment rate in December 2011 hit a seven-year peak and labour market analysts’ forecasts for 2012 are rather dismal. While employers will continue to seek employees with expert skills and experienced managers who can generate genuine business growth, no effective solution has yet been found for the legions of Slovaks who have low levels of education or those who have been unemployed for a long period. Slovakia’s unemployment rate was 13.59 percent in December 2011, its highest level since July 2004 when the rate stood at 13.65 percent. The number of jobless people ready to immediately take up jobs in December stood at 362,428, an increase of 6,773 persons, or 0.26 percentage points, compared to November 2011. Compared with December 2010, the number of unemployed people increased by 27,525 according to the Labour, Social Affairs and Family Centre (ÚPSVaR). 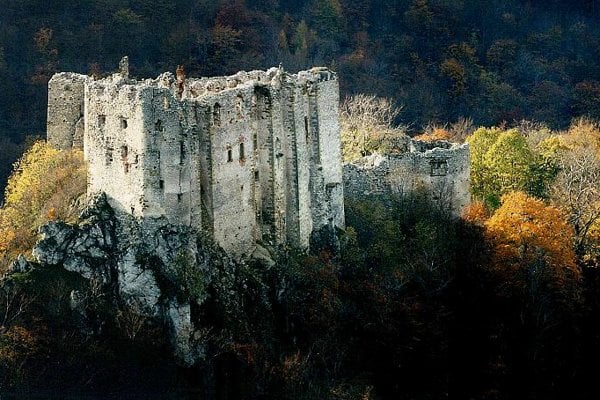 Uhrovec was one of the castles involved in a castle-renovation employment project. (Source: Courtesy of Peter Horanský)
Font size:A-|A+

Slovakia’s unemployment rate in December 2011 hit a seven-year peak and labour market analysts’ forecasts for 2012 are rather dismal. While employers will continue to seek employees with expert skills and experienced managers who can generate genuine business growth, no effective solution has yet been found for the legions of Slovaks who have low levels of education or those who have been unemployed for a long period.

Slovakia’s unemployment rate was 13.59 percent in December 2011, its highest level since July 2004 when the rate stood at 13.65 percent. The number of jobless people ready to immediately take up jobs in December stood at 362,428, an increase of 6,773 persons, or 0.26 percentage points, compared to November 2011. Compared with December 2010, the number of unemployed people increased by 27,525 according to the Labour, Social Affairs and Family Centre (ÚPSVaR).

While analysts conceded that December’s level of unemployment, with 399,800 Slovaks jobless, including those who are currently on sick or maternity leave or are otherwise unable to accept a job, is at a dangerously high level they noted that an uptick in joblessness is normal in the month of December.

“The truth is that the December rise in the number of unemployed is repeated each year,” Eva Sadovská, an analyst with Poštová Banka, told The Slovak Spectator, adding that the trend only becomes more visible in times of high unemployment.

“Though Bratislava Region has the lowest [current] unemployment rate, it is already higher than the unemployment rate was in Trenčín, Trnava and Žilina regions just before the start of the economic crisis in August 2008,” Sadovská noted, adding that Banská Bystrica Region continues to have the highest unemployment rate in the country, approaching 20 percent.

Economic distress in Hungary is also leading to large-scale layoffs in that country and that is having a negative impact on the jobless rate in some parts of southern Slovakia.

Slovakia posted the third highest unemployment rate among all member countries of the OECD, which recorded an average unemployment rate across its member countries of 8.2 percent in November 2011. Slovakia had a jobless rate of 13.5 percent in November, with only Spain (22.9 percent jobless rate) and Ireland (14.6 percent) recording gloomier numbers, the SITA newswire reported.

While political parties routinely accuse each other causing rising unemployment, the Federation of Employers’ Associations (AZZZ) sees the economic crisis and Slovakia’s poor education system behind the high unemployment.

“We have experience that we are educating people who only end up at job offices,” Tomáš Malatinský, the AZZZ president, stated, as quoted by the SITA newswire in late January.

In assessing the labour market situation, Michal Páleník, the head of the Employment Institute think tank, said he prefers to analyse the indicator of total employment. He told The Slovak Spectator that the unemployment statistics are affected by the large post-war generation coming into retirement age and that the less numerous members of the post-revolution generation are arriving in the labour market. He added that the labour market situation beyond Slovak borders also has some impacts on domestic unemployment since it is estimated that 10 to 15 percent of economically active Slovaks were working abroad before the economic crisis hit across Europe.

The most recent statistics indicate that employment levels rose in most of the monitored economic sectors during November, the Slovak Statistics Office announced in the middle of January.

The information and telecommunication technology sector reported the largest relative growth, when the number of its employees rose by 13.3 percent in November 2011 compared with November 2010. The industrial sector reported 2.8-percent growth in employment, meaning that the moderate growth that started in May 2011 continued into November. The construction sector registered an employment drop of 3.7 percent.

Labour market analysts expect that the jobless rate will continue to increase in January since unemployment traditionally goes up because seasonal work ends during the winter months.

“Later during the year, especially over its first half, we expect that the unemployment rate will continue to slowly increase and it may get stabilised or even decrease a bit only at the end of 2012,” Ľubomír Koršňák, an analyst of UniCredit Bank Slovakia, wrote in a memo.

Páleník also stressed to The Slovak Spectator that there is an unfavourable geographical distribution of those searching for jobs.

“Most of those searching for jobs live outside the growing regions in western Slovakia or towns along the Váh River and Bratislava and its vicinity,” said Páleník. “Most of the jobseekers live in southern and eastern parts of Slovakia, where the number of work opportunities is really low.”

He also noted that many of those searching for work have been jobless for a long period of time and may have lost their working habits and moreover most of them have a low level of education.

“The problem is that work positions are being created for people with middle and higher education,” said Páleník. “Even if they are in the ‘proper’ region, they do not have a chance to get a job because they do not have the necessary education and skills.”

Páleník sees the only solution for this problem to be lifelong education since there is only a slight chance that appropriate jobs for low-educated people will be created here as companies usually move these kinds of jobs to other countries, for example to certain Asian countries. He added that forms of “positive discrimination” might help the long-term unemployed.

The Ministry of Labour, Social Affairs and Family has prepared seven projects to combat long-term unemployment during the period from 2012 to 2015 with the aim to generate 10,000 jobs with the help of both the public and private sectors as well as funds from the EU. Four of the projects, however, are connected to the legislation on employment services that will not be debated in parliament until a new government takes office after the March elections. So only three of the projects were launched in January, with the project to renovate castles being the most well-known as it is actually a continuation of a pilot project from 2010. The plan is for 10 to 20 castles and other cultural sites to be reconstructed, providing between 830 and 900 jobs over three years.

The ministry will leave the remaining prepared programmes for decision-making and implementation by the next government, Daniela Šulcová from the press department of the Ministry of Labour, Social Affairs and Family told The Slovak Spectator.

Other than recruitment campaigns by IT companies such as ESET, IBM Slovensko, and NESS Slovensko that plan to hire several hundred specialists, HR experts do not expect any significant change in demand in the labour market.

“One should not expect any significant mood improvement in the labour market,” Igor Šulík, managing partner of Amrop Slovakia, told The Slovak Spectator, adding that better than expected economic results by individual companies might serve as a small, positive impulse. However, he added that this is quite individualised, as some companies are hiring new staff because they have new projects while others are reducing their staff because of declines in orders. “But there is still demand for quality people and experienced managers and this should not change in the future.”

With regards to the willingness of people to change jobs, Šulík believes that stability and certainty will continue to play a very important role and that mostly people facing the inevitable loss of a job or those who receive a really lucrative offer would consider changing jobs.

Šulík believes that occupations with lower added value have been hit the hardest by the crisis because companies can often get along without these positions, listing jobs such as various administrative positions in marketing and HR as well as jobs in processes that can be outsourced. On the other hand, occupations that are required during restructuring of companies and dealing with hits from the economic crisis remain attractive, Šulík said, listing positions such as bankruptcy lawyers, executors, debt collectors, and similar positions.

Martin Krekáč, a senior partner at Amrop Slovakia and chairman of Jenewein Group, said that it is necessary to think about what types of job skills will move people into the foreground of the job market.

“Based on a survey conducted by the Amrop Management Lab focused on the human resource needs of key investors in central and eastern Europe and/or in the Commonwealth of Independent States, development of skills and increasing the engagement of an employee will be theme number one until 2014,” Krekáč said. ”The crisis has thrown ‘irreplaceable’ and ‘self-confident’ people from the saddle and opened the door for another type of person – flexible ‘co-entrepreneurs’ who generate new ideas, are not afraid of taking up responsibility, and are able to take correct decisions, motivate others and want to continue to gain new knowledge.”

Krekáč believes that those who have mastered modern technologies and who can generate innovative ideas and projects will succeed in the labour market, adding that there is still high demand for managers-strategists who are able to lead companies that are in trouble and can return them to a trajectory of success. Krekáč believes demand for these kinds of managers will even grow.

“Those managers who are able to lead a company from the crisis with his or her own individual ways and not only textbook processes will find trust,” Krekáč stated.

The high level of unemployment and fears that a recession is returning to Slovakia are affecting the HR policies of companies.

“The reward policy of individual companies is affected particularly by their budget and the outlook for months to come,” Mario Fondati, partner of Amrop Slovakia told The Slovak Spectator. “Costs are being trimmed further but on the other hand there is a rising need to stabilise and motivate key persons via benefits and bonus programmes. With respect to labour relations, organisations in certain sectors are reaching, and in all probability will continue in the future to reach, for ways that enable a swift reduction of labour – through personnel leasing, temporary job agreements, external partnership and so on.”

While the Slovak arm of Manpower, a company providing employment services, views the developments in the Slovak labour market in a moderately optimistic way for at least the first quarter of 2012 based on its quarterly Manpower Index survey, it also confirmed an increase in the number of workers who have alternative types of employment contracts rather than full-time, permanent contracts.

Peter Peregrim, area manager of Manpower in Slovakia, told The Slovak Spectator that many of these alternative contracts are signed for seasonal work and in the construction, agriculture and the machine industry sectors of the economy.