Labour gets organised with mixed results

Last year, representatives of at least two key professions expressed their dissatisfaction with their status in society and, more importantly, with the figures on their wage slips. Even though the country’s Confederation of Trade Unions (KOZ) organised several rallies to protest against changes to the Labour Code and reforms planned by the centre-right government to the country’s tax and payroll-tax system, it was the direct action taken by hospital doctors that had the biggest effect. 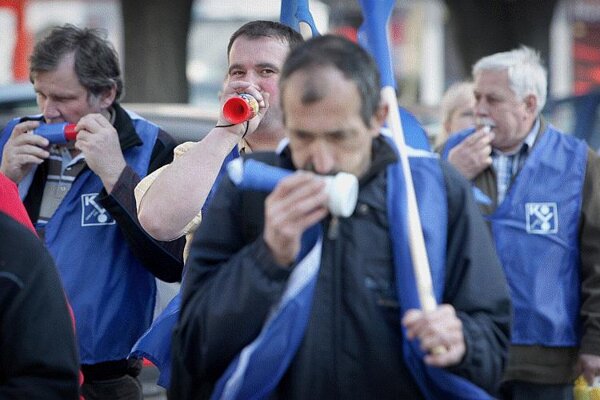 Unions say they will monitor closely the actions of the next government. (Source: Sme Tomáš Benedikovič)
Font size:A-|A+  Comments disabled

Last year, representatives of at least two key professions expressed their dissatisfaction with their status in society and, more importantly, with the figures on their wage slips. Even though the country’s Confederation of Trade Unions (KOZ) organised several rallies to protest against changes to the Labour Code and reforms planned by the centre-right government to the country’s tax and payroll-tax system, it was the direct action taken by hospital doctors that had the biggest effect.

These developments also inspired a wider debate about the role of unions and whether they are able to resist the influence of political groups.

2011 saw hospital doctors and other health-care employees submitting their resignations and Slovakia’s teachers protesting in front of the Government Office in Bratislava to demand more funding for schools and better salaries. In assessing their demands, observers agreed that the teachers and physicians were right to seek higher pay, but said the timing of their protests was far from ideal and that some of their demands, especially in the case of the doctors, were unrealistic.

More than 9,000 teachers from every part of Slovakia gathered in front of the Government Office on September 13 to express their discontent with what they called inadequate funding for schools. They also warned that if the state failed to meet their demands by the end of September they would go on strike. However, they later withdrew that threat, acknowledging that, with the fall of the Iveta Radičová government in October, the interim government that replaced it did not have the mandate to fulfil their demands.

Unlike the teachers, however, doctors working in state-run hospitals stuck to their protest action, forcing a confrontation with not only their employers and with politicians but also with patients. Their mass protest was organised by the Medical Trade Unions’ Association (LOZ), and involved around 2,400 doctors, with 1,226 of them actually quitting their jobs in early December. Several hospitals were forced to work under a crisis regime despite the declaration of a state of emergency which in theory obliged doctors to report for work. Ironically, many of the physicians involved in the protest defied the order to work by calling in sick.

As a first step towards resolving the dispute, President Ivan Gašparovič, using powers he had acquired after the fall of the government, suspended the process of transforming state hospitals into state-owned joint-stock companies. A halt to the process was one of the main demands of the protesting doctors.

Negotiations between the doctors and the cabinet were concluded on December 3, 2011, when both parties signed a memorandum which fulfilled most of the doctors’ original demands. More than a week later, parliament amended the law to guarantee the doctors two salary increases, in January 2012 and July 2012, to insert changes into the Labour Code to allow them to take extra time off or get additional pay for overtime work, and to halt the transformation of hospitals.

Slovakia has seen several other rallies organised or supported by KOZ. Its spokesman Otto Ewiak explained that the major protests supported by the confederation were intended to express members' opposition to changes to the Labour Code, as well as to a planned reform of the tax and payroll-tax system drafted by the Freedom and Solidarity (SaS) party.

The largest nationwide protest was planned for October 12, 2011, but was shelved following the fall of the government a few days earlier, according to Ewiak.

“If, after the March election, the emerging government supports the tax and payroll-tax reform in its previous form, we will immediately carry out the rally,” Ewiak told The Slovak Spectator.

Ewiak said that KOZ was not enthusiastic about the amendments to the Labour Code, but did welcome the fact that the payroll-tax reform had been mothballed. According to the union confederation spokesman, the reform would have extracted larger sums from the wallets of citizens, all the while telling people that their net wages would increase by €4 to €5 a month.

As for the level of public support for KOZ activities, Ewiak said that due to the approach of the media, the public did not yet regard the employment situation and what he called “the effort of the unions to solve this problem” as being dramatic.

However, Ewiak also said that the role of the unions is to make the public active and this is what KOZ would also try to do ahead of the elections.

By contrast, two of the main bodies representing the interests of employers – the National Union of Employers (RÚZ) and the Federation of Employers' Unions (AZZZ) – strongly criticised trade union leaders.

The RÚZ wrote on its website on October 5, 2011, that the unions were systematically harming the economic interests of Slovakia and its citizens, while trying to prevent reforms that would increase employees' net income and reduce the jobless rate.

The RÚZ stated that the global economy was facing a new crisis that affected all countries, including Slovakia. They said that it was therefore imperative that the government takes reforming steps to increase the country's competitiveness and attractiveness to foreign investors, something which would help to create new jobs.

Martin Hošták, secretary of the RÚZ, told The Slovak Spectator that his organisation would welcome measures intended to stabilise the public finances and that it supported the reform of the tax and payroll-tax system and the increased attention being paid to the educational sector.

Branislav Masár, executive director of the AZZZ, told The Slovak Spectator that his organisation expects the next government to pass measures to improve the business environment and achieve sustainable job creation, while also devoting attention to the development of rural areas.