Choosing what to study and where

In December 2011 the number of unemployed young people who had recently graduated from secondary schools, high schools and universities in Slovakia stood at 30,798. They constituted a significant portion of the overall number of unemployed: more than 362,428 (December 2011), one of the highest levels for more than seven years. Labour market watchers warn that many school-leavers have difficulty finding jobs in the areas in which they have specialised. Their problems often start with their choice of school. 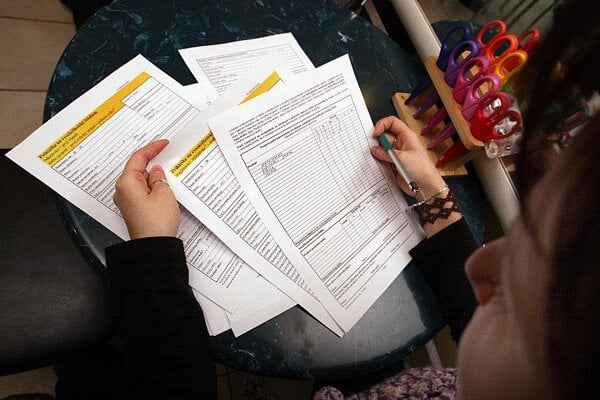 Labour market watchers warn that many school-leavers have difficulty finding jobs in the areas in which they have specialised. (Source: SME - Ján Krošlák)
Font size:A-|A+  Comments disabled

In December 2011 the number of unemployed young people who had recently graduated from secondary schools, high schools and universities in Slovakia stood at 30,798. They constituted a significant portion of the overall number of unemployed: more than 362,428 (December 2011), one of the highest levels for more than seven years. Labour market watchers warn that many school-leavers have difficulty finding jobs in the areas in which they have specialised. Their problems often start with their choice of school.

Even if future graduates know what careers they want to pursue, they typically choose what and where to study according to a range of factors including how far from home they are willing to travel, the impact that studying and travelling may have on their relationships with family and friends, and their target school's quality and reputation. Another important factor in their choice is the likelihood of eventually finding a job in the specialisation they choose.

Slovakia's Academic Ranking and Rating Agency (ARRA) tries to help young people choose the most appropriate faculty at which to study. Its annual ranking of universities and individual faculties is, according to its website, intended to improve the quality of education and research in Slovakia.

“It is gratifying that the quality of universities and colleges is becoming the subject of discussion not only for a limited number of experts, but also, thanks to the media, for the whole of society,” Ján Šajbidor, dean of the Faculty of Chemical and Food Technology (FCHPT) of the Slovak University of Technology in Bratislava, told The Slovak Spectator. His department has been ranked consistently as one of the country's best technical faculties.

The latest ARRA analysis looked at 109 faculties, including five faculties at private universities, which were then divided into 11 academic categories based on their specialisations. Even though the evaluation criteria have changed in recent years, several faculties have maintained the top position in their category for several successive years. For example, the University of Veterinary Medicine and Pharmacy in Košice has occupied the top spot in the agricultural sciences category for several years.

“We do not think that we have advantages compared to other faculties of Slovak universities that are evaluated by ARRA in the agricultural sciences category,” Emil Pilipčinec, the rector of the university, told The Slovak Spectator. “Our aim, first of all, is to provide education to graduates that will be good and will be well-accepted in the labour market.”

He added that the excellent results in rankings and ratings reflect the good reputation earned by the work of the school.

Šajbidor from the FCHPT said that the faculty has obtained its high ranking partly because it is “focused on quality research activities which are the necessary condition for quality education”.
He added that his university has a system of clear rules to evaluate the results of the faculty’s research as well as the work of teachers, and that these contribute to the competitiveness of the whole university.

Some categories saw new faces rise to the top in the latest rankings. For example, the Faculty of Arts of the University of Pavol Jozef Šafárik in Košice took the top position in the philosophy faculty category. ARRA praised the Košice faculty for the high number of its publications that appeared in international databases.

Among Slovakia's private universities, several faculties of the Pan-European University in Bratislava ranked highly, competing with the leading faculties at public universities which have typically topped the rankings in the past. Its Faculty of Economy and Business and its Faculty of Law were judged to be among the five best faculties in their respective categories.

Ladislav Kabát, the dean of the Faculty of Economy and Business at the Pan-European University, told The Slovak Spectator that this year’s evaluation “was and still is a nice surprise”, but added that the faculty had tried hard to achieve good results by emphasising and supporting research activities and then publishing the results.

What makes a good faculty?

ARRA’s evaluation process is based on two major areas – education and research – with various criteria assessed within each category. In the area of education ARRA looks at the ratio of students to teachers and the attractiveness of the study programmes, while the research area is assessed based on the faculty’s number of publications and citations, the availability of grants, and whether there is a PhD programme. ARRA’s criteria have been modified several times in recent years based on international trends for the evaluation of universities.

ARRA used four new assessment criteria for 2011: the mobility of students; the unemployment rate for graduates; the number of PhD students enrolled; and the faculty’s total number of publications and citations.

“Basically, the ‘winner’ at the top of the chart within each group has a large number of professors and associate professors and a small ratio of students per teacher, has been successful in receiving domestic and foreign grants, has quality publications, and has a high number of PhD students,” Ivana Kullová from ARRA told The Slovak Spectator.

The private schools face some disadvantages compared to public universities, mostly in the research part of the assessment, Kullová admitted, but nevertheless they received very good evaluations in the education category.

“They [the private faculties] had a very low ratio of students per teacher and a large number of professors and associate professors,” Kullová stated, adding that the Faculty of Law of the Pan-European University in Bratislava had the largest number of foreign students.

There are several factors that decreased the final ranking of many of the faculties. One was a significant drop in the number of research grants, by as much as 40 percent in some cases, according to the ARRA report. This can be partially explained by the failure of the Slovak Research and Development Agency to announce any competitions for grants at universities for some time, Kullová told The Slovak Spectator.

Universities also have a problem with what Kullová called a “PhD students’ paradox”, meaning that some schools have many doctoral students who have not contributed very much to their faculty’s research. Kullová said this trend could have been influenced by state financial contributions which schools received for each enrolled PhD student.

“A faculty should have a large number of PhD students not because it is financially advantageous but because it actually focuses more on research than education,” she told The Slovak Spectator.

The deans of those faculties ranked as being among the best in Slovakia agree that a positive evaluation by ARRA cannot be the only thing that they use in their presentations to potential future students.

“The FCHPT makes regular surveys among our students to learn what information (motives) helped them to choose our faculty,” Šajbidor told The Slovak Spectator, adding that the majority of students rely on information from the internet, teachers and friends, while the information provided via specialised events, such as various education fairs, were among the least influential factors.

Kabát added that students often make their final choice after learning about the facilities and possibilities provided by schools for their students, as well as their graduates' success finding jobs after leaving school, and their starting salaries.

One step towards providing more comprehensive information about higher education institutions was taken by the Education Ministry led by Eugen Jurzyca, a nominee of the Slovak Democratic and Christian Union (SDKÚ), at the end of December 2011. It promised to publish information about graduates' success in finding jobs, the SITA newswire reported. The ministry has already started publishing data about the salaries and the unemployment rate of university graduates.

“One of the main aims of the new management of the ministry was, immediately after taking up the function, to decrease information inequality,” Education Ministry spokesperson Miriam Žiaková told The Slovak Spectator, adding that the public should receive enough relevant information to help students choose a future school.

“Releasing such information should also be the aim of schools because when [a school] has good results, it also increases its competitive advantage in the market,” Žiaková said.

Under the ministry plan, the schools are responsible for contacting their graduates and gathering data, which will then be published on their websites.

Future university students should learn about what jobs have been obtained by each school’s graduates, according to the rector of the University of Constantine the Philosopher (UKF) in Nitra, Libor Vozár. Yet he warns that the success of graduates in finding jobs also depends on their region, something which is not taken into account by the ministry.

“Moreover, the statistics reflect the current situation in the labour market which is, partly due to the ongoing crisis, changing dramatically depending on economic measures, but also political decisions,” Vozár told The Slovak Spectator.

Releasing information about what jobs university graduates get will be crucial for distinguishing the quality of individual education programmes, according to Lucia Kleštincová from the Economic Policy Institute (IHP), a think tank led by František Palko, who served as state secretary, i.e. deputy minister, at the Finance Ministry during the Robert Fico government.

The number of jobless university graduates is a result of the fact that the economy is unable to produce jobs that reflect their chosen professions, Kleštincová told The Slovak Spectator.

However, Vozár said that the jobless rate of Slovak university graduates has, during the last ten years, been either lower or the same as the average across the European Union.

“Moreover, it should be noted that as the labour market is very dynamic it is quite natural that graduates will try many professions, even ones outside their primary university qualification,” he concluded.